Imagine an alternate Survivor universe, where, in the first season back in Borneo, instead of “alliance,” Jeff Probst asked villainous mastermind Richard Hatch: “Richard, is there a we?” And in response, Richard looked up at Jeff and calmly said, “No, I don’t think there is a we.”

In a season that has tried desperately to shed itself of the term “alliance” for the trendy new “voting blocs”, last night’s episode of Survivor Second Chance went entirely off the deep-end. When Jeff and the remaining castaways started referring to alliances as different groups of “we’s”, it turned into an equally baffling and hilarious tribal council. I’m trying to work out which made less sense, Keith Nale’s reward choice explanation or the “we” talk. That is what 35 of days of Survivor will do to you. 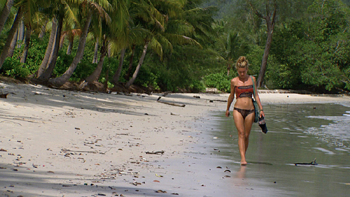 For all the tribal confusion, the episode itself was relatively drama free; this was odd given that the person that went home was Abi-Maria. Abi and her histrionics dominated the pre-merge. If she wasn’t telling people they were dead to her, she was accusing them of petty larceny or undermining their personal hardships in life. Her irrational, unpredictable behavior was a major source of drama and the cause of many volatile vote-offs. But after the merge, Abi drifted further and further into the background, as the strategic players stepped to the forefront.

I imagine that being in an alliance with Abi is like walking around a homeware store with a toddler and telling them not to touch anything. No matter how many times you tell them, you know that eventually, they’re going to knock that expensive vase off the shelf, smashing it into a thousand little pieces, and then you’ll have to pay for the damage. The best advice is just to stop taking that toddler into homeware stores. The best advice regarding Abi is just to stop taking her further into the game. With numbers decreasing, and everybody looking for an alliance they could trust to take them to the end, the reliance on Abi for a vote became far too much of a chore.

When the vote came down to either Abi or Tasha, it was clear that Abi was the one about to get her torch snuffed. Not only could you tell that her fellow tribemates had reached the end of their tether trying to appease her, but the edit played up her delusions throughout the episode; bragging about her “resume” and deciding whom she wanted to take to the end with her. The decision by Spencer to stick with the Jeremy and Tasha alliance sealed Abi’s fate. Spencer would have loved to have sat next to a goat like Abi at the final tribal council. But if he chose to go with the Abi/Keith/Wentworth trio and target Tasha and Jeremy, he’d be putting himself in a position where he’d be the biggest threat left in the game. At that point, his “goats” would be stupid not to get rid of him before the finals.

When Tasha described that potential final three as an “abomination”, it was hard to tell whether she believed that or whether she was just using it as a strategic ploy to get ‘students of the game,’ Jeremy and Spencer on board with her plan. But telling us that “the fans” wouldn’t want that is ridiculous given that Abi, Keith, and Wentworth were all voted onto the season too. Not that Kelley Wentworth is a goat by any means. She has consistently adapted to a fast-moving game and is an excellent successor to Sandra’s “as long as it isn’t me” strategy, as we saw when she let Keith and Spencer call out the targets during their reward. 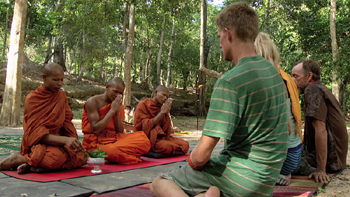 The reward at the temples of Siem Reap was beautiful and a fantastic incorporation of the host country’s culture; something that Survivor has lacked for many years now. It elevates Survivor above every other reality-competition program when it can draw inspiration from other cultures. Watching Keith stumble over temple ruins and compare the experience to an Indiana Jones movie was just perfect. Less perfect was Keith trying to explain why he picked Spencer to join him rather than Jeremy and Tasha, “Err, well, you see, Spencer has a girlfriend, and err, he loves her, and I don’t remember none of ya’lls names… *spits*”. Never change Keith.

If the vote-off was relatively straightforward, and the reward a relaxing break, then the only real drama of the episode was at the immunity challenge. And I don’t mean when Jeff tried to force the second chance theme down our throats by pretending the puzzle was looking for redemption. No, I mean Tasha almost drowning. The mental and physical fatigue these players are experiencing becomes more and more evident each episode. Last week, Joe collapsed when his body gave out on the challenge, and the same thing happened to Tasha this week but in the ocean. In these moments the game stops for a few minutes, and we get to see a more human side of these characters. Abi comforting Kimmi as the medics checked on Tasha was a surprisingly tender moment. 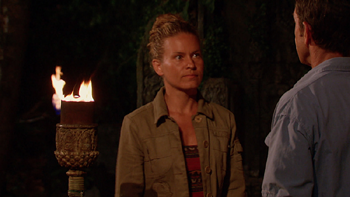 For all of her craziness, Abi got to leave in one of her saner episodes. I’m not quite sure yet why Abi voted for Keith. Maybe she didn’t like that he threatened to come and find her in Brazil and kill her in her shitty apartment if she flipped. I may have added on that last part, but that would have been the scene had Shane Powers made it onto the season instead of Keith. Abi apparently trusted in the wrong ‘we’ and ended up leaving in the penultimate episode, just like her first time in the Philippines.

Tune in next week to the season finale and find out what the castaways are calling alliances next. Maybe they’ll just start referring to them as “things”? “Yeah, I’m in a thing with this person Jeff, but I’m also in another thing with that person.”

[Credit to SurvivorAddict for the GIFS]

4 responses to “Survivor: Cambodia Episode 13 Review – We, Myself and I”