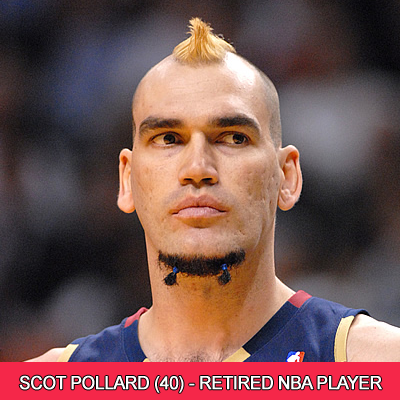 Scot Pollard is a 40 year old retired American professional basketball player that had an eleven year career in the NBA. Pollard attended the University of Kansas and was the 19th pick of the 1997 NBA draft, he spent the majority of his career playing for the Sacremento Kings and the Indiana Pacers, and was known for his defensive play and funky hairstyles. He won a championship in his final season (07-08) with the Boston Celtics despite only playing limited minutes during the season, he retired soon after in 2008. Pollard now lives in Carmel, Indiana with his wife and children.

Scot Pollard marks the second former NBA star to appear on Survivor after Cliff Robinson who competed on Survivor: Cagayan last year, Pollard will be hoping to achieve better than 14th place. With his professional sports career Pollard will be a part of the Brawn tribe on Survivor Kaôh Rōng – Brawn vs Brains vs Beauty 2.