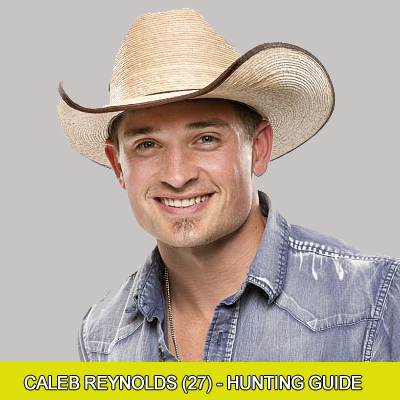 Caleb Reynolds is a 27-year-old hunting guide originally from Dallas, Texas and is best known for being a housemate on Big Brother 16 which aired in 2014. Reynolds, who often referred to himself as the Beastmode Cowboy, finished in fourth place on Big Brother. He headed an alliance called the Bomb Squad in the early portion of the game and showed unwavering loyalty to his team-mates. However, he lost focus on his strategy when he became infatuated with fellow housemate Amber Borzotra. He is tied for the most Head of Household competition wins in a season at 4, and is the only male housemate to win four complete HOH reigns and not win the game. Now living in Hopkinsville, Kentucky, Reynolds initially applied for The Amazing Race with his friend before being recruited for Big Brother and now Survivor.