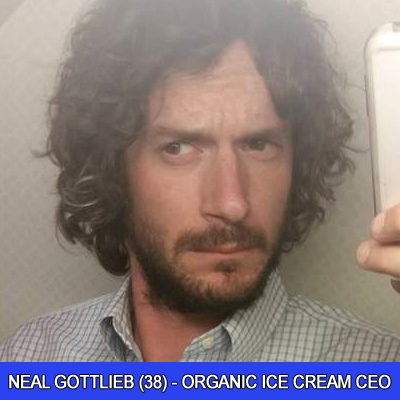 Neal Gottlieb is 38 years old and the founder of Three Twins Ice Cream. Currently living in Sausalito, California, Gottlieb started his organic ice cream company in 2005 after pumping his entire life savings into the venture. He worked 90+ hour weeks at a one man scoop store in San Rafael until he eventually started selling at farmers’ markets and restaurants, now six years later the company is thriving. He graduated from Cornell University in 1999 with a degree in Consumer Economics and Housing and was also co-captain of the university’s varsity lightweight crew. He is a keen adventurer that has climbed Mount Kilimanjaro, hiked the Inca Trail to Machu Picchu, and driven an ice cream truck solo across the United States in 93 hours. He also lives on a 27′ sail-boat called The Incorrigible.

Neal Gottlieb is the latest in a long line of Ivy Leaguers to appear on Survivor. Dan Barry from Survivor: Panama and Matthew Von Ertfelda from Survivor: The Amazon also graduated from Cornell, and last season featured Max Dawson and Shirin Oskooi, both Brown University graduates. This makes Gottlieb the third Ivy Leaguer on this current cast alongside Aubry Bracco and Cydney Gillon. His Ivy League credentials place him on the Brains tribe on Survivor Kaôh Rōng – Brawn vs. Brains vs. Beauty 2.