While Survivor SA continues to deliver on compelling characters and endless shenanigans, this episode served a bridge to the next phase of the game. The troops are preparing for battle, and what we saw this week reflected that. There was not a great deal of new information learned; no game-changing decisions or betrayals. Instead, circumstances we already knew about were emphasized as the players and the viewers get ready for the battle ahead.

After voting off Dino, the current core of Zamba is undeniably Tyson, Kiran, and Wardah. Their loyalty to each other is enduring, and now the game is finally going their way. This trio was already aligned early on, but their mutual dislike of the rival tribe members has solidified their bond even more so. Tyson wants swift revenge on the players that treated him like an outcast before, and Wardah has her Hit List to avenge Carla. At no point here does it feel like they are in danger, leaving the spotlight fixated on Qiean, Santoni, and Anela.

As the only reasonable candidates to be voted out, the three remaining Zamba members have to fight for their place to stay. At this point, they all have reasons to be voted out. Anela is without a vote and a huge liability for his rivals. Santoni’s more vulnerable than ever before after just playing her idol. She’s built herself a reputation for playing the middle, and her actions have made it evident that she doesn’t trust any of them. Qiean’s been a quiet presence throughout the season and has the weakest social connections. This, on top of her tendency to eat her past rewards in front of her tribe members, is grating on everyone (but it is pretty funny to watch).

More of the Same from Vuna

Meanwhile, Vuna maintains their edge and continues to thrive together. After coming out victorious again at this immunity challenge, they work to sustain their numbers by sending Anela to Immunity Island again. Anela’s allegiance to his original alliance members, along with Wardah’s open dislike for him, only better the new Vuna’s odds in the merge. The chances for Anela to defect are shrinking before our very eyes, especially now that he’s in debt to them twice over.

Vuna’s success gives them a strategic edge, but this particular triumph also includes a much sought-after reward. As part of their win, the tribe gets to enjoy a Mexican feast, as well as videos from home. With Vuna’s players losing a lot of screen time from avoiding tribal, this reward allows us to get a look into their lives outside of the game and get to know them a little better. The heartwarming moment serves its purpose like all family-related rewards, but other than that, there’s not much to say about Vuna as a whole.

Of all the current Vuna members, Renier is setting himself up as the one to watch. He’s covering all his bases by forming social connections that cross tribal lines, first with Tyson and now with Chappies. Renier is well aware that Chappies wants to be surrounded by competent, trustworthy players. He has that with Santoni, and Renier has maneuvered their conversations to ensure he feels safe with him too. To the viewer, it’s unmistakably apparent that Renier is in the best position of that bunch. What isn’t as obvious is if other players are catching on to his social capital yet. It doesn’t appear that he will be in danger any time soon, but his game is toast the moment anyone realizes just how big of a threat he is setting himself up to be.

By this point, we’ve only seen small segments of Anela as a player. There’s enough to understand his decisions, but not quite enough yet to determine how big of a contender he is for the win. Here, Anela begins to make his case. After Dino’s exit, he lies to his tribemates about his time on Immunity Island, telling them he won an extra vote that he can use up to one vote after the merge. He doesn’t want them to realize just how vulnerable he is, as he’s not expecting to go to Immunity Island again.

Much to his surprise, and Qiean’s distaste, he does get picked for Immunity Island again. Instead of a challenge, it’s smooth sailing for Anela once he chooses to Stay & Play. In an ironic twist of fate, he is rewarded with his own Mexican feast, a video from home, and a Steal a Vote advantage. This advantage can only be used for two rounds, essentially meaning that Anela’s previous lie is now somewhat true. He still lost his vote for his next Tribal, but at the very least, he’ll be able to earn back the vote he lost and deprive someone else of theirs (my money’s on Wardah). 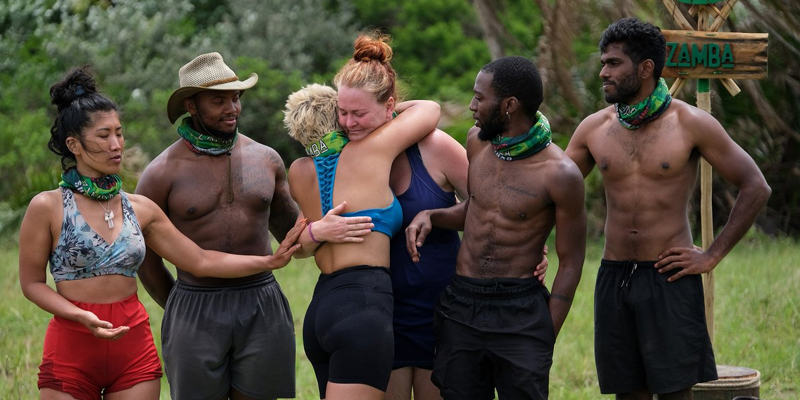 Anela having this advantage could be the deciding factor in the first merge vote, which is great for original Zamba, not so much for original Vuna. Even after all this time apart, Anela has not given any indication that he will betray his earliest alliance, especially now that they directly saved him from getting his torch snuffed twice. We know Anela is not above deception, but with all the talk at Tribal Council about him owing them his game, it’s hard to imagine anything else he could do.

With Anela officially off the table, the vote’s going to come down to Santoni and Qiean. Santoni’s notoriety has made her a liability for players like Tyson, Kiran, and Wardah, who are in desperate need of loyalty for the next phase of the game. Her paranoia from the last vote is rearing its ugly head here too, which only serves to let Tyson and Kiran know that she still doesn’t fully trust them.

Despite the hopelessness of her situation, Qiean refuses to go down without a fight. The assumption on Zamba right now is that Chappies is running the show over at Vuna. She argues that if that is true, then why would they keep Santoni around? After saving her in the swimming challenge, a moment that has a lasting impact on Santoni even in this episode, it’s safe to assume that she’s not going to flip on Chappies anytime soon. It is a good pitch, but the trio is concerned that they don’t know Qiean like they do Santoni. Their decision comes down to whether they want to go with what they know or forge a new, riskier path.

Despite Anela being safe, he catches a lot of heat at Tribal. Qiean calls out his relationships with Renier, Chappies, Shaun, and Amy, leading to Wardah piling on with his refusal to work with her, possibly because she’s a woman. It’s a lot of back and forth that doesn’t make a lot of sense, because whether they like it or not, Anela is safe because of the connections he has on Vuna. In the end, Qiean’s flimsy relationships with her original and current tribe is her downfall, and she is voted out unanimously.

To put it bluntly, Qiean was a pre-season favorite that never got her time to shine in the actual show. My hope was that she’d be able to break out on her own once the game reached the individual level, but she just missed making it there. She had a lot to offer, and while Survivor SA does a lot of things right, they fell short with her edit. Nevertheless, Qiean made history by taking part in the show, and I’m more than confident that her time here will pave the way for more inclusion in the future.

The next episode preview confirmed what many were expecting; we have now reached the merge. Given the current demographics of the remaining players, this couldn’t have been a more perfect spot to start the individual game. Of the 12 players left, 6 are original Vuna members and 6 are original Zamba. There is also an even split between men and women, which could serve an interesting role in the future of the season. The topic of sexism in the game has been openly discussed numerous times already, so it’d be irresponsible to discount the gender divide as a potential factor moving forward.

What is undeniable is the fact that original tribal divisions will come into play, to the benefit of some and the detriment of others. For now, the advantage lies with OG Zamba. They’re the more tight-knit group of the two, and they lucked out with having Anela be the one to be separate from them for so long. He has the Steal a Vote advantage and steadfast commitment them. The fact that they sent him to Immunity Island twice in a row indicated that they still value him as an alliance member. However, we’ve seen on several occasions that Anela is not above sneaky moves, and they have a wildcard in Shaun to contend with as well. So, while Zamba has the edge, they’re far from the perfect unit.

The original Vuna members have an uphill battle ahead of them. They are without a doubt the more complex tribe of the two, which is excellent for us watching at home, but not so much for a group that will probably have to stick together for the time being. They’re likely to have one of their votes stolen by Anela, and two of their members, Santoni and Chappies, are liable to flip at a moment’s notice. Still, all hope is not lost for them. Tyson has an idol and Anesu has a Tribal Council pass, so they may be down, but they’re certainly not out. With this cast and their penchant for blindsides, anything is possible heading into the next phase of the game.