Last Thursday, we opened up a fan poll for Inside Survivor readers to vote on their Player of the Season for Survivor: Kaôh Rōng. You were able to vote on any of the 18 castaways that participated on the season. Over 1500 people voted and the winner earned over half of those votes. 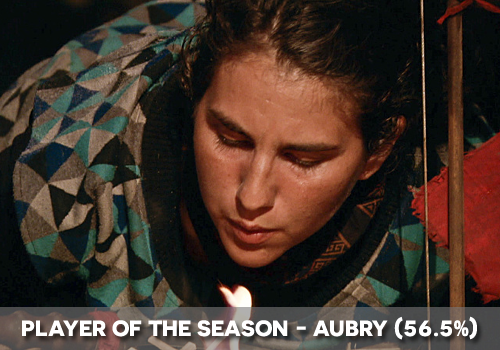 Aubry Bracco, the Social Media Manager from Cambridge, MA, finished as runner-up to Michele Fitzgerald. Despite falling short at the end, Aubry displayed a never give up attitude throughout the season. Even though she faced many obstacles – a Day 2 breakdown, losing her two closest allies due to medevac – she managed to pick herself up and power forward. Aubry was on the right side of the vote at every tribal council she attended (nine!), apart from her Peter vote when Liz Markham was eliminated, which was part of a successful split-vote plan. She dictated most of the post-merge vote-offs alongside her partner in crime, Cydney, and her manipulation of Tai led to the biggest blindside of the season (the Scot elimination).

Due to her tenacity and ability to control the votes, fans have crowned Aubry the Survivor: Kaôh Rōng Player of the Season.

Want more Survivor: Kaôh Rōng content? Then check out our other features such as Episode Reviews, Edgic, Power Rankings, Swaney Strategy Blog and Next Time On… Survivor.

12 responses to “Survivor: Kaôh Rōng Player of the Season (Results)”