It’s the merge! And if that isn’t exciting enough, we have a 2-hour episode this week with two boots!

So the preview begins with the merge feast—nothing much out of the ordinary. We see the 13 players left in the game celebrating the milestone, unveiling the blue merge buff. Worthy to note is that there are no idols and advantages left in the game at the moment, but there’s probably one hidden on the merge beach. The rest of the trailer is pretty messy, especially because the scenes could be picked out from over two Tribals worth of content, so I’ll just do my best to unpack each scene briefly and then make some general predictions for the episode!

First up, we hear Kellee targeting old Lairo. She likely is reconnecting with her old Vokai tribemates, including Lauren, Tommy, and Dan, who were on the swapped Vokai tribe, and Janet, Noura, and Jamal, who were on swapped Lairo with Kellee. With a one-person advantage, taking out someone from old Lairo would be an easy move if they decide to stick together. But Survivor isn’t that simple, is it?

Next, we have Dean thinking to Tommy, “we flip now.” These are two people who were left in the minority on their swapped tribes. This scene is interesting because Dean and Tommy have never met prior to the merge. The closest interaction we got was Dean commenting on how he lost the basketball portion of the challenge to Tommy a few weeks ago. I’m guessing that they are aligned with people on old Vokai, but are thinking about flipping.

Speaking of Tommy, the preview also reveals him telling Aaron, “we want Kellee out.” Here, I’m thinking that “we” refers to Tommy and Lauren, who were shown to be tight in the last episode, or Tommy and Dean. I feel like this conversation is happening as Aaron and his alliance (likely to be Elaine, Missy, Elizabeth) are gathering numbers to control the vote. To me, this scene comes together with the previous one and raises Tommy as the deciding vote between two alliances. 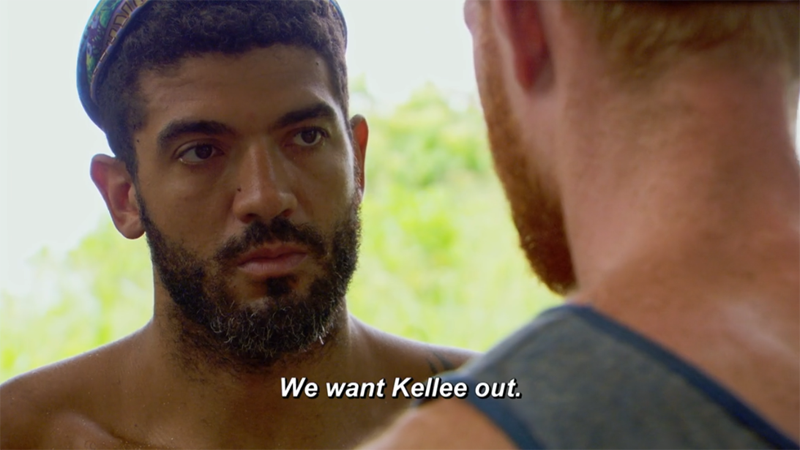 We then get a short clip of Elizabeth asking Missy, “is that a lie?” which, to me, feels like a normal discussion corroborating information. I think that Missy and Elizabeth are very much working together, at least until things are shaken up. The next scene reveals Elaine speaking to Dan, saying that “she just told us to vote you” while the visuals cut to a shot of Kellee, Lauren, and Janet. I think “us” refers to Elaine and the other Lairo members, and “she” refers to Lauren, who was on the same swapped tribe as Elaine.

And finally, we have Lauren telling Missy that the plan is to vote her. It’s interesting, but also believable, in my opinion, that Lauren seems to be working with Missy again, after the brutal blindside of Jason. I’m guessing she’s referring to a plan that will not be successful, and Lauren is warning Missy but also giving her a head’s up that she might receive some votes during Tribal. Fortunately or unfortunately, this doesn’t sit well with Missy as she doesn’t like her name being used, even if she’s safe.

So… here’s what I make of the preview for the merge episode: I think the players will fall back to their original tribe alliances at the beginning of the episode. Original tribal lines were indeed rather clear on the swapped Vokai tribe, although we did see relationships formed across the lines with Aaron, Missy, and Lauren. On swapped Lairo, though, things were quite blurred, with Karishma completely jumping ship and Dean working with Kellee. I feel we’ll catch a moment of old tribemates reuniting and tentatively deciding to stay together. 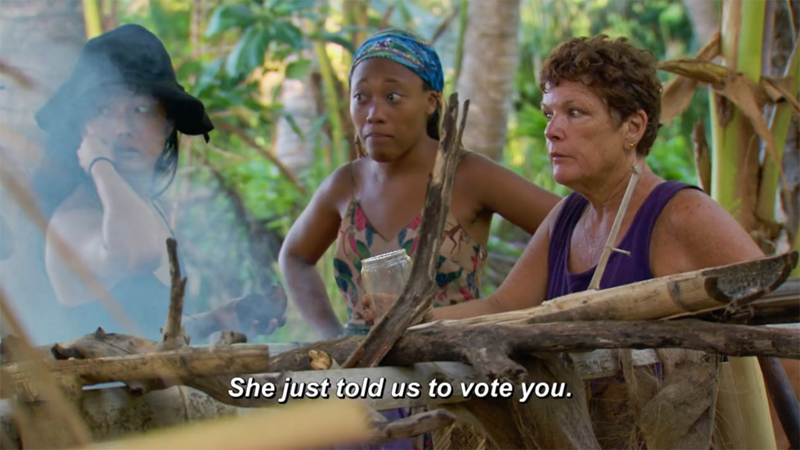 However, I’m quite sure this plan isn’t able to persist throughout the two hours. It does seem like Missy, Elizabeth, and Elaine are sticking together. And so is the parallel of Janet, Kellee, and Karishma. With the bridge of Lauren, who was an original Vokai member, and then stayed on the swapped Vokai tribe, I’m predicting that we’ll see these two groups join forces for the first boot. They could also pull in Dean, Tommy, and Aaron as collaterals to form an easy majority to vote out someone like Dan or Jamal.

With lots of uncertainty and a whopping 13 votes to account for, I think that the first merge boot will be a safe one that players will smartly decide upon with less confusion and multiplicity. The next vote, then, would be a little trickier, with individual members deciding whether to stick to original tribe lines or their newly formed relationships.

I feel that one possible decision would be on Missy, Elizabeth, and Elaine’s part—whether to join the Vokai women or to take them out. This would explain the conversation between Elaine and Dan in the preview. As for the guys, I feel like they too would be making the decision whether to join that dominant group of Vokai women, or to jumpstart a new alliance in opposition—this would explain the scenes of Tommy, Dean, and Aaron.

All in all, a very uncertain but exciting look into the merge episode of the season. If I were to make a guess, I think Dan’s time on the island is up, and so is either Noura’s or Tommy’s. What do you think? Leave a comment with your wild predictions below!