Today’s blog is going to be a shorter piece for two reasons. One, the upcoming twist makes it really difficult to think about predictions, and two, I’ve been procrastinating writing, and it’s a little too late now!

The NTOS and preview trailers of Episode 9 are pretty similar. Both reveal that there’s going to be a double elimination, with Jeff saying, “there will be two people going home.” We also see two Immunity necklaces as he announces this. From the overhead shot of the challenge set up, we can identify six purple and five orange stations for the individual Immunity challenge. This probably means that the eleven players will be split into two groups—five and six—and will compete for Immunity separately. Following this similar arrangement last seen in Ghost Island three seasons ago, the two groups will attend Tribal Council separately and vote out one player each.

After last week’s episode, there seems to be a clear majority and minority on the merge tribe. Left out of the voting plans were Janet, Karishma, and Noura, while the majority alliance consists of Missy, Aaron, Elizabeth, Elaine, Tommy, Lauren, Dean, and Dan. Things aren’t looking great for the three women in the minority unless they somehow all end up in the same grouping during the Immunity challenge.

In the trailer, we view a short sequence of Aaron and Dean discussing the vote, with Dean commenting, “hopefully it’s Karishma and Janet,” and Aaron in a confessional saying that they can get “two for the price of one.” This likely confirms that the twist splits the two, and suggests an easy vote for the majority alliance. But this alliance is far from crack-free—we next see Elaine telling Tommy that Missy wants to vote him out. 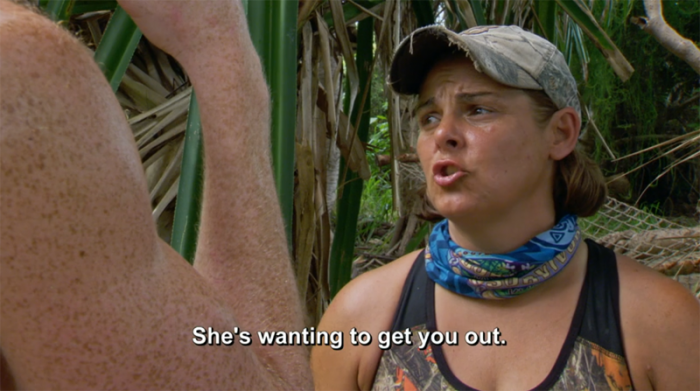 After the blindside on the swapped Vokai tribe, I don’t think it will take much for Tommy to be distrusting of Missy and Aaron. As such, I think that Tommy, Lauren, and Dean will be on the same page to cannibalise this lofty majority alliance and flip on Missy and friends. Depending on the splitting of the tribe, I think it’ll be rather easy to pull the women in the minority on board to vote out one of Aaron, Elizabeth, or Missy, who have been portrayed as a tight trio for some time now. Supporting this idea, we do see Karishma and Elaine for a very brief moment, seemingly in discussion alone as well.

And lastly, for a split second in the preview trailer, a shot of Lauren, Noura, Missy, and Aaron comforting Elizabeth is included. I’m hoping— although, ideally, this shouldn’t even be necessary—this comes as an aftermath of what happened last week, and not a fresh incident involving Dan.

By way of conclusion, here are my boot predictions for this week’s double elimination episode: I’m guessing that Elizabeth, Missy, and Aaron will get targeted. However, it’s also probable that Aaron wins the Immunity challenge again, especially with a smaller number of competitors with the twist. So, I feel like either Elizabeth or Missy becomes one of the boots. And someone in the minority—Janet, Karishma, or Noura—gets easily voted out as well. If I were to pick, I’m guessing Noura and Elizabeth gets eliminated.

Leave your predictions in the comment section below, and here’s truly hoping that Dan leaves our television screens.

3 responses to “Next Time On Survivor – Episode 10”