Next Time is back! This is a blog all about decoding previews, commercials, and previous episodes in order to predict what’s coming next on Survivor.

As always, this blog is 100% spoiler free speculation, and I look forward to reading your predictions as well. Comment below or tweet at me @JacobDerwin!

Part One: Previously On… Survivor

Last week was like getting three consecutive X buzzers on Family Feud.

Grade: CBS revealed last week’s tribal twist ahead of the episode, so my predictions were a little flawed. I updated last week’s blog the day before the episode to say that I still thought Hali was most in trouble if Mana went to the double tribal due to a variety of problems. Instead, people were begging her to stick with them, and she wasn’t even on the chopping block. Basically: fool me once, shame on you. Fool me twice? F.

Grade: Literally wrong about everything. Tavua won immunity, and the other two tribes won reward. Another F.

Grade: Michaela was uncharacteristically quiet and JT is in so much trouble. F!

Grade: I’d like to briefly redirect you to Josh Wigler’s Twitter account where he recorded the live Know It Alls audience reaction to last week’s vote. Also, F.

The Live Know It Alls audience reacts to the Red Wedding. #Survivor pic.twitter.com/TcYyfjG9n7

Last week was exciting and rough for a lot of us (especially the Survivor Facebook page frequenters), but maybe we can learn from our mistakes this week… probably not. But we can try, gosh dang it!

I’m flabbergasted. Don’t get me wrong, I love JT and nothing can tarnish his game in Tocantins for me. But damn, straight-up telling Brad who Nuku was voting for was an enormously big mistake. Put bluntly, JT got played. Malcolm was his best chance of surviving Nuku, and now he’s gone and shot himself in the foot… make that both feet.

When I read next week’s episode description with all this in mind, there was a pretty clear idea of who it was talking about.

“One castaway searches for an immunity idol they desperately need in order to stay in the game, and another castaway throws their game off balance after they lose their cool.” 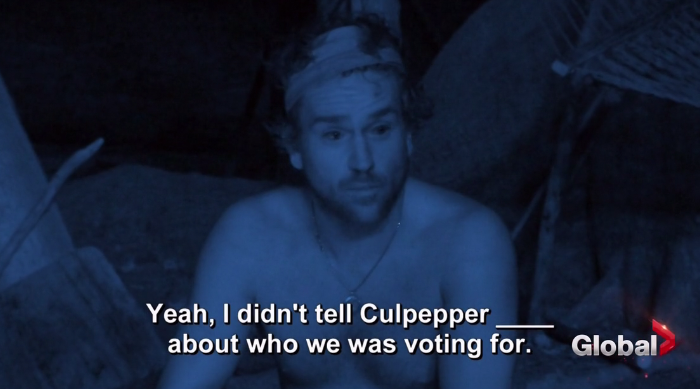 We’ll get to the second part in a bit, but the first part should be obvious. JT may have been unsuccessful during his first idol hunt, but he has no choice but to find it this time around. And chances are, if we’re getting another idol searching montage featuring the cowboy, he’s bound to find it.

During one of Malcolm’s exit interviews (I believe it was the RHAP one), he mentioned how the whole tribe went on an idol scavenger hunt before tribal council in hopes of getting an edge up on the other tribe. No one found it then, but now they know where not to look. It’s been narrowed down quite a bit for JT, so it’s not super unbelievable to think he might come across the clue pretty quickly during his next hunting session. Whether he’ll have to grab the idol at a challenge or from somewhere around camp: I have no idea. But I thoroughly believe JT will be pocketing himself an idol this week, regardless of whether Nuku goes to tribal council.

Back in Kaoh Rong, Debbie was one of my favorite players. Not because she was particularly good at the game, but because few people are just so unabashedly themselves at all times. And I love that. I love people who are genuine individuals. And yeah, a little crazy makes good television.

But this? This isn’t what I asked for. It appears Debbie has become aware of herself, almost like a cartoon character who realizes she’s in a cartoon and therefore begins to act more like what she believes is “cartoony.” I tuned in for My Neighbor Totoro, and I somehow ended up watching Ren and Stimpy!

Everything we see of her in the previews for this week’s episode looks and sounds as pre-planned, overdramatic and as hammed up for the cameras as possible. Debbie is no longer a lovable nutball with a thousand jobs and a bedroom full of completed puzzles. Debbie is now an airtime hog, overdoing it for the sake of making the episode, or maybe because her tribe is heading back to Tribal Council and she wants to make sure her boot is as big as her ego. 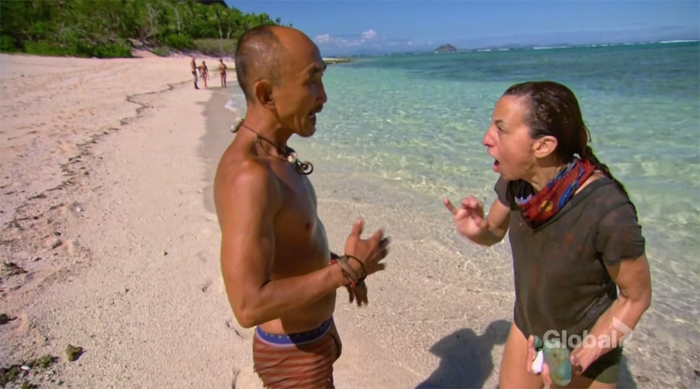 But, since it’s in the preview, I feel a need to try and determine what it is that has set Debbie off and sent her towards a second potential heat stroke.

The first, probably more dramatic shot in the preview, shows Debbie sitting on a rock formation with the tribe. She’s talking to Brad, who is seated behind her. “I was loyal to you completely,” she says, before spinning around in her seat to aim her words directly at Culpepper, “and you crushed my heart!”

We get two other screaming Debbie shots: one of them shows her and Sierra, Hali, Brad and Tai in a circle by a tree with a Tai confessional under it, “I got really scared,” as well as some more Debbie dialogue, “I don’t explode in anger.” The other shows her and Tai on the shoreline where she shouts at him, “Not a little! None!” as Tai tries to get a word out.

Frankly, the only thing that warrants this kind of blow-up is finding out you’re a target for the next vote. At that point, causing a ruckus might actually be the only strategic thing you could do to move the target. “Oh, you’re voting me out? Why would you do that? I’m easy to beat at the end. Who wants to vote for the crazy lady who made everyone uncomfortable?!”

For half-a-second, I thought that maybe Brad had given Debbie bad information during the double tribal, but upon rewatching, Debbie voted for Malcolm and was in on what was going down essentially the whole time. In fact, on a side note, during the tribe huddles, Debbie whispers to Brad at one point, “who am I voting for?” Brad responds, but it’s bleeped out. At that point, I should have already known that someone from Nuku was going home because we’d heard Sierra’s name a dozen times by then.

But upon further reflection, I considered the following: what if there’s a reward challenge coming up that gives the winners a choice to give away the reward for some other option? I mean, it’s a tad early for a letter from a loved one, but I feel like Debbie’s crushed heart might be from a lost opportunity to hear from her family. What if Mana wins reward, gets to pick from love and food, and the majority chooses the food over the love against Debbie’s will? This is the scenario I find most likely to play out this week.

…Or at least it would have been until this week’s sneak peek was released on YouTube. It’s like CBS is screwing with me on purpose this season, I swear. For those who haven’t seen, Jeff reveals that the reward is peanut butter and jelly sandwiches. Perhaps Debbie is just really bummed about not getting her PB&J on.

A ton of people have Sarah as their winner pick. To be perfectly honest, I don’t get it. Nothing against Sarah, her approach to the game this time around feels like a good adjustment from Cagayan, but she hasn’t had to prove herself at a vote yet. In fact, with the exception of Troyzan, no one at Tavua has had to go to tribal yet.

“I’m completely playing this game like a criminal… I know how to lie to these people” is the confessional quote we get from Sarah during the commercial spot. 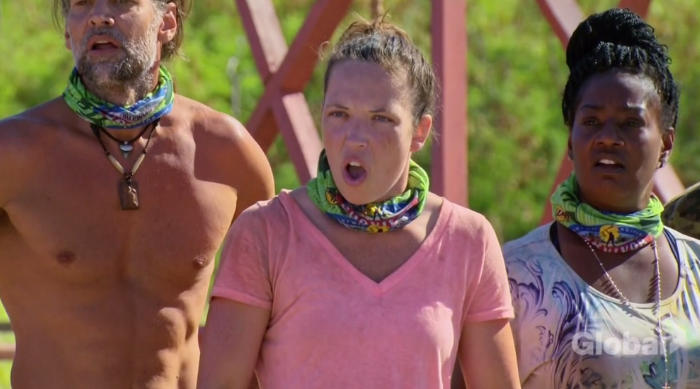 But like… why? Once more, most of Tavua hasn’t even been to tribal yet, and that same majority are all original Nuku. I mean, yeah, when you’re setting up your alliances and moves for down the road, you might have to shop around and lie to some folks. But why brag about how good you are at lying when you have an easy majority vote ahead in Troyzan (assuming that nobody knows about the idol)?

I think Sarah’s little bit of dialogue in the commercial might be a big indicator of events to come this week. If Tavua loses immunity, and Sarah is overplaying and making the rest of her tribe anxious, it wouldn’t be hard for Ozzy, Andrea, Cirie and Zeke to pull in Troyzan to knock out Sarah for safety’s sake. When you start playing too hard too soon, people get spooked. All the rest of Tavua would have to do is ask Troyzan nicely, and bam, criminal caught in her own web of lies.

For this season’s blog, I’m deciding to add a new section dedicated to winner picks and final tribal council predictions. There’s a lot of speculation about these things, often using the power of Edgic or looking for editor hints. I’m not gonna do any of that. I’m simply looking at the cast and determining who I think has the best shot of making it to the end based on their strategic, social and physical chops, and how they prove those chops during the season. Maybe with a dash of how the show is presenting them.

So… time to make a new winner pick, eh? Malcolm felt like such a safe bet, but I suppose in a season like this, the usual safe bets aren’t so safe.

I’ve written a little bit previously about how I liked how Andrea and Hali were looking, but then last week I was 100% certain that Hali was about to be voted out. Being as wrong as I was, I think it’s time to reconsider her standing in the game. Instead of being the easy target, Hali became an odd kind of swing vote, who correctly pulled off what JT was trying to do. She warned Nuku. She told them to vote for Brad. And when she sat back down, she told her tribe that she was trying to change Nuku’s plans to give Mana the advantage.

The truth is, had Nuku voted for Brad; Brad would have gone home. And had Hali been caught, she could have been in a lot of trouble. But, despite the arm tugging and the threats, Hali stayed confident and earned the confidence of her tribe by voting with them, and kept her ties to Nuku alive. On top of all that, Hali has an explosion named Debbie on her tribe. I think Hali will be spared another vote if Mana goes to tribal again, and she will be greeted with open arms at the merge by more players than anyone else currently in the game when that time comes around.

I originally had Hali going out second on my boot list. Now, the combination of her semi-unknown status and her attorney training are keeping her at the top of the game. I’m going to back Hali as my new winner pick.

Let’s break down this week’s predictions:

Let me know how wrong I am in the comments below, or tweet me your predictions @JacobDerwin! Speculate away!

2 responses to “Next Time On Survivor – Episode 5”