I hope I’m not jinxing the season for saying this, but I’ve thoroughly enjoyed every single episode so far! Last week’s tribal council was one of the most entertainingly hilarious in a while and was a refreshing reminder that not all moves are 100% cold strategy. Natalie napalm was quite a polarising character, but I’m definitely going to miss having her on my screen.

Watching the preview trailers, the thematic concern for this week’s episode seems to be centering strongly on alliances and tenuous social bonds. We’ve been told a couple of times that keeping to original tribe alliances, David versus Goliath, won’t reap success and benefits in the long run of the game. This was stated mostly as appeals from Davids who, as the minority on all three post-swap tribes, naturally feared a Goliath-strong agreement that’ll send them packing. However, the results of the last two tribals saw original members of the Goliath tribe turning on one of their own. I feel that we’ll continue to see more of such fracturing this week.

The post-mortem of Jabeni’s first tribal certainly puts Angelina as a major force of the game. Alongside her plot to get rid of Jeremy two episodes ago, her move to vote with Natalie on paper, while actually conspiring with the rest of Jabeni against her, showed that Angelina’s not holding back her strategic gameplay. Although her ideal plan bathetically failed this time round, she latently established her tactical abilities to the rest of her tribemates.

Mike, who witnessed both counts of Angelina in action, shares with Lyrsa and Nick in the preview, “as far as the game goes, she will cut you.” Clearly, not a good sign for Angelina, especially with the Rock Stars alliance between Mike and Nick! If Jabeni goes to tribal, she’d be a set target to eliminate before the merge. Whatever’s the case, I think the Rock Stars are in control, at liberty of choosing between Lyrsa or Angelina to eliminate.

We know that there’s going to be a face-off between Elizabeth and Davie. But we don’t know what’s it about. The confrontation (notably initiated by the former) does look more detrimental for Elizabeth’s game because I feel like Davie is in a better position on the tribe than her. Firstly, he has a hidden immunity idol that up until now, no one else knows about.  Secondly, he has Carl, who has been aligned with him from the vote on David. Elizabeth, on the other hand, blindsided Carl and voted out his, then, closest ally.

Thirdly, and this is very much me speculating, I feel like Davie has a tighter relationship with Alec and Kara than Elizabeth does. I would argue that Alec was swayed more by Davie’s appeals in the Natalia vote, though that’s not to say Elizabeth didn’t play her part. When Kara approached both Davie and Elizabeth post-tribal, those short scenes had Davie looking way more accepting and willing to work with her than Elizabeth’s cautious behaviour.

Additionally, even though there was a scene of Elizabeth and Kara bonding when they first met, I feel like that interaction was more to furnish the build-up to Natalia’s elimination, than establishing the former two’s bond. As such, all this leads me to believe that the Goliaths on Vuku would be on Davie’s side in a Davie vs. Elizabeth scenario, putting the latter at risk if they go to tribal after the clash we see in the preview trailer, and also at risk further on in the game.

Finally some content for Alison! I’m happy we’ll get to see more of her, but I’m also worried that it might mean she’s going home. Ostensibly, it looks like the Brochachos (John, Dan and Christian) are in the majority on Tiva. It has been established over two episodes and also given a nod during the immunity challenge. This puts Gabby and Alison outside their alliance, with Dan commenting that Gabby will be the first one out of Tiva. However, I don’t think the Brochachos are the strongest alliance on Tiva – Christian and Gabby’s nerd alliance still trumps as more impregnable to me. I don’t think Christian will let Gabby be the target of the vote, so it might be a 4-1 vote against Alison.

Alison hinted in the episode preview that she has plans to blindside Dan with his idol. Although her especially low visibility thus far suggests that she’s not a big player in this season’s overall narrative, I feel that she might get her way this episode. (But, I have to admit that I’m letting my feelings direct my prediction here.) The story has been setting up Dan as an overconfident player, openly flaunting a showmance and hiding his idol in his jacket in broad daylight. 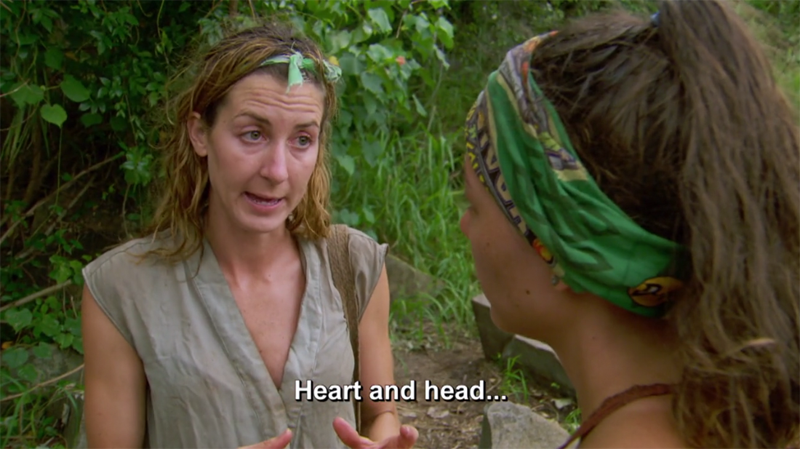 Last episode, we got a shot of an undetected Christian far in the background and a quick zoom out to reveal him voyeuristically spotting Dan searching for the new idol on Tiva beach. From a spectatorial point of view, we identify with Christian as we also get a pleasure of knowing information that Dan, the main subject of the sequence, does not, this perhaps hints of a slight undermining of Dan’s efforts of finding the Tiva idol. There was no follow up to the sequence, so I’m pretty sure the information will surface next episode.

Cumulatively, the knowledge of Dan’s second idol hunt and his first idol might be enough to get Christian on board with Alison’s proposed blindside. There’s also the argument of getting out strong immunity challenge threats before the merge, and Dan certainly fits the bill of a prototypical physical threat. I don’t think Christian will go forward with the blindside if John doesn’t, so I feel it really depends on the dynamics of the Brochachos. Nonetheless, I strongly feel that the narrative has been setting Dan up for a downfall, and as Alison reflected, albeit in a different context, it’s only a matter of when.

Because of the prominence of Tiva in the preview trailer, as well as in the previous two episodes, even though they weren’t on the chopping block, my guess would be that Tiva goes to tribal council this week. I think that John and Christian are in the best positions across all players so far, and at high risks on the other end of the spectrum are Angelina and Elizabeth.

What are your predictions for Episode 6? Feel free to share them in the comments below!

Stephanie is an English literature and film graduate from Singapore who spends too much time analyzing her favorite TV shows. Besides patiently waiting for an Asian version of Survivor she can take part in, Stephanie enjoys dabbling with music, sound production, and writing, and would travel across the country for good ayam buah keluak.

2 responses to “Next Time On Survivor – Episode 6”