2. Three votes will go to Tai. Two will go to Jason as backup in case Tai plays the idol. Tai will use his extra vote and his regular vote to also vote for Jason, making it a 3-4 vote where Jason is voted out.

Grade: I got this a little bit backward. Rather than a 3-4, we ended up with a 4-2-1 vote where the Tai votes were inconsequential. Bonds have been breaking and reforming like wildfire this season! I’ll give myself an A- for determining the correct boot, but getting the scenario wrong.

3. A final three deal with Tai, Aubry, and Joe becomes more significant, whether it comes true or not.

Grade: I was expecting one thing and got something else entirely. Tai is one heck of a character. F. 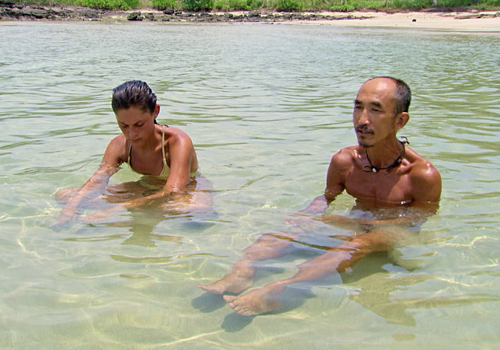 Last week’s episode came to a climax when everyone on the tribe threw Tai under the bus at Tribal Council. Cydney accused him of being a dictator, Aubry questioned him when he said that he didn’t have time to talk with Cydney, and Michele went off on him for even wanting to have private conversations when she was under the assumption that their alliance was voting together against Jason. When Tai defended himself (somewhat poorly) by talking about the smaller group inside of the big group, Michele responded firmly:

“So what Tai is trying to say is there’s a pecking order and I’m on the bottom so now I can’t be included because there’s a smaller group and he thinks he’s sitting so pretty to dictate because he has two idols.”

Of course, Tai’s advantage was not another idol, but it was a solid calling-out of Tai who has become more and more negatively portrayed throughout the season. By the end of Tribal, it is fair to assume that Michele is fed up with Tai, and the first moment of the end-of-episode teaser validates that when we are shown Michele yelling at Tai in the shelter after Tribal.

But then the preview tells us that Michele and Tai are going to start working together. It appears that Tai makes the plea to Michele about using his idol to take out whoever they want so they can move into the final four with ease. Tai is going to have to play the idol anyways since this week’s Tribal will be the last one he is allowed to use it at, but everyone knows that, so no one is going to vote for Tai and give him that power to decide who joins the jury.

Perhaps his idea is to give the idol to Michele so when everyone votes for her instead, they can redirect the votes at Cydney or Aubry who were both in discussion with Tai about taking out Michele at one point or another. Of course, this would leave Tai wide open if he doesn’t have the immunity necklace, so Michele could just turn around and vote for him with the rest of the tribe instead. Tai will likely hold onto the idol and use it at Tribal for either Michele or himself depending on how everyone else acts at Tribal.

Goodness, this one clip has me confused.

If Tai and Michele do end up working together and Tai is out to get revenge on Aubry for “[pulling] a fast one” on him, Aubry will know. We even see her speak suspiciously of Tai in the same trailer: “If he feels he’s been betrayed, he might just completely go another way.” She, Joe and Cydney will basically have to take a 50/50 bet and hope for the best if this is the scenario. But really, odds are, Tai will play the idol for himself.

But what if none of this matters?

The description for this week’s episode reads as follows:

“One castaway struggles to overcome feeling betrayed by their strongest ally. Also, an indulging reward might wreak havoc on one castaway,”

It is likely that the first line of this refers to Aubry having “betrayed” Tai, but the second line is a lot more devious and concerning.

Unlike in previous commercial spots, there is no clear indication of who might be in trouble like when Caleb was evacuated. Even Neal, who I did not predict, had a precise moment in an episode where he talked about his infected knee. With the exception of Tai’s cut up thighs and Cydney’s terrifying dehydration scene during the pre-merge, I do not believe any of the remaining players have had any air time focused on the state of their health.

The point is, with no absolute truth apparent in any of the preview material, there might not even be a medevac. Whatever illness is being referred to in the episode description apparently takes place after the reward. If you have been reading the blog for a while, you know that I don’t spoil medevacs even if I can figure them out. In this case, I have no clue if there will even be one. Probst’s narration over the vague commercial spot is a little ominous, but as hazy as usual. “It just happened again” could reference anything from a medical evacuation to a blindside to an immunity challenge win.

So, in short: chill out, Survivor community.

Also, for your consideration, my favorite shot from the barrage thrown at us in this week’s preview: 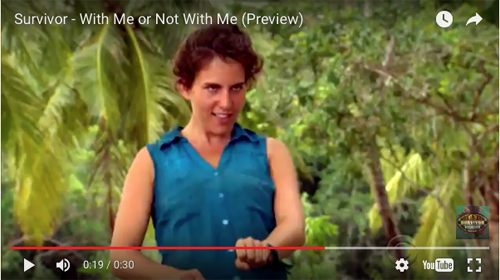