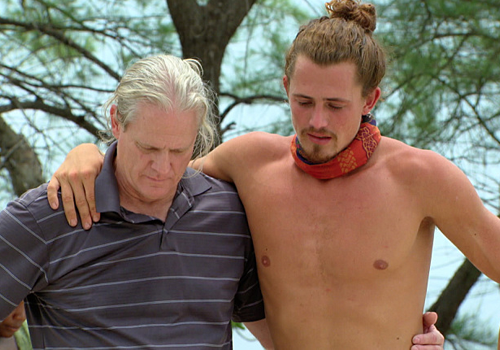 Not bad, Jacob. Not bad.

1. Joe wins time with his dad at the reward challenge, be it by actually winning or by proxy when someone, I feel like it could be Spencer, chooses him and his dad to join him or her on the reward.

Verdict: I’ll give myself a B here! Joe got time with his dad, just by way of a sympathetic Kelley.

2. Tasha will win the immunity challenge. Nothing to back this up, I just think she’s due to win a challenge.

Verdict: Oops. And I had two chances to get this right! F.

3. Joe will target Jeremy but Jeremy can pull an idol and will eliminate Joe. If I am completely wrong about all this, I’m going to make Abi my backup elimination candidate since all she did the last episode was frustrated people.

Verdict: I greatly overestimated Joe’s social standing, but the result and the alternative result was as predicted. Joe was eliminated, and Abi was at risk. I’ll give myself an A-.

Probst’s first bit of narration during the teaser for the next episode was as follows:

“After a huge blindside, Jeremy and Spencer are worried.”

I’m forced to ask: what blindside? Joe went home in a 6-1-1 vote with Keith’s rogue vote for Tasha and Joe’s shot at Abi. Joe definitely tried to maneuver his way around before and during tribal council, trying to convince his tribemates to take out Abi, but he knew he very clearly knew he was in trouble. In his exit interview with Rob Cesternino, Joe explained that he felt “fifty-fifty” on whether he was staying or going at tribal council, but he certainly felt like he was going home.

I know the #blindside is one of the staples of the game, but I think it’s a misused term in this context. That said; Jeremy and Spencer have reason to be worried. 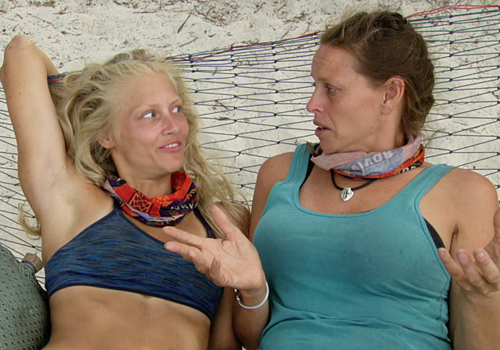 It didn’t play out in the episode, but Kimmi’s sudden strategic push for a Padilla-esque all-girl alliance between Kelley, Tasha, Abi and herself, definitely peaked the interest of at least Kelley and Abi. Tasha went right back to Jeremy and Spencer and informed them of the news. With Joe gone, strictly looking at numbers, it is very possible for the girls to take out the guys.

That said, when you look at the dynamics of who is left in the game, the idea becomes a lot less fathomable. Tasha has already shown disinterest in the plan, and if they inform Keith of what was being conceived, I’m sure he would join forces with Jeremy, Tasha, and Spencer to take out Kelley or Abi and try to reel back in Kimmi.

And then there are idols to worry about.

The Final 7 often brings about relatively solid final three endgame plans, but I’m less certain about this one. I see a close partnership between several different players, most notably Jeremy & Spencer and Kelley & Abi, but I can also see even those close partners turning on each other in fear of their popularity on the jury or fear of betrayal.

It would be interesting, and understandable, if Jeremy and Kelley both played their idols on the same night. I think both know they need to eliminate the other, as each is a type of central player in their respective alliances. To make sure their plan progresses, one has to take out the other. If Jeremy catches wind of the girls targeting him, he will play his idol, and Kelley might play hers in response, as Jeremy would have reason to throw the vote right back at her. I have no idea how this would play out or if some stray vote would land on Abi or Keith or Spencer.

This week may give us a roadmap to the final tribal council, but I don’t think it will. We will get some final three plans, but I would resist calling them definite. 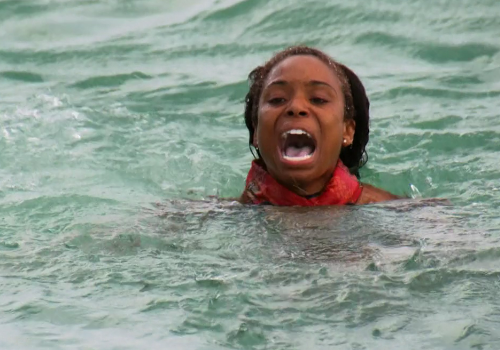 For the love of god, man.

For the second week in a row, the preview material’s main focus is on castaways getting hurt in challenges. At least, this time, there’s no overdramatic suspense about who is in danger.

In the commercial preview, Spencer is shown in a confessional talking about how he needs to keep it together for the final stretch of the game, as a clip plays where he nearly knocks himself out on a floating wooden platform. Then the shift focuses to Tasha struggling in the water as she calls out for help.

The “next time on Survivor” teaser builds on this, adding in several other slips and falls from various castaways.

As I have said in the past, there’s nothing fun about injuries, and I hope everyone comes out of that challenge all right.

I can’t say I’m feeling 100-percent about these predictions, but we’ll see what happens! Above all, I think this season is going to go out with a bang.

1. Kelley or Spencer will win immunity.

2. The all-girl alliance, though mathematically possible, will be unsuccessful. The girls will not all vote together.

3. At least one hidden immunity idol will be played at tribal council.

4. Abi or Kimmi will be eliminated, as Kelley will have some sort of protection. I believe Jeremy, Spencer, Tasha, and Keith will vote together.

7 responses to “Next Time On… Survivor: Cambodia – Episode 13”