The legend goes that Richard Hatch invented the first Survivor alliance and that without Richard’s involvement in the first season, then alliances would never have happened. But is this a fact, or is it a Survivor myth?

In this three-part feature, we will take a look at the birth of the Survivor alliance and the players and parts involved. In part one we looked at the man himself, Richard Hatch, and how his background helped form his strategy going into Survivor’s first ever season. In part two we covered the other early alliances in Survivor: Borneo and how the women were the first to discuss voting bloc strategy. In this final part, we look at why those women alliances didn’t work and how Richard perfected the strategy. 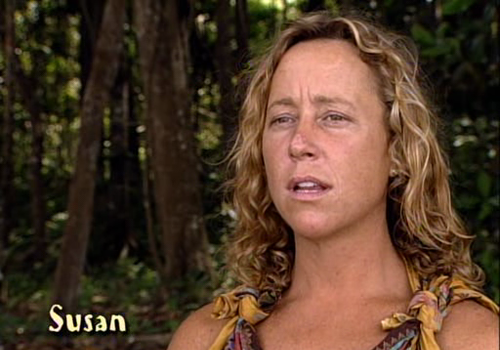 As daylight disappeared on Day 3 of Survivor: Borneo, the Tagi tribe attended the dreaded first ever Tribal Council. Nobody quite knew what to expect – contestants and crew members alike – as this was all new. Even though Sonja was physically the weakest, the four women (Kelly, Stacey, Susan, and Sonja) had formed a pact to eliminate Rudy; the tribe’s eldest male who they viewed as an unsociable curmudgeon. Perhaps one of the most interesting things about this first vote-off is that the original target, before Sonja and Rudy, was meant to be the so-called alliance mastermind himself, Richard Hatch.

You see, for all of his management training and various qualifications, Richard was kind of annoying. He rubbed his tribe members the wrong way. In those first two days on the island, Richard was by far the biggest target due to his condescending attitude. When the women were deciding which guy to target first, it came down to a choice between Richard and Rudy, and initially, Richard was target number one. Mark Burnett explained this in his Borneo companion book, and he also detailed just why the decision was made to spare Richard.

It was the night of Day 2 after the Tagi tribe had lost the Immunity Challenge, and while the group licked their wounds back at camp, Richard and Kelly had a heart-to-heart on the beach. Richard came out to Kelly. He admitted that his cover story was indeed just that – a cover-up. He wasn’t married; he was in fact gay. This moment of heartfelt honesty allowed Kelly to see Richard in a different light, and from that point onward a real bond began to develop between the two. The following day Richard came out to the rest of the tribe. As Mark Burnett himself stated in his book, “Richard’s admission made him more likable – part of the family…,” and it went a long way in helping him survive that first vote-off.

With Richard fixing his image, the choice came down to Rudy or Sonja. If all went to plan, then Rudy would have gone home, and the four women would have taken the numbers advantage on the Tagi tribe. But as Jeff Probst read the votes aloud to the anxious castaways, it became apparent that somebody had turned their back on the alliance. The votes came in 4-3-1. Four votes for Sonja, three votes for Rudy, and one lone vote for Stacey. What had gone wrong?

“The chicks think I’m voting for one person, and I’m not.” – Susan Hawk, Survivor: Borneo, Episode 1.

Susan herself blatantly admitted that she was voting opposite to how Kelly, Sonja, and Stacey were voting. Her confessional suggests that she lied to or at least misled the other women so that they would believe she was voting with them. But just because somebody betrays an alliance doesn’t mean it wasn’t an alliance. We’ve seen countless alliances over the years where someone agrees to a decision only to turn around and stab their allies in the back, but we still consider them alliances; hence the phrase “they turned on the alliance.” Kelly, Sonja, and Stacey all voted together, a strong indication that a voting bloc alliance was in play. Susan, however, decided to go rogue and vote out Sonja whom she considered the tribe’s weakest link.

Kelly and Stacey would continue to vote together the next time the Tagi tribe attended Tribal Council, and once again they believed Susan was voting with them, and again Susan voted against them. The argument over the years has been that the alliance/bond between Kelly and Richard, or Kelly and Susan, was strong from very early on in the game. But that is simply not true. From what we see on screen, and from what we know about the events off-screen, it appears that Kelly was most loyal to Stacey. Kelly and Stacey had a vision for women to run the game, but Susan had other plans, and therefore the original Survivor alliance crumbled.

By taking his time and observing his fellow tribemates, it allowed Richard to plot and plan behind the scenes. When it was time to make a move, he knew exactly who to approach to form his alliance. The Tagi 4 was so successful because of the trial and error of the alliances that came before it, and because of Richard’s ability to control the pieces within it. Richard had formed a solid bond with Rudy, and despite voting on opposite sides early on, Kelly and Sue developed a close friendship. Richard brought these partnerships together, and the four of them systematically voted out the competition up until the merge.

Kelly later started to have second thoughts about the way she was playing the game and turned her back on the alliance. But it was too late; nobody else had the skill or effort to mount a counter attack. Richard had plotted out the game step-by-step and was able to work around every obstacle that came his way.

Richard deserves all the credit in the world for the success of the Tagi 4, but he doesn’t deserve credit for inventing the concept of alliances. If Richard Hatch never stepped foot in Palau Tiga, I have no doubt that alliances would still have emerged, and possibly more alliance betrayals, creating a much more fluid and exciting strategic game.

3 responses to “Did Richard Hatch invent the Survivor alliance? (Part 3)”