Contributor Colin takes a look at the various elements that go into designing a season of Survivor.

After nearly thirty-three seasons on the air, Survivor has developed a base format that has, despite the twists and turns, prevailed over and over again. But, in addition to organizing the on-camera production, Survivor Entertainment Group (SEG) has also perfected the many lesser-recognized elements of the entertainment operation: most notably each season’s theming, design, and logistics.

In a new multi-part series, we will dive into the creative process behind each of these categories, and investigate why the U.S. Survivor has attained some of the best reality TV production value around (especially compared with other international Survivor installments). This first article will cover the graphic and cultural design of the program, and what methods are employed to enhance each season’s visual appeal.

One of the most important and recognizable illustrations for each season is its unique logo, which serves as a sort of ID tag to distinguish each production from the last. Starting with the original logo, it clearly reflects the graphic design of the time. 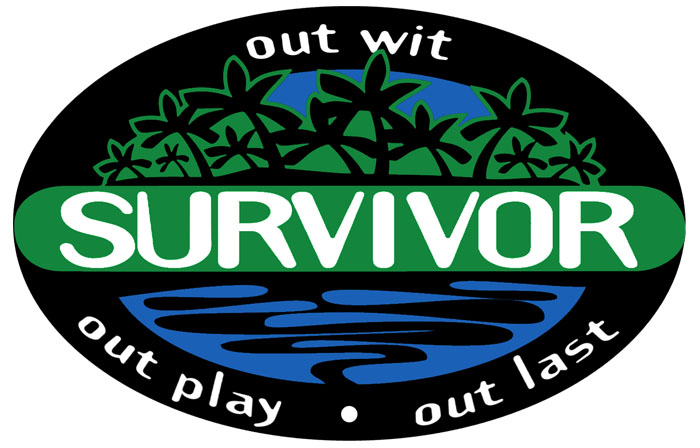 By today’s standards, many would describe it as overly minimalistic, mostly due to the rather generic design elements. Moreover, the inclusion of palm trees and a water flow is attributable to the uncertainty that surrounded the first season’s success. Its universal nature, however, has established it as the most recognized logo in the show, primarily as a result of its use on generic props (i.e. Jeff’s hats). From a different perspective, a time barrier might have also influenced the construction of the first season’s art direction. The original version was completed by Bruce Hollister’s team shortly before the small production crew arrived on location in Pulau Tiga back in February of 2000. 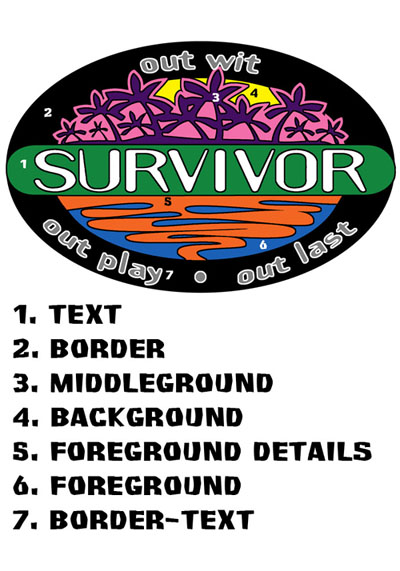 But, during post-production the logo was slightly changed for unknown reasons, spawning the design that we know and love today.

The model remained constant for a good nine seasons, that is, before the logos became a bit more complex and sophisticated. In one of Survivor’s more beloved seasons, the art direction traveled to a new level of detail. 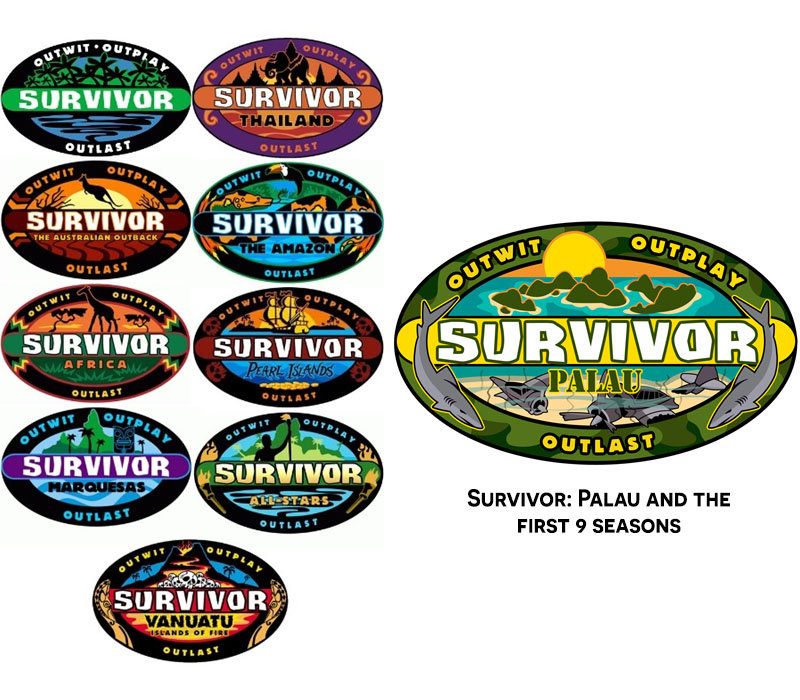 Survivor: Palau’s graphics are some of the unique in Survivor’s thirty-two season history. Unlike the logos of the previous nine seasons, Palau added depth and dimension and an unprecedented level of detail. For this reason, it has some of the most popular and creative Buff designs around. 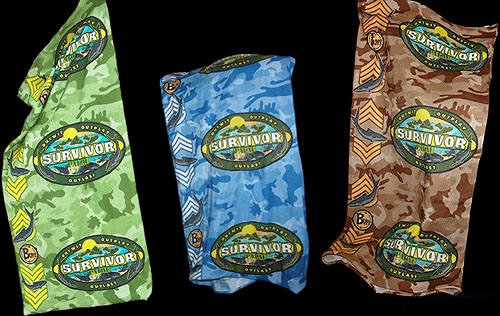 During this time, every season’s theme was fairly obvious—from Pearl Islands‘ pirate theme to Guatemala’s Mayan theme to China’s cultural theme. But, Survivor started to enter into repetitive territory after season 18 onwards. Some fans (mostly collectors) were exhausted by the ambiguous and unoriginal themes that defined Survivor’s dark ages (I’m talking to you, South Pacific!). It’s not that surprising, though, as these same seasons are regarded as being bad all around—with their lackluster gameplay and casting. With this, we’ll take a look at what the art department’s intentions were for these seasons by analyzing the fonts used — there must be meaning, right?

As you can see, many of these seasons didn’t have a clearly defined, unique theme like seasons of past. Many of the themes were repeated, like the numerous iterations of Philippines culture, and the redos of Polynesia and Mesoamerica. The reason for this is mainly due to the repeated locations. After Season 18, Survivor started filming in the same location for back-to-back seasons, primarily for budgetary reasons. Locations such as Samoa, Nicaragua and Philippines were used several times throughout this period. Out of the past twelve seasons, four were filmed in Nicaragua, four in the Philippines (in a row!), and two in Samoa.

The art department had a very limited palette to work with due to the repeated locations. It reached a point where, for the fourth consecutive season in the Philippines, in Survivor: Cagayan, the art department decided to forgo the Philippines look and instead adopted Balinese culture, building the sets and props as if they were filming in Indonesia.

But what happens after the subject matter is determined?

The Evolution of a Logo 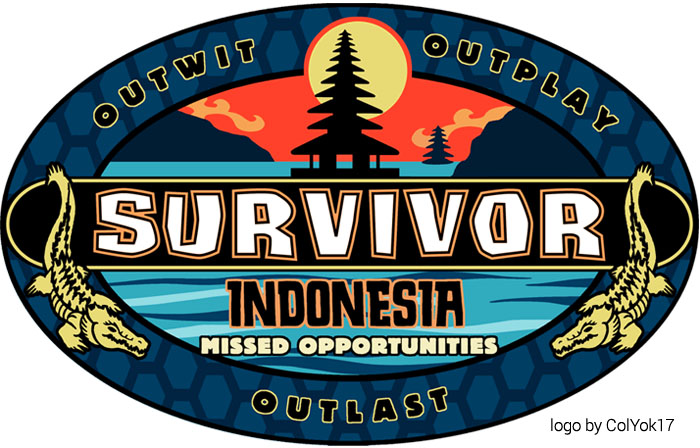 After preliminary theming is complete, graphic designers begin searching for items to include in the season logo. A fan logo will be utilized to showcase the progression of the model (I don’t own, or possess, the layered documents for official logos). 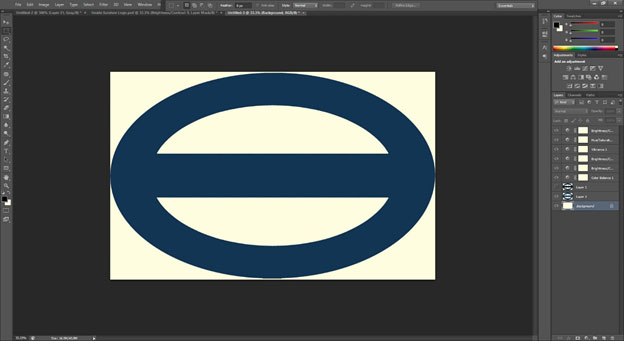 First, the base logo color is chosen (Although, the color might change 5-6 times before they decide upon a final color). 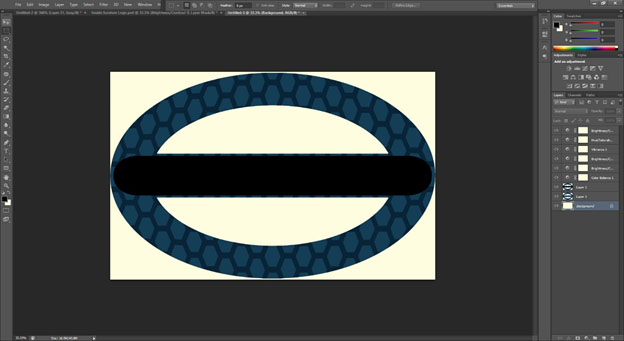 Next, depending on the season or theme, the directors might overlay a pattern to add more detail to the frame. Examples of seasons with patterned frames include the Palau mentioned above, Samoa, Cagayan, and Cambodia. 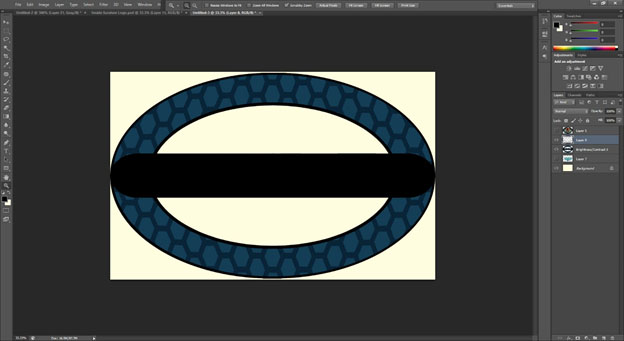 As with any Survivor logo, another frame surrounds the large frame to separate it from the interior and exterior contents. 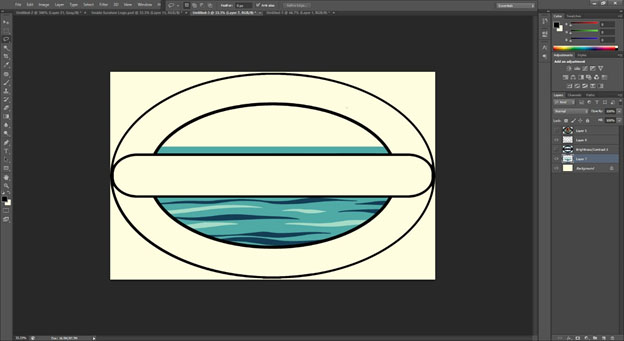 This next part depends on the motif and location of the season. Because this hypothetical series will film in Raja Ampat, Indonesia, the ocean is necessary to the design. This “water” pattern is very similar in style to both Philippines and Kaôh Rōng, but it is a custom design. Photos of real water were utilized to draw it. 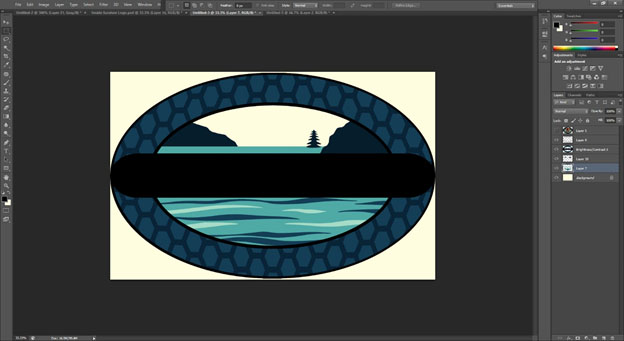 Islands are added on both sides, and a mini temple is situated on the horizon, this is to add some level of detail to the logo. 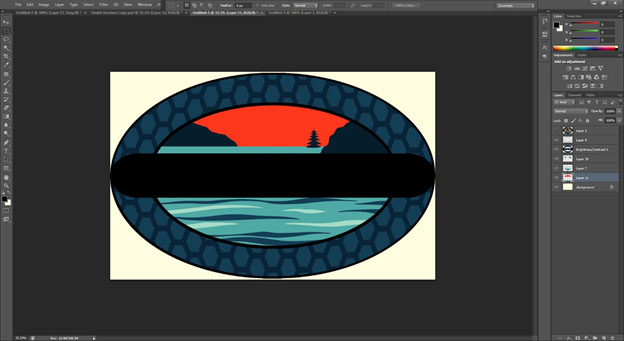 Below the other layers, it is easy to insert the sky. To create maximum contrast between all of the structures, we tamper with tools such as “Brightness/Contrast” and “Color Balance”. 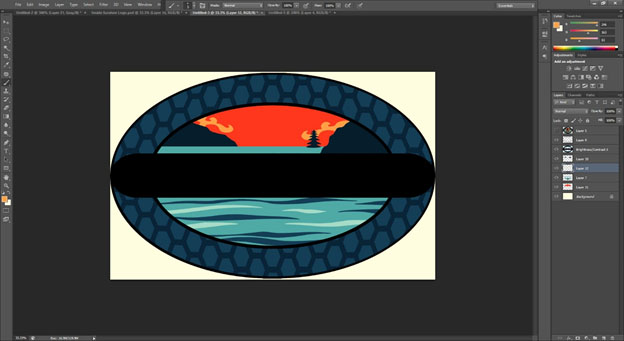 While early seasons might have been mostly solid colored and straightforward, modern logos usually feature more design elements. So, for this logo, clouds cover the sky. One of the most complexly designed and detail orientated logos is Survivor: China, which forgoes a traditional frame and instead uses an image of the Great Wall of China as its perimeter – also note the Chinese symbols used in place of the usual “Outwit, Outplay, Outlast.” 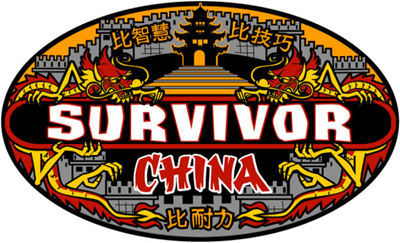 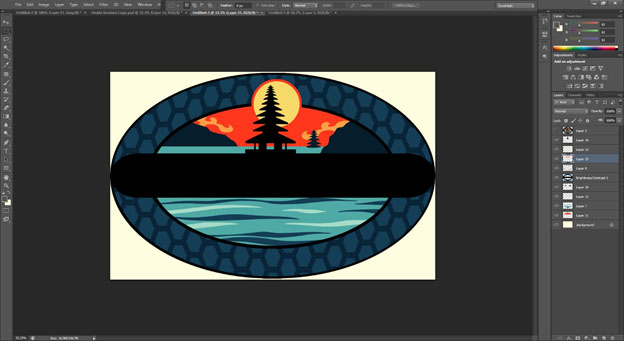 The logo is taking shape, but it is still missing the central focus, which defines every Survivor logo. To accomplish this, we place an offset sun and Balinese temple towards the center of the frame. Previous examples include the Australian Outback’s kangaroo, Thailand’s elephant, the Pearl Islands pirate ship and Vanuatu’s volcano. 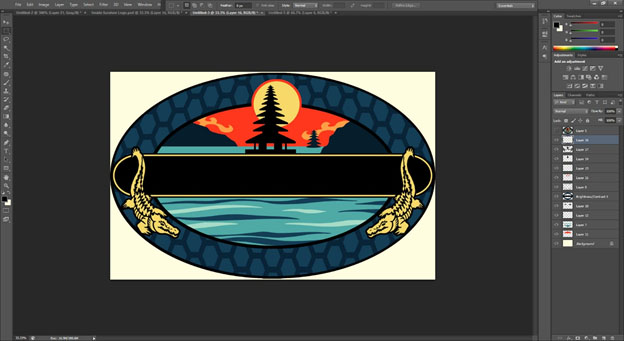 Because it would look barren without it, two saltwater crocodile stencils are added to the sides. Their color matches the sun in order to simplify the number of colors used, thus creating a specific color profile (which will then be used in determining tribe colors, wardrobe, etc.). Side stencils have been used in several season logos, including Palau’s sharks, Gabon’s snakes and most recently Kaôh Rōng‘s tigers. 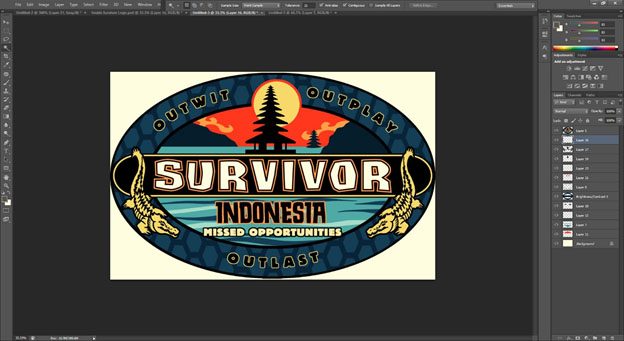 Lastly, text layers are added. Block T, the font included in many early season logos and last year’s Cambodia, is used for the subtitle. To find the primary font, designers will often frequent dafont.com and MyFonts for premium fonts. And, depending on the season, certain characters might be modified for use on Buffs and flags.

“What happens next?” you might ask. Usually, tribe colors are determined, and producers look for the best tribe names possible. Sometimes the names correlate to the theme of Survivor – “Outwit, Outplay, Outlast.” For instance, the tribe names in Philippines – Matsing, Tandang, and Kalabaw – mean monkey, rooster, and water buffalo in Tagalog (the language of the Philippines). Each one symbolizes a part of the Survivor motto (monkey for outwit, rooster for outplay, and buffalo for outlast – respectively). 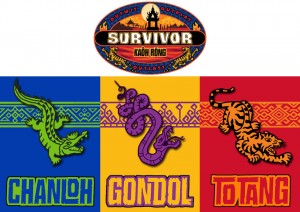 A similar design element was used this past season in Kaôh Rōng, with each tribe having an animal insignia on their buffs and tribe flags. The crocodile for Brains, the snake for Beauty, and the tiger for Brawn.

On the computer, ethnic patterns are designated for each tribe, and vector-based software is used to design the tribe flags. At the same time, Buff designs are sent to the Buff® Headwear company for printing. Over the last five years, many Buffs have had similar designs (see above); this is attributable to the template used every season, where colors, patterns, and logos are the only changes.

In the next feature, we will examine the subsequent steps in the Survivor production, when these designs take physical form.

Colin Thomas is a college student from St. Paul, Minnesota, majoring in biochemistry and minoring in communications. Prior to Inside Survivor, he had a personal Survivor blog and podcast at survivordigest.com. He now focuses on his graphic design hobby, creating banners for Jonny Fairplay's Survival of the Fairest podcast. Colin has been a mega fan of Survivor since season 19 and dreams of one day setting foot on the beach himself.