The best premiere in the history of the show, Survivor: Pearl Islands starts out with a thrilling opening on the high seas. Wanting to catch this group truly off guard, Jeff Probst opens the season by surprising the castaways that the game would start at that very moment, days before they were anticipating it to begin, and would be thrust into the game with only the clothes on their backs. After dividing into two tribes, the castaways are forced to jump off a boat and swim ashore to a local Panamanian fishing village to start off their adventure, having to trade for goods they’re going to need on their journey ahead.

This premiere stands out from all the rest in large part to this opening sequence; never before or since have we seen a group of castaways haggle for supplies with local civilians, and it yields great results. Sandra Diaz-Twine is the MVP of the Drake tribe, using her Spanish speaking skills to swindle a boatload of treasure, saving Trish Dunn from a questionable amorous shopkeeper in the process. The Morgan tribe is a lot more hapless, with Osten Taylor absent-mindedly leading the group’s bartering efforts by unwisely trading what little clothes they had, and leaving their shoes unattended, thus allowing a Survivor legend to be born.

While the rest of his tribe beg and barter with the villagers, Rupert Boneham is off stealing the shoes of the Morgan tribe, and instantly captures the hearts of Survivor fans everywhere. While many fans today feel Rupert’s character feels tired and worn out, there’s no denying that his presence lights up the screen in Pearl Islands. Just his look alone is both stand-out and serendipitous: the big, tie-dye wearing, black-bearded guy with the deep, growly voice is perfectly cast for the pirate-themed season, and he instantly runs with the theme by stealing the shoes, thus making for a truly iconic moment.

The action continues when the castaways hit the beach, allowing the cast to shine as one of the greats of any Survivor season. Rupert still gets a lot of airtime, becoming the provider he always wanted to become, but a lot of other great characters begin to emerge, like Jonny Fairplay. Determined to become the greatest villain Survivor had ever seen, Fairplay spends this first episode not being too devious. He does, however, immediately start working his Fairplay charm with his tribe, spending the first-night telling debaucherous stories of his past and foreshadowing the troublemaker he will become.

Side-Note: Let it not be forgotten that Fairplay actually says something nice about Sandra in this episode, paying her a compliment in a confessional about how helpful her Spanish was in securing all of their supplies. Sandra doesn’t take too kindly to Jon right away, but at least she isn’t screaming “what the f***!” in his face. Yet.

There’s also Andrew Savage on the Morgan tribe, quickly establishing himself as the group’s leader with an undying devotion and desire to see his tribe succeed. While Savage’s character will take a more devious turn in Survivor: Cambodia, in this season he’s all heart and determination. That commitment and devotion are put to the test early on, as the Morgans begin a six challenge losing streak with their first loss in this episode, and it was a close one.

A race through the jungle while transporting a large rustic cannon, the Morgans keep pace with the Drakes throughout the challenge, despite a sartorial mishap. Osten had already experienced trouble with keeping his boxer briefs at waist level and unfortunately experienced similar problems during the challenge. In a show of solidarity, Savage and Ryan Opray dropped trou’ as well, so when they lost the challenge, they lost both immunity and a little bit of their dignity. 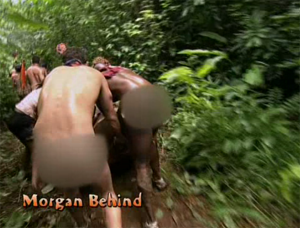 So the Morgan tribe heads to tribal council later that night, but the vote ends up being one of the most low-key parts of the episode. Eventual bootee, Nicole Delma, does cause a bit of ruckus, attempting to play multiple people against each other and gets caught in the process, making her an easy first boot. Despite the relatively standard nature of this first vote, all of the action beforehand more than makes up for that, as this episode kicks off Survivor: Peal Islands as one of the most thrilling and memorable seasons in Survivor history.