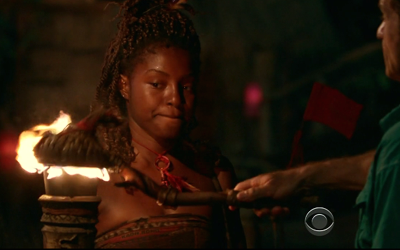 From her keen sense of observation, easy-going personality and hilarious soundbites, Cydney Gillon was a supremely fun person to watch play Survivor. Encompassing the brains, brawn, and beauty that bore her season’s namesake, Cydney was able to use her chipper and laid-back demeanor to form strong relationships with almost everybody in the game and seemed well set-up to make it to the final tribal council. But, thanks to one erratic player, she found herself in a tie situation at the Final 4 which she could not fight her way out of and left the game on Day 37. Cydney gets a pass despite not actually being eliminated on Day 38 since she was still the last member of the jury.

Cydney’s game began on the Brawn tribe, where she quickly realized she needed to cozy up to the two muscleheads who were calling the shots, Kyle Jason and Scot Pollard. Just by keeping a low profile and cheesin’ whenever possible, she got to the merge pretty easily, by which time she was finally able to make some moves of her own. At the first vote after the merge, she noticed that Scot and Jason were getting chummy with former Beauty Nick Maiorano, which caused her to be like “brrr” and shake things up. She turned to two of her newest allies separately, Aubry Bracco and Michele Fitzgerald, who each had connections of their own, to amass enough votes to send Nick out of the game and planting Cydney firmly in the majority.

From that point forward, Cydney’s role in the overall narrative arc of the season diminished a bit, but it was still obvious to see what great of a game she was playing. The only people mad at her were Scot and Jason; everybody else viewed her as a trusted ally. She was in such a good position that she soon became a crucial swing when Jason was on his last legs, working to convince her and Michele to come over to his side, but Cydney stood her ground, wanting to remain loyal to her new allies.

Fast forward to the Final 4 and Cydney was in a great spot. She was much closer with both Aubry and Michele individually than those two were with each other, and knew that the two of them would target each other before they targeted her, and that’s exactly what happened. Michele won immunity, which meant Aubry was pretty much toast. But Aubry had something playing in her favor that nobody else had, and his name was Tai Trang. Tai had been an erratic player for the majority of the game and had followed Aubry’s lead the last couple of rounds. Those two factors led to Tai forcing a tie at the next tribal council, making Cydney compete in a fire-making tiebreaker challenge against Aubry.

Unfortunately for Cydney, she needed more heat than she could muster, as she lost the fire-making challenge and had her torch snuffed. While she didn’t get to Day 39, Cydney still played a really strong game without relying on a lot of big moves. Instead, she just relied on her cheerful, observant, hysterical personality to get far in the game while leaving a lasting impression on Survivor: Kaoh Rong. 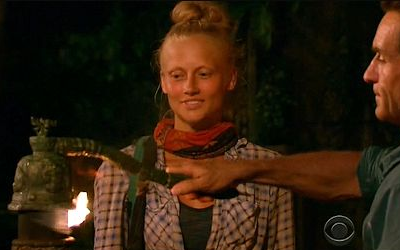 Not only was Kelley Wentworth an underdog to get to Day 38, but she was also an underdog to get onto this season in the first place. As one of the 32 names on the ballot to decide the cast of Survivor: Cambodia, Kelley seemed like a longshot to land a spot, considering she was just a pre-merge boot her first season. Through some aggressive campaigning, however, Kelley made the cut, making the trek to Cambodia ready to take advantage of her second chance. Throughout her 38 days, Kelley showed that she did indeed have the chops to play the game, and while she didn’t play perfectly, she more than made up for that in the sheer grit and determination she showed, living up to the underdog moniker that seemed to fit her so naturally.

Kelley, much like her fellow second chance competitors, hit the ground running as soon as she hit the beach, forming bonds left and right with anybody she could talk to, but she also engaged in some sneaky (sneaky) activities of her own. During the first three days, she discovered a clue to the hidden immunity idol, a clue that would force her to retrieve the first idol ever hidden within a challenge. Watching Kelley gauge the right moment to snag the idol, while in the midst of her entire tribe, was an exciting Survivor first to watch, and one that bore fruit for Kelley.

Having that idol, and not telling a soul about it, proved to be extremely valuable for Kelley later on. Although she had managed to avoid tribal council for most of the pre-merge, she was still in a tight spot come the merge and looked to be a goner come the Final 12 round. But when the majority alliance least expected it, she whipped out her idol and canceled all nine votes that were cast for her, setting a new Survivor record for votes nullified by an idol. That move sent a message to all of the other players that Underdog Wentworth was here to play.

After that small victory, Kelley was able to finagle her way into a couple of “voting blocs” for the next couple of rounds, but she still could never find her way into the majority. No matter how hard she tried, and she tried a lot, she could never find people that wanted to commit to her until the end due to her underdog momentum becoming too dangerous for the other players. It looked like her game would finally flame out at the Final 6, but, thanks to another hidden immunity idol, she managed to save herself yet again, causing the infamous “no votes” tribal council to take place.

After squeaking past that vote, she snagged an immunity victory at the Final 5 and was one challenge away from finishing one of the greatest underdog stories in Survivor history. But, she fell, and was unanimously voted out by the majority alliance. Although she didn’t win, Kelley’s journey this season proved that you could be a pre-merge boot in one season, and then come back and kick butt in another season and that you can always keep trying until your torch goes out. 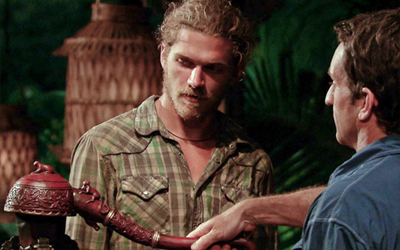 Surfer-bro on the outside, nerdy superfan on the inside, Malcolm Freberg had a swagger that made playing Survivor look just plain cool. Whether it was flashing hidden immunity idols or hatching plans with his bros, Malcolm played with a passion befitting any superfan and showed that dreamy hunks with long hair could actually play Survivor well. Although he looked like a total package player at first, there were a couple of fundamental flaws that prevented Malcolm from reaching the end and landed him a spot in the Day 38 Club.

Malcolm’s story in Survivor: Philippines was one of the greatest “rags to riches” tales in Survivor history. He started off on the infamous Matsing tribe, one of the worst groups ever assembled in Survivor history. Matsing never managed to win a challenge against its two rival tribes and was ultimately whittled down to just Malcolm and his most trusted ally, Denise Stapley. After they had been split up, Malcolm spent the short time away from Denise adapting well to his new tribe, making allies left and right, which would come in handy when reunited with Denise at the merge.

Battle-tested from their time on Matsing, Malcolm and Denise were in a great spot, as the remnants of the two other tribes sought their votes in their war against each other. That cushy spot didn’t last for very long, though, when Malcolm’s threat level outgrew the charm he had been relying on previously. Luckily for him, he had a hidden immunity idol, and at the Final 10 tribal council, he was able to develop a signature move of sorts, perfecting the art of the idol bluff, daring anybody to come at him at the risk of their lives in the game.

Not only did it work, but Malcolm soon found himself in a solid Final 4 alliance with himself, Denise, Lisa Whelchel and Mike Skupin. During the final stretch of the game, he demonstrated what a true threat he was by balancing his charm and strategic skills by winning a couple of key challenges, pushing him all the way into the Final 4. Malcolm seemed set for the Final 3, despite being the biggest threat in the game. But when Denise came looking for some reassurance of going to the end together, Malcolm failed to reciprocate those same feelings. That one misread of the situation turned out to be his most crucial mistake, as Denise felt no more loyalty to Malcolm and sided with Lisa and Mike to send him out of the game on Day 38.

Throughout Survivor: Philippines, Malcolm played the game to its fullest extent, showing that more than just nerdy guys with glasses can call themselves superfans and embrace a love for the game. More than just his mactor-y appearance, Malcolm often acted like a dork himself, making Harry Potter references, and never took himself too seriously. His fun-loving attitude and penchant for shaking up the game have made Malcolm one of the faces of the new generation of Survivor players, setting the bar high for pulling off great Survivor moves with style.

Survivor 41 Player of the Week (Episode 2)