After an amazing episode featuring Tony, the king of llamas, blindsiding Sophie, there are a mere eight players left in the main game of Survivor: Winners At War. Closing in on the endgame, let’s take a look at trailers and other sneak previews of the coming episode.

For this week’s article, I find the episode description quite useful to frame my predictions. It begins with a promising statement that “alliances may crumble after a tribal blindside.” This most definitely refers to Tony and Sarah. The NTOS trailer shows the aftermath of tribal at night, where Tony had just orchestrated an absolute blindside of her closest partner, Sophie, when the plan was to work together to split the votes between Michele and Jeremy. Here, Sarah’s enraged and raises her voice at Tony. “You just sunk my game. I’m done,” she yells. The same scene is continued in the sneak peek showing Sarah ending their conversation with a stern warning.

I feel like one of the narrative threads of the coming episode will include whether the Cops R Us pair can work together again. Still, I’m sure Sarah will reciprocate, seeing how she doesn’t have many alternatives. We don’t see her having much or a relationship with Kim and Denise, or Jeremy, whom she just voted against. For now, let’s put a pin in this point and come back to it later.

Next, the second part of the episode description states that “an undercover operation escalates to new heights.” First, good job CBS with the pun on “new heights,” which almost definitely refers to Tony’s spy nest. In the NTOS trailer, he says, “My spying has evolved. Now I’m up in the air.” I’m 100% on board, and I’ve been hoping for a spy treehouse since our Inside Survivor pre-filming fantasy draft. I think that Tony will use his vote last tribal council to prove his dedication to Jeremy and Michele, deepening his hold of his undercover mission. 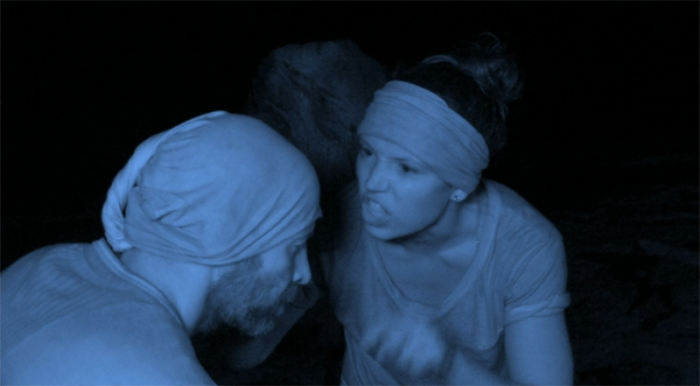 However, though he might have Jeremy swayed, Kim is not having any of his antics. In the last episode, Kim was wary of Tony’s intentions and was rightfully not confident in his word. This week, the NTOS trailer shows Kim telling Michele that it’s time to get Tony. I predict that she’ll attempt to form a semi women’s alliance, pulling Denise, Michele, and Sarah, along with Ben, to have a five-person majority in the tribe. I think Sarah and Michele would be the swing votes in the particular decision. However, as mentioned, I don’t think Sarah trusts Kim enough to move forward with this group.

Instead, I find that Sarah is more likely to stick to the Cops R Us alliance and carry on the game with Tony. This group of Tony, Sarah, Ben, and Nick, already makes half of the remaining eight players, and I think they’ll be able to bring Michele on board. I predict that they’ll target Jeremy since he has been named as the big threat in the game a couple of times now. Ben and Jeremy’s death glare showdown during tribal council last week also hints at the antagonism between them, suggesting they’ll want to get the other out as soon as they can. 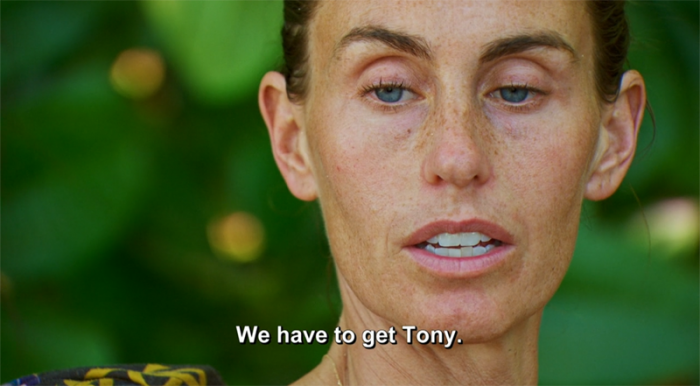 Besides Jeremy, I predict the next player at risk is Denise, especially if Jeremy wins the immunity challenge again. I think Tony’s group would want to split up what I feel is a noticeable Kim and Denise pair that has grown over the post-merge. All in all, I predict that we’ll see a further dent in the already frayed minority group, resulting in Tony, aided by his spy nest, immunity idol, and his double agent strategy, controlling the vote again this episode.

Leave a comment below with your predictions for this week!

2 responses to “Next Time On Survivor – Episode 12”