TONY ON PROBATION — It was The Tony Show again in the latest episode as the Cagayan champ continued to dominate. Again, he acknowledged that he’d broken probation, referencing his wife’s advice to not play so crazy this time around. But as he said himself, he’s got the itch, hence the Spy Nest and other insane antics.

Right now, things are working for Tony, but there is still some concern over whether this return to the Tony of old will end up backfiring. Sarah represented the voice of concern in this episode. Firstly, she was furious with her Cops R Us partner for blindsiding her last week. Secondly, she said that if Tony continues his non-stop crazy playstyle, he could end up getting himself voted out.

This story can only have one of two endings. Either Tony’s probation being broken leads to his downfall. Or he turned on his crazy gameplay at just the right time, and it leads him to victory. At the minute, it’s leaning towards the latter, but there is still a lot of game left to play. 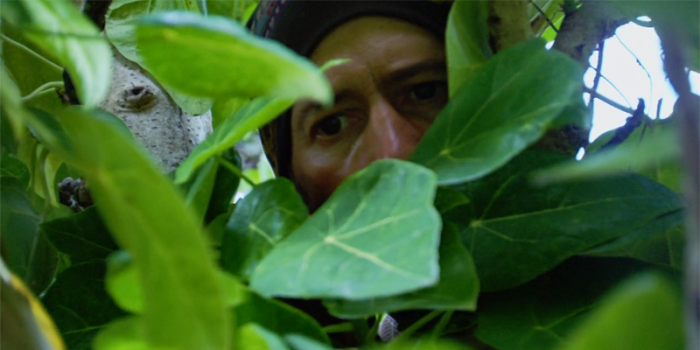 FIRE TOKENS REPRESENT YOUR LIFE — We’re really starting to see the impact of tokens now as we head into the home-stretch. It’s not just tokens being won, though again, we saw that happening with the coconut challenge on the Edge. But it’s how the tokens are being used as bargaining chips, most prominently between Tony and Nick this episode.

GOTTA GET TONY — This one kind of ties into the Tony on probation narrative. Several players this week mentioned how they needed to vote Tony out. It was led by Kim but also backed up by the likes of Denise, Nick, and Michele. Nick even said he needed Tony (plus Jeremy and Sarah) out for a chance to win.

The funny thing is, three of those four dropped from the Immunity Challenge, essentially handing Tony safety. So was this set up to show their mistakes and regrets? Or will we see them continuing to try and get Tony in the remaining hours of the season?

BEN VS. JEREMY — This slowly brewing rivalry really picked up steam in the latest episode. Ben was so annoyed he was blindsided last week that he outright refused to talk to Jeremy. In confessional, Jeremy referred to Ben as a “child.”

Now, they did end up voting together this episode, mostly at the behest of Tony, but I don’t think they patched anything up. In their sitdown chat, Jeremy said he still felt like Ben wasn’t listening. So I fully expect this to remain a story for the remainder of the season. 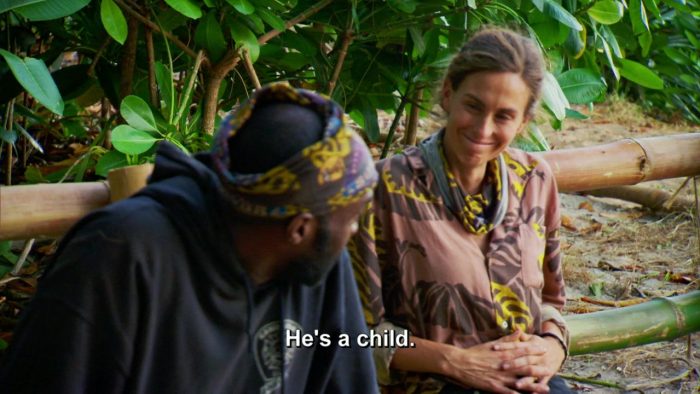 COPS R US — Still the most prominent alliance in the game, Sarah and Tony hit another bump in the road this episode, at least at the start. Sarah was not pleased with Tony’s “grimy move” against Sophie and let him have it in the Tribal Council aftermath. She yelled at Tony, told him that he’d sunk her game, and promised she’d never talk to him again if it ended up getting her voted out.

This didn’t last, however, as a couple of scenes later, Sarah was right there helping Tony in his Spy Nest. She reiterated in confessional that they’re not turning on each other, though she acknowledged that Tony’s antics could end up costing them.

What to make of this? Are we meant to see this as a lapse of judgment on Sarah’s part? Is sticking with Tony going to cost her? Or will they somehow make it all the way to the end, and the bickering is there to add some tension to the relationship? The fact Tony showed a willingness to play his idol for Sarah probably suggests she is right to stick with him. Either way, I would be surprised if this alliance/relationship doesn’t last all the way until the finale episode. 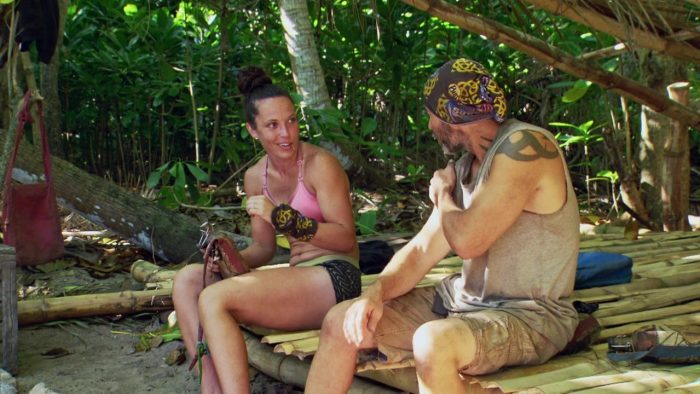 BEN & TONY — This pairing has received a little bit more focus in the past couple of episodes. It’s not a great look for Ben, though. He recognized that he shouldn’t trust Tony, especially after being blindsided by the Sophie vote. And yet here he was, apologizing after getting caught with the idol, blabbing about Kim’s plans, and even voting with Jeremy on Tony’s request.

JEREMY & MICHELE — It took this long for this pairing to be officially acknowledged in confessional. Michele explained that she’s been with Jeremy since Day 1 and that he is like family. However, it seems like this was mostly brought up to explain why Michele gave Jeremy her 50/50 Coin advantage.

DENISE, MICHELE, & NICK — This was a weird one because it sort of came out of nowhere and yet had no relevancy to the episode. During a discussion in the shelter, Michele said she thinks the three of them are on a level playing field, and it would be to their benefit to make a Final 3 alliance. Denise and Nick seemed more than happy to be on board. But when it came to the vote, Nick voted with Tony’s alliance, blindsiding Denise and Michele.

Why show this trio, though, if it has no purpose? That’s what makes me think it could become a more solid alliance in the next episode. Interestingly, these were the three players Sandra labeled explicitly as the lesser threats at the Tribal Council she went home at. 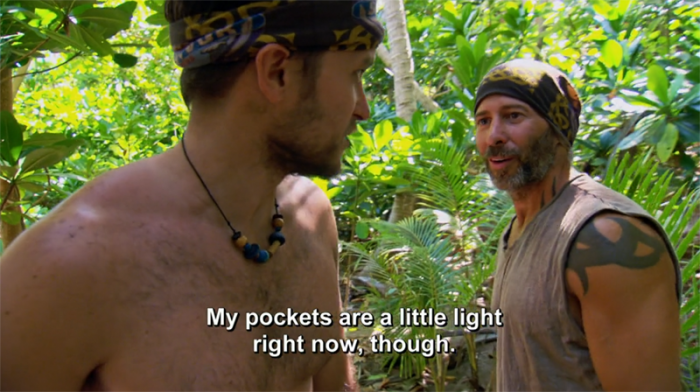 NICK & TONY — This pairing has also had some increased focus in the past couple of weeks. Twice now, we’ve seen Nick and Tony sharing tokens with one another and making deals. But there is distrust here. While initially, Tony told Ben he thought he could trust Nick 100%, he later caught the David vs. Goliath champ in a lie and realized that Nick was likely to join up with the women to make a move against him.

As I said last week, the overriding contenders are pretty much narrowed down to Tony and Sarah, so I’m not going to bother going through all their pros and cons again. It’s all pretty self-explanatory at this point. Tony is receiving game credit, but also doubt over whether his amped-up gameplay will ultimately cost him. Sarah has had a tighter focus on her social game but also undermined in her relationship with Tony at times.

But is this all too obvious? It could just be that nearing the end of the season feeling where I start to second guess myself and talk myself out of the obvious. But, as I said before, in a post-EOE world, there is always a chance of something topsy-turvy happening at the end.

The weird focus on the Denise/Michele/Nick final 3 alliance, which had no relevance in this specific episode, is what is giving me pause for thought. Could that be the actual Final 3? It would tie back into the “lions vs. hyenas” story if the three people Sandra called out as lesser threats made it to the Final Tribal Council. If that is the case, then perhaps there are other contenders remaining.

Michele would probably be the frontrunner of that trio. She had a strong pre-merge edit with a lot of focus on proving herself worthy as a winner. So even if she hasn’t had the best edit post-merge, maybe her early content and Boston Rob’s “if you win, you win,” is enough foreshadowing. Though, her giving away of the 50/50 Coin to Jeremy this week wasn’t a great look. But, that could be one of those situations that had to be shown due to its impact on the game itself.

Then there’s Denise, who also had a decent-ish pre-merge edit, with her crowning moment coming at the Sandra blindside. Like Michele, though, her edit has slipped in the post-merge, often kept to the background as a bit-part player. Plus, both Denise and Michele started on the Sele tribe, and being a strict subscriber to the complex tribe theory gives me doubts about their winner chances.

Nick undoubtedly has the worst edit of the three, though he’s the only one of the three to talk about making it to the finals and who he could beat. Plus, he was on the complex starting tribe. That said, he’s been under the radar for a large portion of the season. And when he is shown, he’s often undermined. Even in this episode, where he talked about needing to take out Tony, Jeremy, and Sarah, he was shown to renege on the plan, first by dropping out of the challenge, then by voting with Tony after fumbling over his words trying to lie. 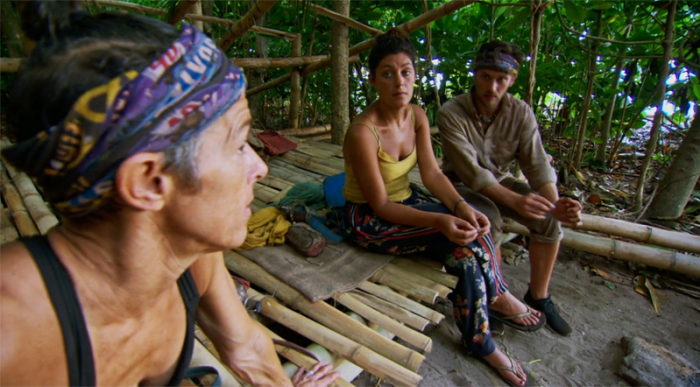 Perhaps there is another reason the Denise/Michele/Nick trio received focus, maybe it has a short-term impact on the next episode. But it definitely jumped out at me as one of those things that seemed intentionally placed in the edit for some reason or another.

And that’s not even to mention the wildcard that is the Edge of Extinction. We should never rule out a Chris Underwood situation. Though I lean towards that not happening. Even though Chris was certainly underedited, he had the whole thing about wanting to play the perfect game. Plus, the players in the game at the end, outside of Devens, who had his own flaws, were drawing dead. That isn’t the case this time around with Tony and Sarah standing as top contenders, with an outside chance of a hyena underdog victory.

All that said, Tony and Sarah still remain the top contenders head and shoulders above the rest, for now.