It looks like Fiji is set to become the permanent home of Survivor, at least if Jeff Probst has anything to do with it. For the past four seasons, the long-running reality-series has filmed in Fiji’s Mamanuca Islands – including the upcoming Survivor: Heroes vs. Healers vs. Hustlers and next year’s Survivor: Ghost Island. The exotic location has proven so successful that the show may just be staying there indefinitely.

“I hope we stay here forever,” Probst told EW‘s Dalton Ross, referring to the Fiji location. It’s not the first time the Emmy Award winning host has shared this sentiment, during a live Facebook Q&A last year, Probst said that Fiji “is the ideal Survivor location” and that “if [he] could go there for the rest of [his] Survivor career, [he] would sign that deal right now.” The reasons Probst is so high on Fiji is because of what it offers not only in terms of filming logistics but in the ease of working with the local government.

“Fiji offers us everything that we want,” the host tells EW. “Incredibly beautiful water that you can see down 30 feet, beaches that are amazing, a government that is working with us, local labor that loves to say ‘Bula!’ every day because they’re just happy you’re here. And our crew has never been as happy. We actually have decent accommodations to do this show out in the jungle. It’s a win-win-win.”

For years Survivor bounced all over the globe, everywhere from the Australian Outback to the Brazilian Highlands to the Plains of Africa, providing each season with its own unique landscape and cultural feel. But in 2009, in an effort to cut down production costs, the show began filming two seasons back-to-back in the same location. Countries such as Samoa, Nicaragua, and the Philippines have been used on multiple occasions, but Fiji’s Mamanuca Islands is the first location to be used for four consecutive installments (they shot four seasons in a row in the Philippines but in completely different areas).

Probst said that the world has changed significantly from when Survivor started 18 years ago. “It’s been two decades. It’s a different world. There are not as many places we can go for lots of reasons — the economy, population, political unrest, weather patterns.” For this reason, as well as the beauty Fiji provides, the host and executive producer believes they’ve found a permanent home for the future of the series. “When you find yourself in a leadership position, what you do realize is, you have to make decisions,” he tells Dalton. “It would be great to say, no we’re going to go all over the world. No, there is nowhere to go. This is our home. I hope we end our show here.”

The latest news seems to confirm Inside Survivor’s earlier speculation about seasons 37 and 38 filming in Fiji. The Mana Island Resort, which houses production crew during filming, is once again booked up from March 2018 onwards.

UPDATE 12/27/17: An article posted by the Fiji Times on November 2 appears to confirm that Survivor will remain in Fiji for the foreseeable future. In the report, Mana Island general manager Patrick Wong states that the resort has been fully booked by television production crew for both 2018 and 2019.

“This buyout is for next year and the following year as well, so it is certainly great for Fiji,” Wong told the publication. “You know the Government of the day is pushing very hard to encourage investors from the film industry into having locations in Fiji and there are great incentives available. It spins the benefits not just in the main tourism belts but to the rural parts of Fiji and the local community too.”

That would mean Survivor is staying in Fiji until at least Season 40, which would film during the summer of 2019.

UPDATE 01/14/18: In a further update, the Mana Island Resort & Spa has now confirmed that they are closed for bookings between March and July for the next three years. The information was posted at OurPacific.co.nz, the notice can be seen below: 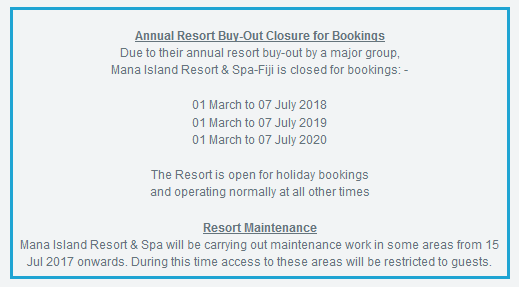 This means Survivor intends to stay in Fiji until at least Season 42, which would film in summer 2020.

What do you think about Survivor staying in Fiji? Let us know in the comments.