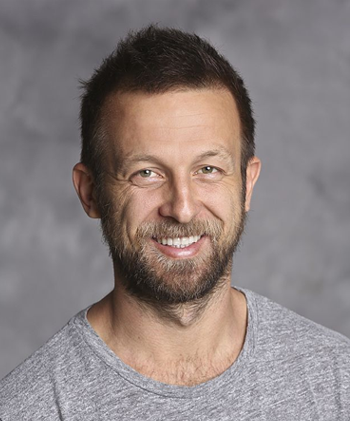 Age: 35
Hometown: Santa Monica, CA
Previous Season: Survivor: Blood vs Water
Previous Placing: 10th
Most Memorable Moment: During the Sumo at Sea challenge against his brother, their rivalry was put to the test. Vytas tried to pull a fast one after falling down and being given a fair chance by Aras to get up and start afresh.

What happened in his previous season: Vytas Baskauskas came into Survivor: Blood vs. Water with his brother, Survivor: Panama winner Aras. Very early on Vytas was established as the bitter older sibling whose life had gone off the beaten track compared to the golden-boy lifestyle of his younger brother. He was placed on the Tadhana tribe along with the other loved ones, where he quickly became involved in an all-male alliance, headed by Brad Culpepper. The tribe lost the first four Immunity challenges in a row.

Tadhana voted out two girls first, but then the boys started to distrust alliance member John due to his connection to Candice and blindsided him the next time they went to Tribal Council. Brad and Ciera were on the chopping block at the next Tribal Council after a 3-3 tie; Vytas switched his vote at the re-vote and sent Brad packing. At the tribe swap, Vytas ended up a lone man on a tribe of women. They wanted to get rid of him first, but his charming (some might say smarmy) personality saved him – Kat and Laura B, who were seen as playing too hard, were voted out unanimously over him.

At the merge, three loved one pairs remained in the game: Ciera and Laura M, Katie and Tina, and Aras and Vytas. Aras had originally spearheaded the elimination of Laura M earlier in the game, and with her return from Redemption Island at the merge, he once again led the charge to vote her out. Vytas won the first individual Immunity challenge, and although skeptical initially, he trusted his brother’s previous Survivor knowledge and went along with the plan.

Unfortunately for the Baskauskas brothers, the remaining singles had formed a new alliance, along with Ciera and Laura M, and blindsided Aras at the first Tribal Council of the merge. Vytas tried to get an alliance together after his brother was eliminated, but he was perceived as too much of a threat and voted out at the next Tribal Council. At the final vote, he became the sole person to vote for Monica to win. He later stated that he voted for Monica because he wanted her to get second place instead of tying with Gervase at the end.

What to expect from him this season: Vytas is a new father, so there’s a good chance that his game-play this time around might be a little less schmoozy and a bit more relaxed and under the radar. But during his time on Survivor: Blood vs. Water he showed that he’s a big strategic threat, as well as a good challenge performer, and this will put a very big target on his back. Even though Vytas was relatively loyal to the alliances he made, there is something about him that comes across very shady. He was very open about using his past problems with drug addiction to gain sympathy from the women, and exploiting his reformed bad boy image for an advantage in the game. That worked to an extent the first go around, but Vytas won’t be able to return to that well this time.

His connection to Ciera, while they were never directly aligned, will also put a target on him because like Vytas, Ciera is perceived as a schemer, and the combination of them together is going to cause fear and panic amongst the other players.

There was also talk of a Brad Culpepper led Blood vs. Water pre-game alliance. This was back when the rumored voting pool also included Hayden Moss and John Cody, two other members of the Blood vs. Water cast. Regardless of whether this was true or not, the other cast members will be aware of the rumor, and there could be resentment against Vytas for this.

I expect that Vytas will try and play like he is a lone wolf, even if he has got pre-game allies. He will quickly try and distance himself from Ciera, and other potential connections like Terry (who played with his brother Aras on Survivor: Panama). But this attempt to distance himself could end up back-firing, as it may appear to come across sketchy. Much like with Ciera, I think Vytas will come in intending to play one way, but be forced into an underdog position very early. The difference is that I think Ciera will see her blindside coming and attempt to counter it, whereas I think Vytas may be hoodwinked by more experienced, smarter players and be victim to an early blindside that he had no idea was coming.

Prediction: It’s going to be very interesting to see how differently Vytas plays without being concerned about his brother’s safety. I think he will want to craft his own legacy on Survivor and not one that is shared with his younger sibling. I’m just not sure that legacy is going to be a positive one. Vytas does have the ability to make a deep run, but I think it would take a lot of luck at the beginning for that to happen. If he is on a strong tribe that can win the first couple of Immunity challenges then that could give Vytas enough time to get in good with a majority alliance; even if its only temporary.

If he can prove his worth around camp and in challenges, while making sure at least one or two others are targets ahead of him, then he just might have a chance. But I just have a sense that the Blood vs. Water cast members are screwed because of how they played originally, coupled with the pre-game rumors. Inside Survivor predicts that Vytas will be an early pre-merge boot.

Thanks for reading our Survivor Second Chance Retrospective for Vytas Baskauskas.

What do you think Vytas’s chances are next season? Leave your comments below.

Best Episode Rankings - No. 27 - "Zipping Over the Cuckoo’s Nest"

Rumor: More Former Survivors To Compete On MTV's The Challenge