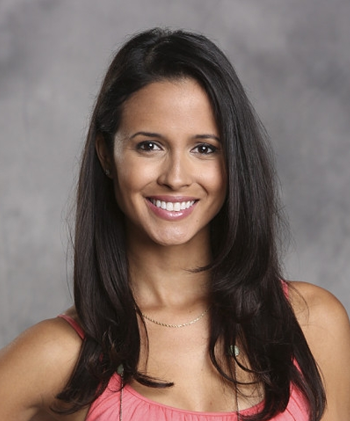 Age: 30
Hometown: San Diego, California
Previous Season: Survivor: Samoa
Previous Placing: 7th
Most Memorable Moment: Telling Russell Hantz to his face that she would “make or break” him on the jury.

What happened in her previous season: Monica Padilla was one of those unfortunate cast members that appeared on Survivor: Samoa, where if your name wasn’t Russell Hantz or Shambo then you were relegated to nothing more than a glorified background extra. With the editing so lopsided in that season it is hard to get a full grasp on Monica’s game. Monica was a member of the dominant but ultimately ill-fated Galu tribe. Galu enjoyed a winning streak that kept them away from Tribal Council, but when they did go to Tribal, it was Monica’s name on the chopping block. Her challenge performances were never that great, and she was a target at Galu’s first Tribal because of this, but she was saved due to her social game and the bonds she’d made with her fellow castaways.

Monica had formed a tight alliance with Laura and Kelly, and they planned to vote out Shambo at the Day 15 Tribal Council. But Monica was unaware that the men of the tribe had a counter plan to use Shambo to blindside Monica. Luckily, Monica was spared when Russell Swan had to be medically evacuated and the vote was cancelled.

At the merge, Galu came in with an 8-4 advantage over the Foa Foa tribe but was systematically destroyed by a combination of in-tribe-paranoia and Russell’s many idols. Russell approached Monica about an alliance, and he showed her his Hidden Immunity Idol. From this point on Monica knew that Russell was a dangerous player, and even though he incorrectly used his idol at the first merge vote, Monica was worried he had found another one. She wanted her alliance to vote out Natalie as a fail-safe at the next Tribal Council just in case Russell did have something up his sleeve. However, Galu decided to put all their votes on Russell, who did, in fact, have another idol, and Kelly was blindsided.

After realizing that Shambo had indeed flipped to the Foa Foa alliance, Monica came up with a plan to bluff the Foas Foas into voting for John to avoid a tie, but John refused to go along with the idea. At Tribal Council the vote was split 5-5 between Laura and Natalie, and John flipped at the re-vote, sending Laura to the jury. Monica had lost her closest ally and was mad at John for his betrayal. John was blindsided at the next vote. She tried her hardest to change the course of the game but was unable to make any headway.

Before she was voted out, she told Russell that he should be voting out people that would vote for him to win, and claimed that she would be voting for someone that needs the money (aware of Russell’s claims of being a millionaire). She told him if he sends her to the jury she would make or break him. All this did was agitate Russell further, and Monica was voted out in seventh place. Monica kept true to her word and voted for Natalie to win the million dollars.

What to expect from her this season: I expect Monica to do very well on Survivor Second Chance. Most people tend to remember Survivor: Samoa as the debut season of Russell Hantz, and the rest of the cast are tragically forgotten. But that actually bodes well for Monica because she isn’t coming in as a big target. Most people will see her as the pretty girl who looks good in a bikini, and that is certainly the image Monica played up to in her campaign process. This is great for Monica (and perverts everywhere). The fewer people know about her game the better.

The thing is, despite her lack of edit in Samoa, she showed herself to be a scrappy player with a good sense of game-awareness and strong social skills. She is also the lone Samoa member, so isn’t entering the game with any obvious pre-built relationships that could make her a target. Of course, Monica may have been involved in pre-game alliance talks, but we have no way of knowing the details of that. She is approachable and easy-going, so I expect to see her forming bonds early in the game.

The biggest fear, much like with Kelley Wentworth, is if there is a negative sentiment against the unassuming female contestants due to their past success in returnee seasons. Monica doesn’t seem like a target on paper, but ironically this could actually make her a target when playing against smart superfans who are aware of Survivor history. People may be scared that she will drift by unnoticed and then make a run at the end.

But like I said before, even if certain players are thinking along those lines, thinking it and putting it into action are very different things. They may be aware that Monica is the kind of player that does well in returnee seasons, but will they really take her out early when more obvious immediate threats like Kass, Spencer, and Joe exist? I don’t see it. If Monica does leave early, it will likely be due to her lackluster challenge performances. Expect to see Monica making up the numbers of an early alliance while portraying herself as a loyal and trustworthy soldier. But if she makes it deep then I expect to see more of the strategist we got glimpses of in Samoa and this time it could pay off.

Prediction: Monica is exactly the kind of person that wins this sort of season. Even if her fellow cast members are aware of that, I don’t see them targeting her for a while. There is no reason why she shouldn’t make a deep run into the merge. I don’t see her getting voted out early unless she totally flops in a challenge and is the sole reason for her tribe losing and going to Tribal Council.

I see Monica as someone that the bigger targets will need to use as a vote to take out the other big targets, and Monica should have no trouble playing that role. I’m sure Monica doesn’t want to be under-edited like last time and will, therefore, try to play a more assertive and risk-taking game; hopefully, she is smart enough to wait until the merge to switch into that gear. Inside Survivor predicts that Monica will be a trusted alliance member, before making big individual moves come the merge, which should take her to around final five or six.

Thanks for reading our Survivor Second Chance Retrospective for Monica Padilla.

What do you think Monica’s chances are next season? Leave your comments below.