I suspect a fair amount of people have been eagerly awaiting this week’s edition of What You Didn’t See. The Survivor online community has been rife with speculation about what truly happened between Kass and Tasha. Blow-ups on the beach? Tension-filled tribal council? Accusations of racism? There are all sorts of rumors doing the rounds.

That preamble is unfortunately not leading to a grand explanation. Not because I want to tease or withhold information but because of the sensitive subject matter. Yes, an incident took place between Kass and Tasha that involved racial issues. Yes, this was a huge topic at tribal council and was the reason why both Kass and Tasha seemed so pent-up and intense. But without knowing all the facts or speaking to those directly involved, I am choosing not to go into the issue any further.

Probst Forgets About the Jury

Perhaps a little shaken after the intense tribal council, Jeff Probst forgot a rather important part of the vote-off. When he read out the votes and revealed that Kass was the seventh person voted out, he forgot to inform her and the rest of the tribe that she was the first member of the jury. Members of the production team had to chase Kass down and let her know that she was in fact on the jury. The rest of the tribe were informed after that night’s tribal council while having their microphones removed before heading back into camp.

Yes, this means that Jeff Probst had to re-record the vote reveal with the jury line included after the event, and it was edited into the episode. Meaning that Tasha’s “surprised” reaction wasn’t actually in relation to the jury news. 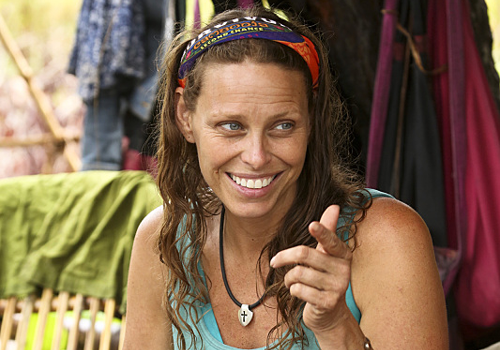 Last week we revealed the merged tribe name: Orkun. But which castaway came up with the name? It took the tribe days to finally settle on a name that both they and production were satisfied with (production can nix any name they don’t like or deem inappropriate). Ideas ranged from yoga terms to names of animals, plants, and snakes listed in the production provided safety book.

Finally, they settled on Orkun, which was suggested by Kimmi, the Khmer word for “thank you,” as a gesture to all the fans that voted them back onto the season. This moment can be seen in this secret scene provided by CBS.

4 responses to “Survivor: Cambodia Episode 7 – What You Didn’t See”