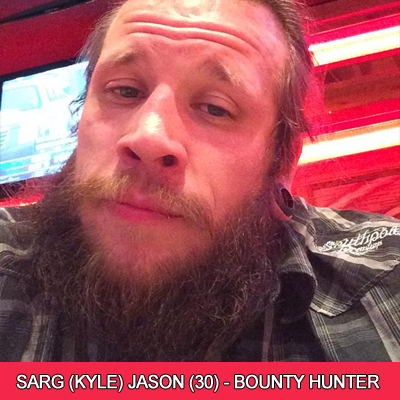 Kyle “Sarg” Jason is 30 years old and currently works as a Bounty Hunter for his own company US Apprehension, as well as a Private Investigator for Phase 4 Investigations. Jason, who currently lives in Roseville, Michigan, previously served as a sergeant in the US Army for over five years where he was posted in Iraq, before joining Blackwater in Afghanistan which he left after two years for personal reasons. He was educated at Macomb Community College in the Greater Detroit Area. His day to day work involves protection and security, fugitive recovery, vehicle tracking and bail bond services. Jason is also a supporter of the Veterans of Foreign Wars Foundation.

Survivor has a long history of casting former members of the military, perhaps most famously is retired Navy SEAL Rudy Boesch from Survivor: Borneo and Survivor: All-Stars, and more recently Army physician John Cody from Survivor: Blood vs. Water. With his time in the military and his work as a Bounty Hunter, Sarg Jason will be a part of the Brawn tribe on Survivor Kaôh Rōng – Brawn vs. Brains vs. Beauty 2.