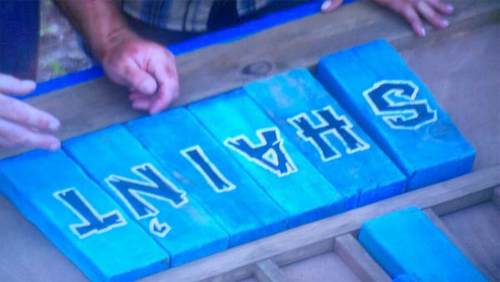 It’s a word that definitely isn’t recognized by Webster, but is well known throughout the Survivor community. In case you don’t remember this obscure reference or have a life, this word was brought to life by the postal worker that everyone loves to hate, Dan Foley. Dan’s time on Survivor was characterized by piss-poor apologies, harsh comments, and questionable puzzle skills. In a reward challenge, two teams were tasked to solve an anagram, with the final result being “A Reward With All the Fixin’s,” a very common Probst-ism. Hours elapsed, however, as both teams failed to figure out this phrase. In the meantime, shain’t is born, crushing the dreams of grammar abiding citizens everywhere.

When you think about it though, this season was littered with face palm moments during puzzles. I enter Exhibits A and B into evidence for closer examination. 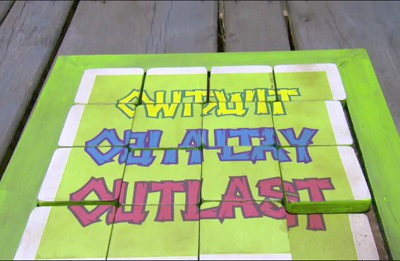 The puzzle during the immunity challenge in Episode 4 of Survivor: Millennials vs. Gen X gave me some serious flashbacks to the shain’t challenge. After all the buildup surrounding the physical aspect, the entire challenge came down to a battle of wits. Literally, no amount of strength or stamina could help either tribe at this stage. As the chyron showed the time elapsed, the fate of someone’s game was at the mercy of three people piecing together a phrase (one that isn’t even a common Survivor phrase).

Survivor used to be a game that was heavily reliant on physical strength. As a result, the stronger players were valued and were rarely voted out early. Quickly a precedent arose: the younger and stronger would stay, while the older and weaker were voted out. It’s worth noting that “older” people can be incredibly athletic/strong and “younger” people can easily be the opposite (e.g. Skinny Ryan). Nowadays, however, the game has shifted to value those that can solve complex puzzles quickly.

So, is it to say that performances like Chris’ and Michaela’s during the reward challenge aren’t as effective? Definitely not. A tribe or alliance with a nice mix of brains and brawn can go incredibly far together. Stephen and JT (the Wizard and the Warrior, respectively) embodied that idea. Koror, one of my favorite tribes ever, was incredibly successful because they used wit and ingenuity to compliment their strength. This also doesn’t mean that David and Ken are going to waltz their way to the finals.

As the game moves from the generational split to mixed, new alliances are inevitably going to form. These alliances hinge on the numbers, factoring in how many people were from each tribe and who can hold a majority. These majorities are often determined by the challenges, where one more tribal immunity win could mean the difference between pre-merge and making the final 5 or 6.

Personally, I don’t know whether I like that the game has shifted away from “X lost the challenge for us, X is going home.” While it’s not always the best way to think about votes, keeping people accountable for their actions is a major part of Survivor. Without this, people can Dan Lembo their way through the game, which is, frankly, boring.

Even though the castaways are constantly dancing between the ideas of “I need to keep X to win challenges now” and “X will do well in challenges after the merge,” people forget that anything can happen. Even the most secure and confident players can meet their unexpected demise when at tribal council. I, for one, hope that as these new tribes form, people look to getting to the merge by winning challenges, and not solely from looking at numbers. Numbers can easily change, but you can’t get voted out if you’re not at tribal.