After a crazy tribal that ended with Jessica pulling the black rock, Vinaka returned to camp, trying to reinstall some sense of normalcy. Ken, on a trip to treemail, learned that Jessica willed him the Legacy Advantage, keeping her word from the days at Gen X. The reward challenge brought family visits, which has been clouded in controversy after Adam’s reward-steal became public knowledge. Vowing not to use it, Adam would hold true to his word, as Jay won and brought Will, Sunday, Adam, and their loved ones along for a barbecue. As a show of gratitude, Adam gave Jay his advantage.

Quickly, strategy was back on the docket, with Will leading the charge to prove his relevance in the game. Adam won immunity, beating Jay and leaving the floor open to vote out Zeke. With the usual suspects pitted against each other, Ken called out Will for being deceitful. With Team Zeke voting for Hannah and Team not-Zeke voting Zeke, Will flipped, voting Zeke, but it wouldn’t matter, as Adam whipped his immunity idol from his crotch and played it on Hannah. Zeke was voted out 5-0.

Espa-don’t you see the similarities? 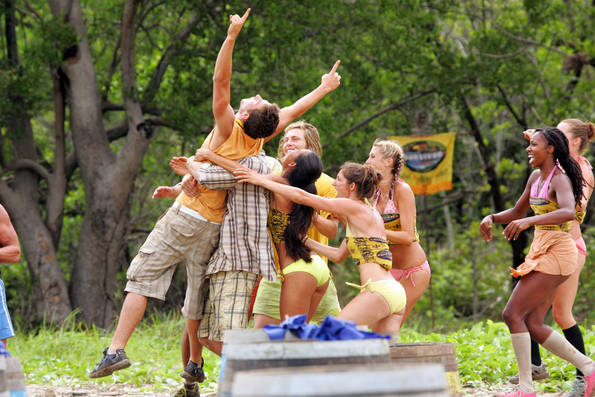 12 season ago, CBS split the tribes by age, the under 30s and the over 40s. Survivor: Nicaragua brought us over-the-top characters like Na Onka, gamebots like Marty, and the perpetually bum-puzzled in Wendy Jo. If you ask me, the 30/40 age split was far more definite than this season’s division where two people only one year apart were given massively different tribal connotations. That aside, Survivor: Millennials vs. Gen X is the first time since Nicaragua that production has attempted an age split. In honor of this, I’ll be paying homage to this wonderfully terrible season.

-Yet another odd advantage which will inevitably only be in one season ever.

In Nicaragua, we had the Medallion of Power. It was a massive flop, basically only there to ensure that there wouldn’t be an Ulong situation before the tribe swap. Unsurprisingly, the Medallion of Power was quickly phased out and never reintroduced into later seasons. This season, the Legacy Advantage was also introduced in the first few minutes of the premiere but was nowhere near a focal point until recently.

Holding the advantage for 30 days or so, the only person Jessica told about it was Ken, and she also vowed to give it to him if she was voted out. Jessica held faithful to this promise. If you ask me, Jessica’s ability to keep her alliance together was a massively overlooked quality of her game. Ken’s name has come up at tribal council a few times, but he’s definitely not viewed as a major player. Even though he made a massive blunder this episode, he still voted with the majority, so I would be surprised if Ken wasn’t the one that eventually uses the advantage.

See you back at the camp!

The focus has been on the family visit far more this season since Adam had the opportunity to steal someone’s reward. Call me a scrooge, but I don’t usually like the family visit since it takes up so much time to introduce everyone and banter. Luckily, I’m not a robot and do enjoy them from time to time. My favorite family moment of all time is from Survivor: Tocantins (honorable mention to HvV and the “dammit Reid” dilemma) when everyone gave Taj all of their auction money to buy the loved one visit.

The family visit this season was equally tear inducing, as Adam’s emotions welled up into some incredibly heartfelt moments. Despite this overly emotional moment, you can definitely tell that Adam was still playing the game. At the barbecue, Adam handed over his kryptonite advantage to Jay. As long as Adam lets that become public knowledge, he has very effectively played that advantage away in a positive manner. Adam had a shaky couple of weeks but reaching the loved one visit has seemingly given him new life and a further drive to win this game.

-Nothing witty, literally the same challenge.

I tweeted this out during this episode, but this week’s immunity challenge is incredibly similar to one in Nicaragua. This is basically the reason this whole recap is mentioning that season. In Nicaragua, they split and had a male and female winner, won by Jane (who outlasted all of the men for ego purposes) and Fabio who narrowly beat Chase. Interestingly, the men’s side of this challenge was the person who would eventually win the entire game, beating the person who came in second. In this challenge, Adam narrowly held out over Jay. I don’t think there’s anything to be drawn from this, but it would be funny if this challenge became a predictor of who wins the season.

-Milk fan, Will Wahl, ready to take the strategy udders into his own hands.

For the majority of the season, youngster and clearly sober Will Wahl has been a member of the Sunday Burquest screentime club. Following the merge, Will has been working his way into relevance, with a huge move this week in terms of taking his fate into his own hands. Much like Adam, Will was also spurred on by the loved one visit, seeing his mom made him realize what he’s playing for and convinced him he needed to step up his game and build his resume. His move was an incredibly dangerous one, as it can set him up to win, but also put a target on his back that prevents him from moving forward. Last week, I called for an Ikabula reunion, but this basically puts the nail in the coffin on that, unless Hannah and Will move back as a package deal.

What surprised me in this move by Will was his decision to, once again, distance himself from Jay. From those two being incredibly close a week ago, Will has used his relationship with Jay as a fount of information and leverage. With Jay as the likely perma-target, distancing himself from Jay and getting in with a solid group is a decent move on paper. It’s a total “time will tell” move, but Will has put his cards on the table, and it’s no secret that he’s playing.

-Probst, realizing he has to touch the crotch idol.

In Survivor: Marquesas, underdog Kathy Vavrick-O’Brien won the first immunity and asked if people would be offended if she didn’t bring her bag to tribal council since she was guaranteed not to go home. In an era where bags (and pockets) conceal idols, not taking your bag to tribal is a massive indication of not having an idol. This tribal, Adam, who held immunity, didn’t bring his bag but brought his idol…hidden his crotch. Adding fuel to the phallic fire (remember what the immunity necklace looks like?), Adam pulled said crotch-idol out and played it for Hannah, a move that wasn’t entirely necessary with Will flipping.

Very early on this season, I called for a ton of idol plays, which has proven to be a relatively accurate prediction. We entered this season riding a streak of correct idol plays; the last incorrect idol play was all the way back in Survivor: Cagayan. Twice this season, an idol has been played on someone that didn’t technically need it (David saving Ken; Adam saving Hannah). Both idol plays are definitely reasonable in context, but it is interesting to see how quickly this group of supposed superfans are willing to play an idol.

With Zeke voted out this episode, I, along with many, was left with a bitter taste. Zeke was massively hyped up preseason, so I kept expecting him to live up to that. Don’t get me wrong; Zeke played a very commendable game, but I think the bar was set too high for him concerning viewer expectations. In the past few episodes, his edit flipped (without conferring with Edgic) to very brash and overconfident. All we heard from Zeke in the past few episodes seemed to be the storyline about him leading his troops.

This same thing occurred in Survivor: Worlds Apart, where Probst massively hyped the season, only to have it come up short of expectations. Critique the season as you want, but we have to remember that these decisions are based on the unedited entire season. As viewers, we only get a minor glimpse of the whole picture. This also comes into play when you think about returning player seasons, where people like Russell and Amanda were cast directly after their first season based on how they played, and not how they were portrayed.

I’ve been quick to criticize this season, but it has actually been enjoyable. I hope that the rest of the season lives up to the precedent that the season itself has set, not the preseason hype.

-All of us, realizing that there are six days and eight people left.

At the end of this most recent episode, Zeke was voted off on Day 33, leaving eight people in the game. Maybe it’s just me, but the back end of this game seems very forced. At this rate, and assuming a Final 3, they have to vote out five people in 5 days. I would be very surprised if we see any reward challenges before the finale, but it appears we’re going to see a double tribal episode coming up!

Double tribal episodes always worry me, as it’s so crammed, meaning that the boots are obvious (Whitney/Dawn ep in South Pacific – which was correctly pointed out last week by a commenter was a 1hr episode and not 2hr). But I don’t feel like they’ve laid the groundwork for two easy boots, so I’m really interested in seeing how this next episode plays out.

One response to “Episode 12 Review – The Power of Love”