In this week’s episode, we’re left with nine players in the game after the double elimination that resulted in Aaron and Missy joining the jury.

Having lost two of her closest partners in crime on the same night, Elizabeth appears to be the most vulnerable player in the game right now, especially with Elaine no longer on her side. Following Missy’s comment to her right before she left Tribal Council, I’m predicting Elizabeth attempts to take Elaine out in subsequent episodes, but fails to properly execute it. I can’t really see Elizabeth pulling together enough numbers to support her—perhaps only Lauren and Dan among those who are left. As such, I feel like Elizabeth is on borrowed time, and it’s only a matter of episodes before she gets booted.

In the next portion of the preview, we see a shot of Tommy and Lauren—a duo that is already known to be a tight pair working together. We, the viewing audience, have seen plenty of scenes pairing them up in discussion of votes during their time on both the original and swapped Vokai tribes. And on top of our perspective, it is interesting that this alliance is common knowledge to the rest of the players as well. In just the previous boot, Missy and Elizabeth took a shot at Tommy in an attempt to handicap Lauren’s position in the game. I do think these two are going to be brought up as possible targets, but they’ll manage the situation well enough. I feel like they are nicely positioned in the current dynamic, with enough relationships each to survive a few more votes to get to the end.

And to add another layer to their current status, the trailer then reveals Lauren saying, “this is going to change my game” while sharing some information with Tommy. I’m quite torn between this sequence being just a regular moment of strategy, or that Lauren found an advantage of some sort around camp. I’m also thinking that it could be a note sending her to the Island of the Idols, in a similar way to Jamal a few episodes back, but perhaps not a “lesson” that detriments her. In any case, I have a good feeling that it’ll turn out well for Lauren and Tommy and that we’ll be seeing more of Lauren in the coming episodes. 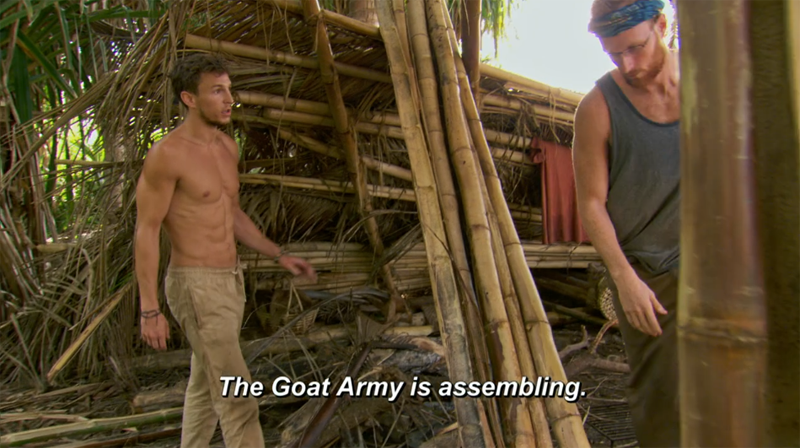 Finally, the preview introduces us to the assembling of a goat army, which seems to be led by Dean. We first see a shot of Tommy and Dean by the shelter, and then a subsequent shot falling on Noura as Dean dramatises this new alliance. My interpretation is that Dean (and Tommy) are looking to align themselves with a couple of people they perceive as goats, to take them to the end as easy contenders to beat in the final vote.

This would include Noura, whom Dean has been dismissing as erratic and crazy for quite some time now and perhaps also Karishma and Elaine, who appear to be on board with Tommy after the Missy vote last Tribal. Karishma, for sure, has been labelled as a goat to protect for the endgame. As such, the alliance I see forming here is one that includes Dean, Tommy, Lauren, Noura, Karishma, and Elaine. That’s more than enough to control who goes home for a couple more votes.

All in all, I’m predicting we’ll see the rise of this goat army alliance, and definitely, the goal for them would be to get out social threats like Janet and physical threats like Elizabeth. If I were to pick a boot for this episode, I sadly think Janet will be eliminated. I feel like Elizabeth isn’t a priority to eliminate, as it’s quite obvious that she doesn’t have many options left.

Leave a comment below with your predictions for this episode!