Next Time is back! This is a blog all about decoding previews, commercials, and previous episodes in order to predict what’s coming next on Survivor.

As always, this blog is 100% spoiler free speculation, and I look forward to reading your predictions as well. Comment below or tweet at me @JacobDerwin!

Part One: Previously On… Survivor

Last week presented us with a unique episode, to put it lightly. My only hope, in regards to the show itself, is that this doesn’t bleed out into the rest of the season. I doubt Zeke and the rest of his tribe want it to anyways. Let’s hope that the main conversation topic of the merge feast isn’t the last tribal so Zeke can go on being “Zeke the Survivor player,” and Varner’s horrifying screw-up can be left behind.

Grade: I feel kind of ridiculous for having made this a prediction because, like, what else would it have been? I’ll take the A, but I don’t deserve it. Survivor is hard, man.

Grade: Not even close. F.

This week’s episode, “There’s a New Sheriff in Town” is a two-part episode, meaning a big ol’ two-hour chunk of our favorite show. It also means I’m probably going to get everything about the second part wrong because a lot happens during every three-day span of the game. Chances are, events that take place in the first hour will affect the second hour! Of course, this doesn’t mean I won’t try. Because I’m a winner.

In a blog earlier this season, I wrote about how I hope the twisty nature of the season would die down after the first few weeks. Not because I don’t like twists, but because when everything about the game is unpredictable at all times, you end up with less of a stable game show and more of a card game that your younger brother made up with rules that only he knows and gets to change on a whim. Alas, even the merge and its feast are susceptible to the ever-changing nature of this season. Here’s this week’s episode description:

“The merge brings another twist in the game that leaves two castaways out of the celebratory feast.”

But anyways, let’s see if I can figure out how this twist is going to work. 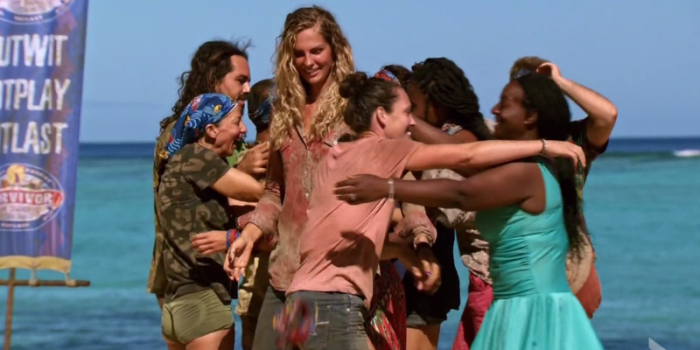 In the commercial spot for this week’s episode, Probst tells the two tribes, “before we merge, you have one decision to make.” From this, I think we can determine that these two isolated castaways will be selected before the merge takes place. My bet is that this becomes an old fashioned exiling process where each tribe selects one player from the other tribe to be sent to Exile (Yacht) Island. Of course, only Debbie knows the pleasures of being exiled, so what probably seems like a pretty brutal twist of fate for two players will become its own beautiful advantage. Who wants to share a feast with twelve other people when you can pig out with only one?

The other thing that comes to mind is that tiny box of advantages that Cochran presented to Debbie during her stay on the yacht. She only got to pick one of those three advantage options, so perhaps the other two will each get one of the remaining ones: a fake idol kit and a challenge advantage, probably modified to benefit just the individual player during an individual immunity challenge.

Now, let’s see if I can figure out who’s getting left out of the merge celebrations. Initially, I took a close look at the shots of everyone hugging and handshaking and dropping their buffs during the teaser. I wanted to see who wasn’t in the shots. Three players were missing: Hali, Brad, and Troyzan. This might have been a good start, but I’m fairly certain that one player from each tribe are to be left out of the feast, and all three of those players are currently on Mana. So much for that plan. 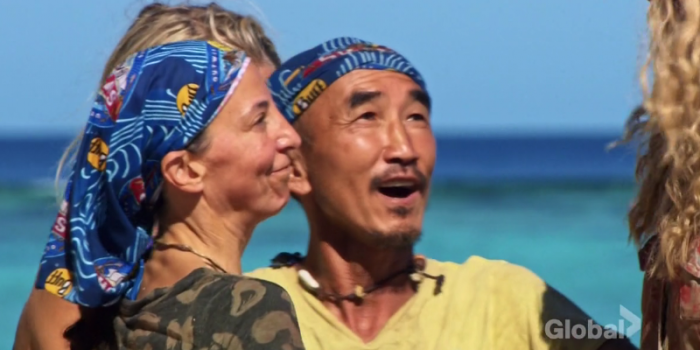 That also means that everyone got all excited and dropped their buffs and the like, and then Probst dropped the twist bombshell on them. Not cool, man.

Since I can’t find any hard evidence, I’m just gonna take a wild guess based off of who we don’t see a lot of in any of the preview materials. During the teaser, we see most of the players on the merged tribe talking to each other or the camera, but we don’t see Aubry, Tai or Zeke. That said, in the commercial spot, Zeke gets a clip from one of his confessionals, “it’s the smiles before the bloodbath.” I’m assuming that confessional is shot at camp right after the merge celebrations.

Therefore, I’m going to predict that Aubry and Tai are left out of the merge feast, but get a small feast of their own on a yacht, as well as an advantage each. This means Tai might potentially have two idols and a fake one if I’m right!

All right! Everyone take a deep breath. Time to figure out who’s in control of this gigantic tribe.

We haven’t seen a whole lot of Sierra, but this episode is likely going to be a big one for her because of the legacy advantage she has in her back pocket. Unlike the last iteration of the legacy advantage, this one straight up tells us that it grants the holder immunity at either the final thirteen or the final six. Since we’re thirteen now and everything appears to be as unstable as possible at camp, I wouldn’t doubt that Sierra is getting ready to use the advantage.

Take all that and add the fact that the name of the episode comes from something we see Sierra say to Debbie in the hammock during last week’s teaser. I’m assuming this means Sierra is taking some sort of control of the numbers right after the merge thanks to the confidence her immunity gives her. When you have unquestioned safety, you’re certainly more likely to take risks and have bolder strategic conversations than you would otherwise. 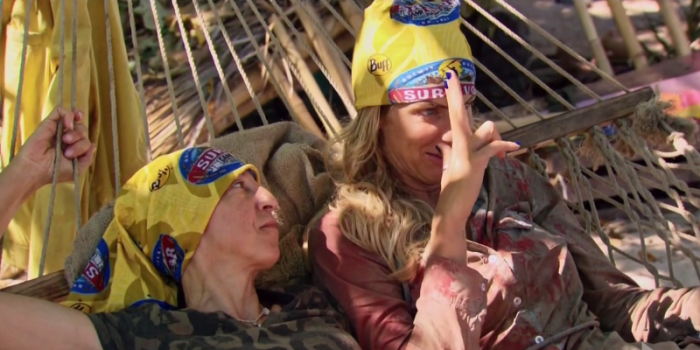 Right before the clip of her saying her sheriff line and making finger guns to Debbie, we see a brief shot of Sierra, Debbie, Hali, Michaela, and Cirie all talking, with Cirie rocking Sierra in the hammock. Unless Sierra is totally hogging the hammock, I think it’s fair to guess that these shots are from the same general scene.

In fact, a lot of the teaser shows shots of these players around camp or in confessionals. We have a quick shot of a Cirie confessional where she tells us “the game is on,” a clip of Sierra appearing to pitch something to Andrea and Sarah on the beach, a clip of Hali telling us how quickly everyone is scrambling for leverage, and a clip of Sierra telling us she’s going in “guns blazing.” We also get a quick clip of Brad, Ozzy and Troyzan chatting.

Basically, I’m trying to think about every little relationship we’ve seen develop throughout the pre-merge, combine that with what we see in these previews, and figure out who’s left with the fewest sturdy options. 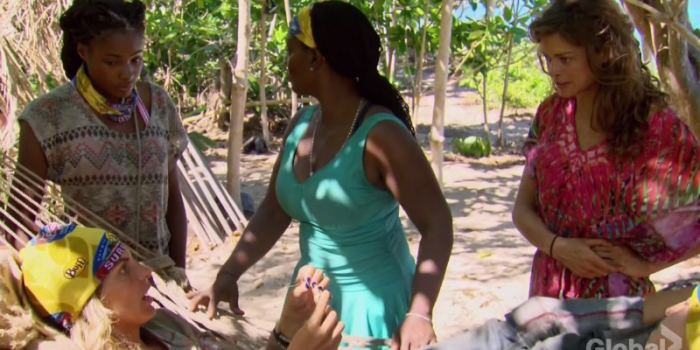 Let’s assume that Sierra, Brad, Hali, Tai and even Debbie are all down to work with each other after their stint on Mana 2. Let’s also assume that Brad’s connection with Troyzan has held strong from their brief stay on Mana 3 with Sierra, Cirie, and Michaela who all are shown talking to each other in the previews. During last week’s episode, we also got to see Aubry approach Brad in hopes of aligning with him, so I would include Aubry in this mish-mosh despite not seeing her in the previews much. Finally, we know that Troyzan trusts Sarah from their time on Tavua, and Sarah has been shown to be close with Andrea.

In this scenario that I’m trying to build, we’re left with Zeke and Ozzy without stable connections to the core intersections of these alliances. We do get a clip of Ozzy talking to Brad and Troyzan, but it appears that it is, in fact, Ozzy talking to Brad and Troyzan. We’ve established that Brad and Troy are down to work together, but Ozzy might simply be pleading for his life. Perhaps he wants to convince the remaining guys to work together since there’s a pretty notable female majority.

Voting out Ozzy has been a goal of a bunch of players this season so far, and now is when he becomes most dangerous. The guy is an athletic superstar; he’s undoubtedly a challenge threat. Combine that with his lack of obvious relationships in the game, and you have a pretty clear target. 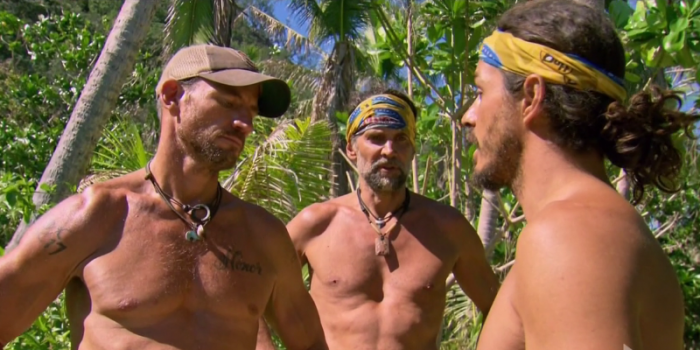 At least for the first hour, my bet is on Ozzy getting voted out. But of course, that leaves a whole second hour in question.

I don’t have much to go on here, but I would bet that Sierra’s legacy advantage play is bound to raise some eyebrows. Maybe some of these players who trust her are going to trust her less because of her ability to keep such a secret. Maybe when she plays it, certain allies will become agitated about having been lulled into a false sense of security for the vote by someone who wasn’t even at risk for elimination.

Perhaps the new sheriff in town is about to get shot down.

Sure, why not? I think Sierra is going to have a huge first hour and a disastrous second hour ending in her elimination. 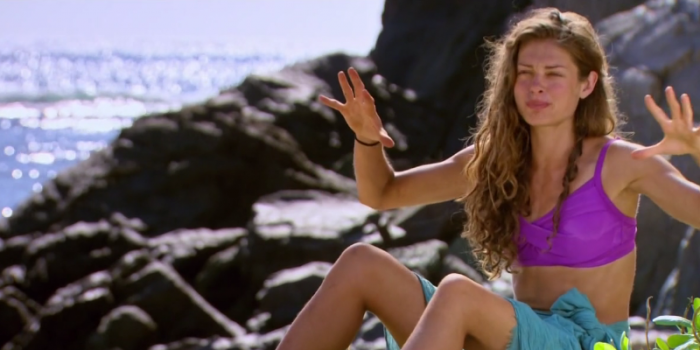 As I said last week, I’m committed to backing my winner picks until they are eliminated. Currently, I’m on pick number two with Hali. I think the merge episode will be a big indicator of whether she was a good choice. Based on the previews at least, it appears she’s remaining relevant to the narrative of the season, giving her takes on what’s happening at camp.

I also think Brad is in a great spot going into the merge, so I’ll have a backup if things go awry.

It’s been a pretty loaded blog full of potentially fan fiction-y theories and commercial analysis, so let’s break it down into a nice bite-sized snack.

Thank you for reading this week’s blog! Please feel free to share your predictions in the comments below, or start a conversation with me on Twitter. I’m @JacobDerwin.