Survivor star Sunday Burquest has passed away at 50 years old after a hard-fought battle with cancer, as confirmed over the weekend in an Instagram post from Sunday’s daughter Kennedy Burquest.

In 2018, Sunday reached out to me to ask if she could write a piece for Inside Survivor regarding cast release day. The focus of her article was on the snap judgments made by many Survivor fans, bloggers, and podcasters about the new cast members and how those opinions can quickly become toxic. The recurring message of Sunday’s piece was a simple one: be kind.

There was no one kinder or more positive in the Survivor community than Sunday. A constant source of light with a beaming smile, Sunday was a warm and friendly presence throughout Survivor: Millennials vs. Gen-X, which she competed on in 2016. While unfortunately underedited on screen, it was clear to see even in those brief moments that Sunday made genuine connections with Millennials and Gen-Xers alike, resulting in a seventh-place finish.

Missing in the edit, however, was how much of a smart and strategic player Sunday was, someone with a real passion for the game of Survivor. In fact, it was Sunday’s misdirection during the epic rock draw Tribal Council that played a big part in David Wright misusing his idol on Ken McNickle. Fortunately, Sunday got to better show off her gameplay and strategic skills post-Survivor, battling it out on the Survivor Sequester Mini last year and winning a special one-off edition of the online college game, Survivor: Maryland.

While I never had the opportunity to meet Sunday in person (being separated by an entire ocean and all), I did have the pleasure of interacting with her online. Since starting Inside Survivor almost six years ago, I’ve had the chance to chat with numerous castaways. But there is only a small handful of Survivors that I would consider friends—people I keep in touch with and talk to on at least a semi-regular basis. Sunday was one of those Survivors that I was proud to call a friend, and I’m sure there are many others like me who Sunday made a connection with online.

Sunday was always happy to chat, whether about Survivor or life in general. She was thoughtful and respectful when sharing her opinions on the current season and the castaways; even if she disagreed with a move a player had made, she would see the bright side, having been in their shoes herself. Sunday was not a person who operated in doom and gloom. She chose to spread good vibes whenever possible—except when it came to her season 33 cast photo, a bugbear that became a running joke every season when the new cast received their shiny, professional photos and season 33 remained with their unflattering in-action shots.

Speaking of cast photos, one of my first interactions with Sunday was over a series of photos from her time on Millennials vs. Gen-X, which we came to refer to as her “Boss Lady” pose:

This was an example of Sunday’s fun and goofy sense of humor. Whether it was something silly she said or accidentally sending me a string of dog gifs in a real “Gen-X” moment, she could laugh at herself and make any situation brighter. 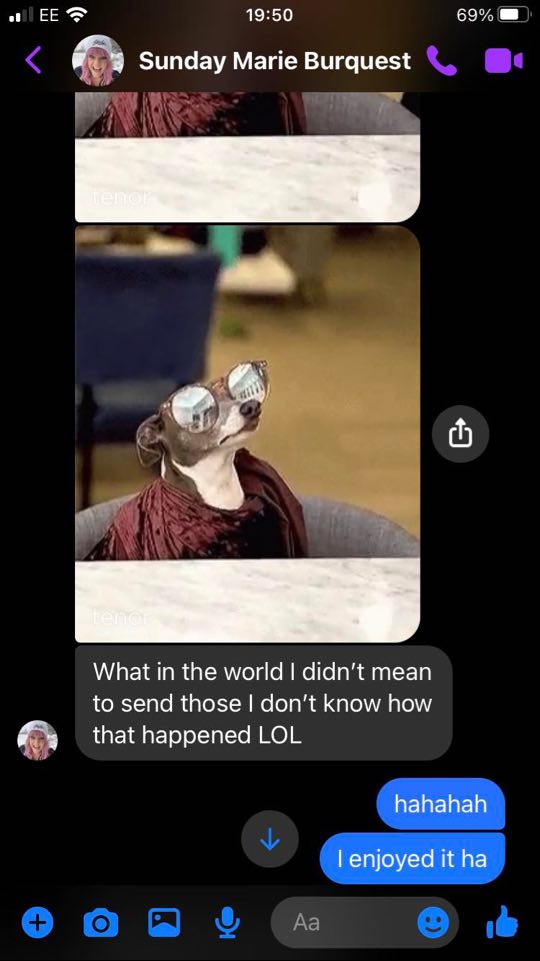 She was also brimming with ideas. I got a kick every time I saw a message pop up from Sunday pitching an idea for a new article. It was often followed by a self-deprecating post doubting if the idea was any good. But she had no reason to be doubtful; her ideas were always great. It’s a privilege that Sunday took time out of her busy schedule (as a wife, mother, author, and inspirational speaker) to write articles for Inside Survivor, and I’m so happy that her words will live on here forever.

Sunday was a Survivor in every sense of the word. She’d previously battled and beaten breast cancer in 2012, a fact that made it all the more tragic when she was diagnosed with terminal esophageal and ovarian cancer in 2020. Despite this heartbreaking news, Sunday continued to have a positive outlook, powered by her faith and her family, who she obviously adored (she spoke many times of wanting to play a Blood vs. Water season with her son Carter). She was still cheerful, full of ideas, and was there to offer her well wishes to my family while fighting their own battles with cancer.

While we understandably didn’t get to chat as much over the past few months as she underwent intensive treatment, I look back at the last message she sent in late January, and it makes me smile. It was a simple but powerful: “Thank you friend 🥰”. I only got to know a small part of Sunday via the internet, but I will forever count myself lucky that I got to call such a wonderful, funny, kind, and uplifting person a friend.

All of us here at Inside Survivor would like to send our love and best wishes to Sunday’s friends and family at this difficult time. I will also be making a donation to Stand Up To Cancer in Sunday’s honor. If you would like to do the same, you can do so at https://standuptocancer.org/donate/. Likewise, you can donate to Sunday’s GoFundMe.

Rest in peace, Sunday. You will be missed. ❤️️