The “dead grandma lie” remains one of Survivor’s most infamous moments and a move which cemented Jon Dalton (aka Jonny Fairplay) as one of reality-tv’s elite villians. It’s been fourteen years since Fairplay shocked millions of TV viewers with his dastardly gameplay on Survivor: Pearl Islands, but the former two-time castaway is still very much an active part of the Survivor community, now launching his very own Survivor podcast. Inside Survivor caught up with Fairplay to discuss his new podcast series, his thoughts on the Heroes vs. Healers vs. Hustlers premiere, and whether or not he would play again.

1) Hey Jonny! You’ve started a Survivor podcast – Survival of the Fairest. Give us your best wrestling style promo and sell us on this podcast. Why should fans listen? What is different about it than other Survivor podcasts?

Let me tell you something bruther… Honestly I’ve been asked for years to do a Survivor podcast but nothing really felt right co-host wise. I wanted another personality that I could play off of. And no one really jumped off the page chemistry wise for a Survivor-only podcast. In addition, I dabble in technology and do what I’m told tech wise but production wise I have no clue what I’m doing. So I really had no desire to do this if all the components were not in place. Then along came Conrad Thompson.

I’ve been listening to Something to Wrestle with Bruce Prichard and What Happened When Monday with Tony Schiavone and loved them both but honestly the interplay between each of them and Conrad to me was the highlight of each of those shows. A couple of months ago Conrad and I were talking and I halfway jokingly suggested a Survivor pod with him, and he said, “Hell Yeah!” Fast forward to last Tuesday, Conrad puts together a deal with Audioboom and Wednesday night you have Conrad Thompson watching Survivor for the first time ever and two hours later creating audio gold.

I’m happy with what came together. I love the fresh eyes that Conrad brings to the world of Survivor podcasts. I hope people enjoy the behind the scenes look that I bring to the table and the chemistry that the two of us have collectively. I just ask that people give it a shot. I’m not as horrible a person as most people think. The show is less than an hour. Conrad is extremely likable. And we’ll have new t-shirts each week! 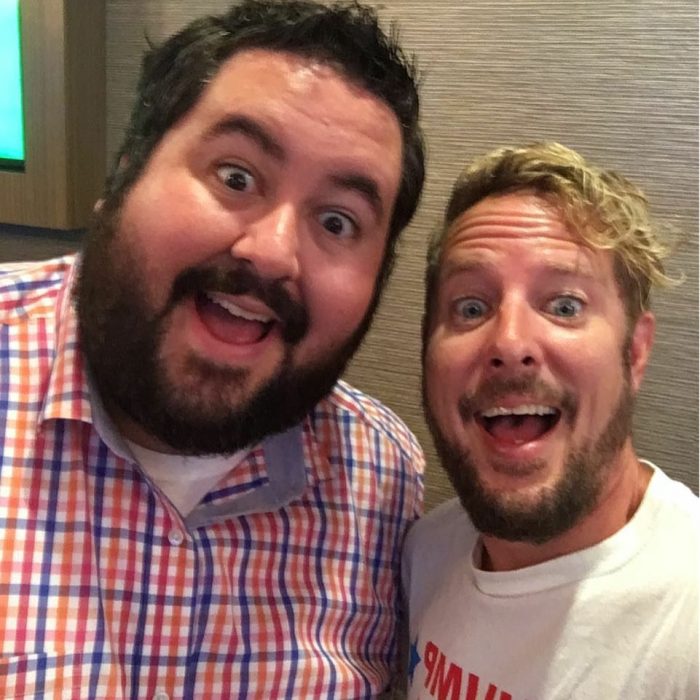 2) Is that current NXT star Eric Young doing the voiceovers in the podcast?

That’s actually Matt Koon, producer for Something to Wrestle with Bruce Prichard, What Happened When Monday with Tony Schiavone and now Jonny Fairplay & Conrad Thompson present Survival of the Fairest. He’s a music school principal in Virginia and an incredible talent.

3) Keeping on the wrestling theme for a minute, is it true you attended a Survivor premiere party in North Carolina last week with WWE superstar Matt Hardy? How did that happen?

I hosted a Survivor premiere party last Wednesday night at Reboot Arcade Bar in Winston Salem NC. The local CBS affiliate came out and shot segments for the 5 pm, 5:30 pm, 6 pm, and 11 pm news. I was in a dunking booth until the premiere as the preshow attraction. I received a message from Reby Hardy (Matt Hardy’s wife) asking if it was ok if her and Matt brought their kids to my premiere party; i.e. kid-friendly. I replied ‘absolutely!’ We all had dinner; including my girlfriend and daughters Piper and Madilyn. We later played the Royal Rumble arcade game which Matt is featured on the game’s cabinet. Matt was himself and his brother Jeff. I was the Godfather and D-Lo Brown. Piper spent the majority of the evening playing with King Maxel, Matt and Reby’s son. For the record, Reby is a pinball shark, don’t play her for money! Also in attendance were fellow Survivor’s Jane Bright and Dana Lambert. It was really cool that everyone showed up and fun event for the fans. 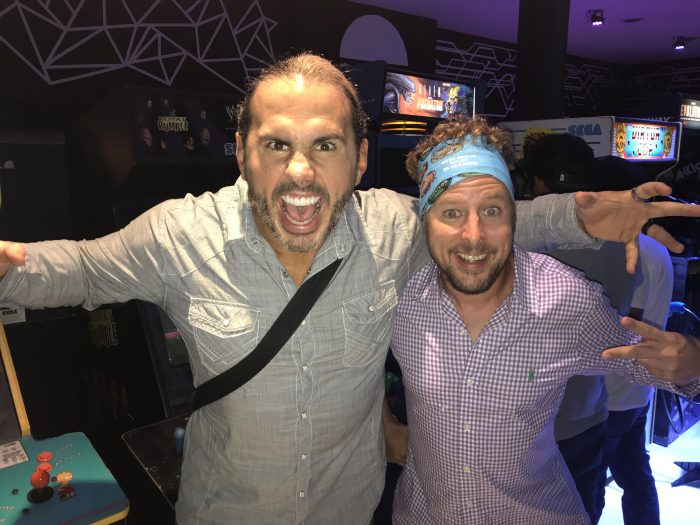 I thought the premiere was good. I thought there were some fun personalities, some eye candy and some people that I’m not very fond of. Those seem to be the key ingredients to a successful season. I think the concept is harmless enough but as discussed in the first episode of Survivor of the Fairest podcast, no one is 2017 considers a “hustler” as a real go getter.

5) Did any of the players stand out to you in episode one? Anyone you think has potential to go far? Anyone with Fairplay villain potential?

I think Conrad and I really did a nice job of breaking down the characters on the episode of Survival of the Fairest but the stand outs to me are Sex Doctor Mike and Ryan. Ali appears to have the early winner edit but nothing over the top. No one can ever be Jonny Fairplay but I’m not a fan of Joe.

6) It’s been almost 10 years since you last appeared on Survivor. Firstly, are you surprised the show is still going? And what do you think of the modern version of the game compared to old school Survivor?

Not surprised at all. It’s a smart concept and compared to other shows in the Top 15 each week ratings-wise, it’s on the lower end budget wise. Keep riding that horse! The modern version isn’t that far off from what you saw in more complex players from seasons past. What Stephen Fishbach refers to as voting blocs, I call playing the game like Rob Cesternino or myself; it’s simply a smart player jumping from alliance to alliance without consequence. 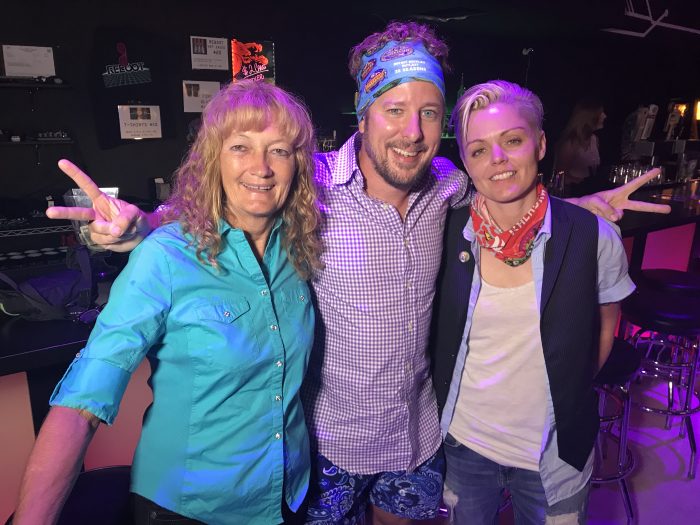 7) Would you go back on the show if invited? Or are you still on Probst’s s**t-list? And what themed season would you most like to compete on?

If invited… depends on the theme. I don’t THINK I’m still on Probst’s s**t list but it’s not like we’ve talked. I’m interested in a Legends season, I’d like to prove to the other Survivors, the fans and myself that I’m the best of the best.

8) Outside of the new podcast, what else is new in the life of Jonny Fairplay? How is the family?

I’m a licensed Realtor in the state of Virginia. I’m sober for 11 months. I was baptized on Easter. I’m running my fourth half marathon in 3 weeks. I run 3-10 miles daily. I’m doing DDP Yoga every week. I’m appearing at Oklamania II in Ardmore Oklahoma this Saturday October 7th with Sting, Kevin Nash and many others. I’m doing a church testimonial the following Saturday in Mill Creek Washington with Canyon Creek Church Ministries. Every Wednesday, Conrad Thompson and I are knocking out an awesome new episode of Survival of the Fairest that drops a couple of hours after Survivor airs. Please subscribe and rate us five stars on iTunes! And most importantly I’m a dad to two beautiful daughters, Piper (9 years) and Madilyn (4 months).