While the majority of Survivor productions are shut down all over the world due to the coronavirus pandemic, there is speculation of a potential Survivor UK reboot on the horizon.

A suspicious casting call (first noticed by BothersBar) for a show called “Wilderness” has been put out by Workerbee, a subsidiary of Endemol, which was recently bought by Banijay Group, the global production company that owns the distribution rights to the Survivor format in the UK. 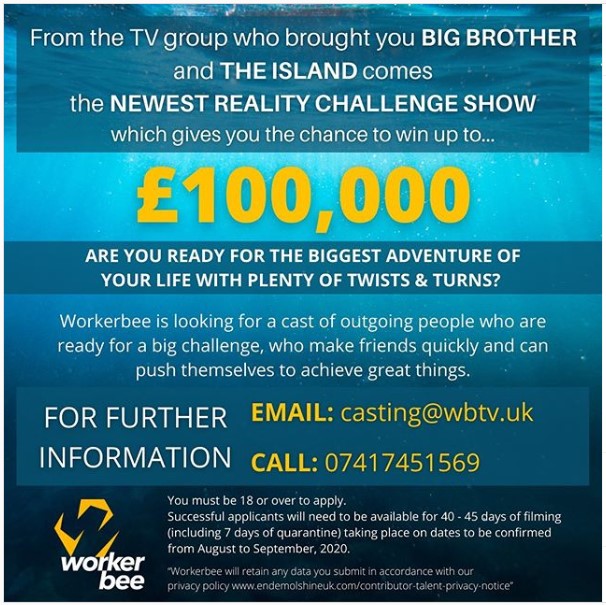 The application form, which can be found over at eTribez, notes that “Wilderness” is merely a “working title” and that they are “unable to reveal the precise nature of this show at this time. It will be disclosed only to successful applicants.”

“Successful applicants will need to be available for 40 to 45 days (including up to 7 days of quarantine) on dates to be confirmed during Aug/Sept 2020 (tbc),” the application continues, which certainly fits a typical Survivor filming schedule.

Where and how this show would film, however, is not mentioned, though it does state that “all filming for the programme will follow the latest government advice on Covid-19.”

You can read the full casting notice below: 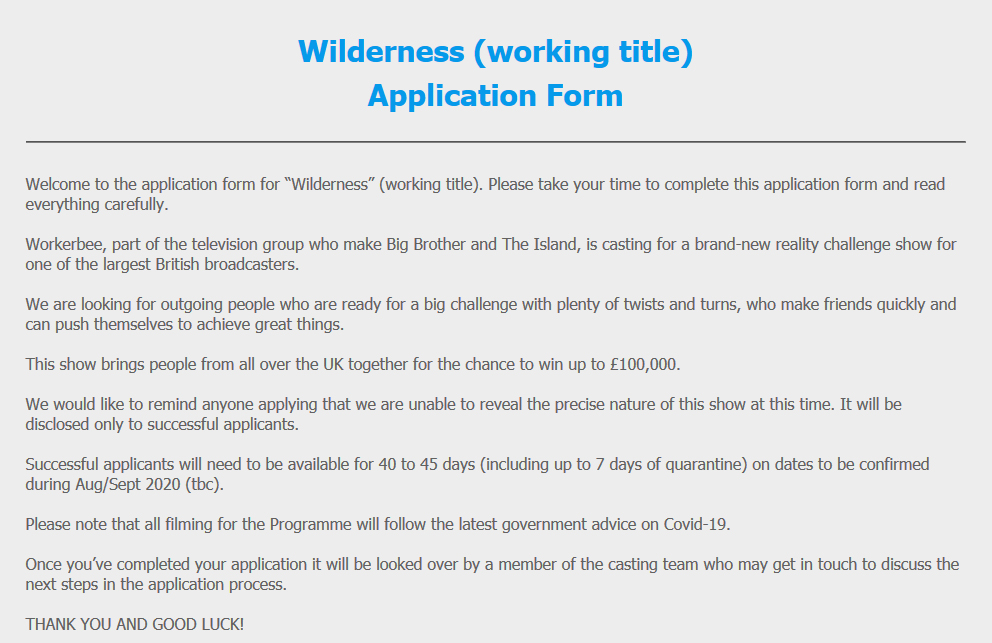 Before fans get too excited, it should be noted that this isn’t the first time something like this has happened. Last year, Banijay UK put out a casting notice for a new competition show called “Adventure Island,” which also sounded suspiciously Survivor-like. Unfortunately, nothing ever came of it.

That said, it is well documented that Banijay Group has been hoping to revive Survivor in the UK since it acquired Castaway Television Productions in 2017. “Having hands on the format means we can polish it and come up with Survivor 2.0, because it needs a refresh,” Banijay Group’s COO Peter Langenberg told Broadcast Now. “It’s a good format—it has to be, it’s in 25 to 30 countries. Look at Love Island, I’m A Celebrity…, The Island—these types of shows work in the UK.”

Two series of Survivor UK aired on the ITV network from 2001 to 2002, but the show never found mass popularity and was overshadowed at the time by Big Brother UK.

Update: Art Sejdiu, who works for a Banijay subsidiary, tweeted that this show is not Survivor. An Endemol employee also told us that Wilderness is not related to the Survivor franchise.

I don’t know what it is (sounds exciting though!) but I do know that It’s not Survivor – sorry! Wish it was!