Following Nicole’s abject failure to do anything interesting in her HOH and Memphis’ departure (which blessedly saved us from having to see the “THE WISE GU—OHHH HOH HOH” recap thing), the houseguests found themselves vassals of a more deserved monarch: King Kaysar himself.

Sorry, did I make that sound like some kind of twist? It’s not. Kaysar came back to explain that the Houseguests would be vying for Final 4 HOH in Knight Moves, the competition that he was famously a part of in BB6. Cody undoubtedly vomited all over while Kaysar was in the house because he hates that he’s called King Kaysar.

The houseguests paraded into the backyard with oohs and ahhs for the elaborate, marble-looking chessboard and large, weathered-looking chess piece statues. Undoubtedly the paragons of strategy that must make up the Final 4 of Big Brother All-Stars would elevate this chess-related HOH competition to new heights, being the gods and goddesses of cunning, tact, and foresight that their placement would imply.

“I see this chessboard,” Enzo began, “and I’m like, I dunno how to play chess!” Ah. Never mind. “All right, houseguests”, Nicole read from a laminated sheet, “it’s time to play chess – not checkers!” somewhere, Jackson Michie spat out his drink.

The gist of the game is similar to the Knight’s Tour puzzle in the game of chess, where the player moves a knight around the board and attempts to visit each square only once. The Houseguests would move around the chessboard as a knight (L-shaped moves only), removing whatever square they landed on from play. When a houseguest was left with nowhere to move to, they would be eliminated.

Everyone set their sights on Christmas, who set herself up first, shoving herself for some reason directly into a corner? And leaving herself with exactly three possible spaces to move to? Two of which Cody immediately covered by standing two moves away from her? “What, dude? You have a whole freakin’ board to go for and you stand a couple spaces away from me? RECKless,” Christmas said in the Diary Room, apparently failing to understand that SHE WAS IN A CORNER AND CODY WAS COVERING MANY OF HER AVENUES OF ESCAPE.

Board games and strategy games happen to be my (Gus’) favorite thing, even though I suck at chess. So let me break down for you why Christmas started off at a severe disadvantage. 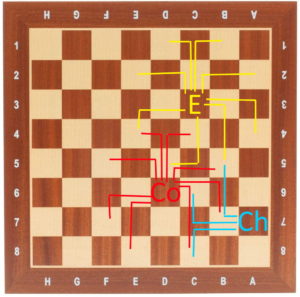 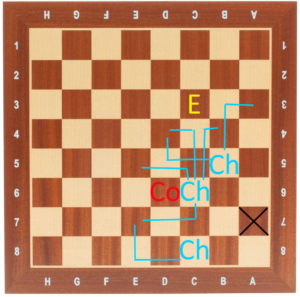 (I’m only pointing out things that might get Christmas out of her corner.)

From ALL POSSIBILITIES of her first move, Christmas has a grand total of TWO possible second moves that get her out of the wall that Enzo and Cody have set up around her: D4 and E5, and only one of her possible first moves, C6, allows her to access both of them simultaneously. Regardless, Enzo and Cody, working in concert, will be able to block further extensions of Christmas’ gameplay at all of these points.

Picking placement first, in this case, really worked against Christmas. If she’d been able to choose her placement based on Enzo and Cody, she might have been able to have a more optimal position. However, going first and stupidly sandwiching herself in a corner left the two Jersey Dudes able to move very effectively. Anyway, moving to C6 is the optimal move for Christmas. Let’s see what she does. 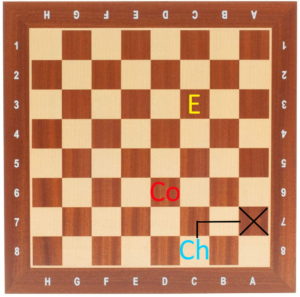 Oh my God, no. After Cody and Enzo’s moves, this is where we find ourselves. 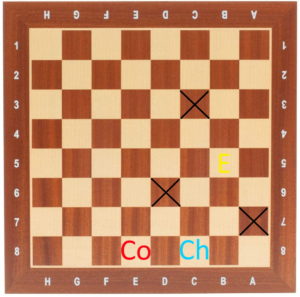 This, actually, is not nearly as bad as it could have been. Enzo and Cody, unsurprisingly, are ALSO both playing like idiots. The optimal plays, by my amateurish reading, would have been: 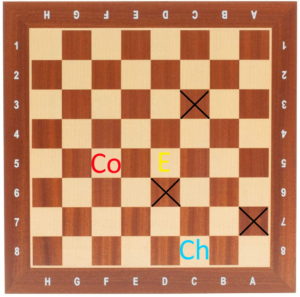 This would have cut off further escapes for Christmas in ALL of her possible extensions: 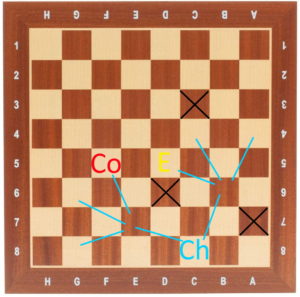 But instead, we have this, which leaves Christmas with several opportunities to back Cody into a corner and actually puts Cody in a terrible spot: 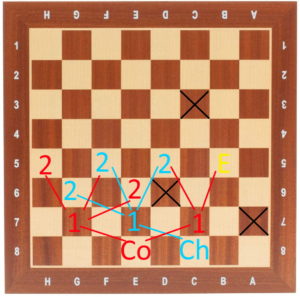 And that’s exactly what started to happen. “I want to move in a way that will eliminate more spaces for Cody and kind of trip him up a little bit,” Christmas said, leading to this board state: 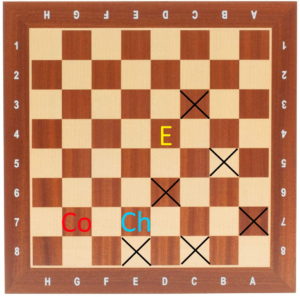 Cody nonsensically whined in the DR about how Enzo’s move was terrible because he “moved away from Christmas,” failing to realize that Enzo had just made a massive difference by hemming Christmas in on her ideal next move: 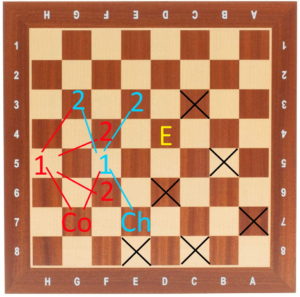 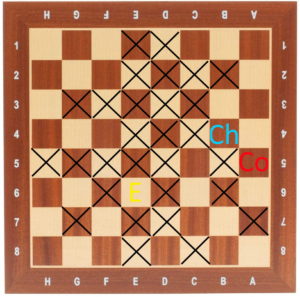 At this point, the game was essentially over; Cody essentially eliminated himself with his last move, and Enzo would have to make a pretty colossal blunder to lose. He had way too much real estate on the left side of the board, and all he had to do to cut Cody and Christmas off was this: 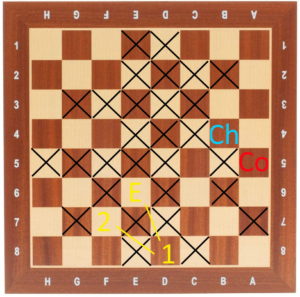 They cut to dramatic commercial after talking about how ENZO WAS A WILD CARD AND CODY NEEDS TO GO ALL OUT TO GET RID OF CHRISTMAS ! HOLY CRAP YOU GUYS ENZO IS GOING ROGUE AND HE ONLY CARES ABOUT HIMSELF; HE’S NOT LOOKING OUT FOR THE GOOD OF THE ALLIANCE!

But, I mean, come on guys, look at the board. Enzo DID work to get rid of Christmas by locking her (and Cody) out of most of the remaining spaces. If they’ve gained distrust for Enzo at this point because he tried to win HOH, that’s just ridiculous.

Anyway, this board state should be a forfeit for everyone but Enzo. He has like eight more moves available to him alone, and Cody and Christmas are fighting over about four. This is the best possible endgame (give or take) for all remaining players: 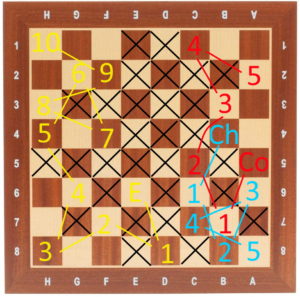 This wasn’t exactly how things played out, as Enzo nearly screwed himself. And Cody sacrificed a couple moves to get rid of Christmas. But yeah, Enzo won HOH, Cody and Nicole pretended to be stressed about it, and Christmas was vaguely hopeful that the Wise Guys alliance would kick in and save her (spoiler alert: it probably won’t).

“BOTH SEASONS IN THE FINAL 3, MAN”, Enzo crowed in the house, ignoring the fact that he’ll probably end up in third on this season if he takes Nicole and Cody to the end. “Enzo wins HOH… watching what happened makes me like so… just MAD. He didn’t even look at Christmas’ moves, he showed his true colors to me, and now I don’t trust Enzo,” Nicole said in the DR, spouting some kind of abject nonsense distrust garbage.

“I felt like Enzo and I were supposed to team up to try to get Christmas out,” Cody said in the DR, ignoring the fact that by walling off half the board, Enzo had, in fact, gotten Christmas out, “and I felt like it turned into a one-man mission.” What is wrong with these people? If you’re upset you didn’t win HOH and aren’t safe, say that. Don’t whine around with this half-assed nonsense about your alliance members betraying you.

Christmas was gobsmacked that Cody was coming after her. “What’s your deal, Cody? Why you so pressed on me?” She said, showing that she has no concept of the dynamics within the house. Enzo entertained the idea of nominating Cody just to force him onto the block before the end of the season. Final 4 HOH is a pretty powerless position, so this is a fair thing to do. Enzo even went as far as to TELL Cody that he was thinking about this because all that matters is Final 4 Veto.

Christmas went to Cody, understanding that he’s got an egregious amount of power in the house, and asked why he was trying to eliminate her from the game. Cody gave some milquetoast garbage answer that came down to “because I wanted to eliminate you.” Great talk. Good strategy.

Oh good lord, we got another “Who wants to see my HOH room?” segment. Enzo had his inflatable cow thing named “Moo-lan,” and the editors put like 45 “moo” sound effects in for that thing because how are we at the Final 4 of Big Brother All-Stars and there’s so little gameplay happening that we’re just looking at pictures of Enzo’s family and laughing at an inflatable cow?

Cody exploded at Enzo because Enzo didn’t blast his way into the right side of the board and sacrifice his standing in the HOH comp to get Christmas out. Enzo, baffled, countered by saying that he did get Christmas out because he roped off half the board. In the DR, outraged, Cody seethed: “Enzo is definitely playin’ for himself at this point.” IT’S FINAL FOUR. WHAT DO YOU EXPECT HIM TO DO, CODY? JUST LAY DOWN AND DIE?

“Why is Nicole now all of a sudden in the [best] spot?” Enzo, bewildered, asked. “During the triple eviction, I voted for Nicole to stay… Part of me wishes that I never kept Nicole because I’m in this conundrum now.” Imagine that, Enzo. Kicking the can down the road until the very end of the game came back to bite you in the butt? WOW.

Cody talked about how small talk is important to making bonds while pretty much blowing Christmas off during some small talk because he doesn’t give a heck about anyone. But he felt obligated to ask Christmas to do her talent show dance because he wanted to illustrate the importance of small talk and none of this matters, so yeah, let’s move on.

“This is taking forever,” Cody said, repeating back to me my thoughts about the season as a whole. Nicole sneezed six times in a row in the backyard, and they set it to orchestral music? Everyone talked about random stuff in the HOH room, and Cody talked about how he doesn’t like his nose, which is silly because I think he has a lovely nose. Three minutes passed and they were still talking about Cody’s nose. Nicole poked Cody with some rotten bananas a few times, and then there was a banana fight.

Enzo and Christmas talked about how important it was for Christmas to win POV and how Enzo should probably nominate Cody to break his perfect game streak. Oh, look, Enzo nominated Christmas and Nicole because he’s a gigantic coward. Cool.