“THE COMMITTEE ALLIANCE OF SIX WAS COMPLETELY DOMINATING,” the pre-episode recap blared. It went on to discuss other things that had happened in past episodes, such as the multiple same-named Final Three deals that Memphis and Enzo made with Cody and Christmas, but honestly, the entire season so far can be summed up in those eight words.

Dr. Will, the BB neighbor, teased an exciting new twist for the upcoming week (no, sadly, it was not, “I’m coming into the house to dunk on this massive alliance.”). The HOH and Veto competitions would be spiced up a little bit with the addition of cash prizes!

Before the HOH competition began, Nicole equivocated about the nature of truth, patting herself on the back for technically kind of sort of having kept her word to Da’Vonne. “I didn’t tell [Da’Vonne] that I voted Ian out of the house because I thought it could cause more waves for me in the game,” she said. “But… I did tell Da’Vonne that I will not vote her out of the house, and I’m glad I kept my word on that,” apparently ignoring the fact that this goodwill will likely hold no water once Da’Vonne learns about the constant and blatant lying to her face about the Ian vote.

Continuing her stalwart journey towards truth and righteousness, Nicole then lied directly to Christmas’s face regarding her hinky vote for Kevin. “I don’t know. Do you think David was one?” Christmas was not buying it. “I really wanted to continue to work with [Nicole],” she confided in the Diary Room, “but… I’ve been really wary of her, and this just sealed the deal.”

Dani considered using her Replay power to allow Memphis, the outgoing HOH, to play in the upcoming HOH comp but feared Kevin winning and targeting her for it. Somehow. “Dani using her power this week decreases the odds of Kevin winning HOH,” Nicole said in the DR. “I don’t think he’s fond of me.” We can’t imagine why. It’s not as though Nicole hasn’t been playing with Kevin at all. It’s not like she’s completely ignored everyone outside of the Committee except as potential jury votes. It’s not as though she voted for Kevin to go home this week. 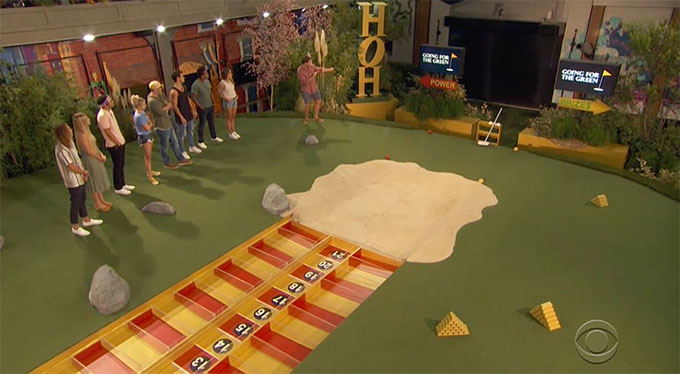 Nicole confided in Cody her belief that Dani not using the power was tantamount to flipping the two of them off. According to Nicole, Kevin would definitely nominate the two of them, so Dani’s move was selfish and horrible and put Nicole and Cody at risk, leaving aside the fact that Kevin probably wouldn’t nominate the two of them. Cody went so far as to refer to it as ‘throwing Nicole under the bus.’

Dani pitched her power to Memphis, who hedged with respect to whether or not she should use it. After an unbelievable amount of deliberation for such an uninteresting thing, Dani used her Replay power to let Memphis play in the HOH competition.

The golf-themed HOH competition finally began. Houseguests would putt golf balls at either an “HOH” green or a “$” green. As in golf, low scores were better. The lowest score on the HOH side would win HOH; the lowest score on the “$” green would win $10,000. Tyler immediately racked up a 3 on the “$” green and whiffed horribly on the HOH green. Nicole eschewed money and whiffed two of three shots at HOH, finishing with a score of 10. Memphis threw the comp (that power sure made the game more interesting).

Finally, it was Kevin’s turn, and he was fired up. “I’m gonna win because I have been ANNOYED by the power that’s dominating this house and causing me to be on the block FOUR TIMES!” he proclaimed. Despite racking up a 5, Kevin decided to push for a better score and wound up whiffing, ending up with no score. Clearly, Dani, Cody, and Nicole’s fears were founded.

The competition continued, with Dani tying Tyler for money. David went for power (commenting in the DR his suspicions that there might be an alliance in the house) and posted an impressive 7. Christmas whiffed while going for power (with her ostensible targets being Dani and Nicole, which I don’t believe for a second). And Enzo came up short on the money. Cody entered into the arena and immediately posted a 6, putting him in the lead. However, that wasn’t good enough for the putting pro as he lined up a second shot and… was interrupted by a commercial so we might have some suspense for the reveal.

The results came in: Tyler and Dani split the money, each receiving $5,000. Tyler was pleased to have some money; Dani was irate that she had to share it. Then it was time to reveal the new HOH. Would it be David, a non-Committee member for the first time in living memory? Or would the steamroll continue? With a score of… 2, Cody brought it home for his dull as paint mega-alliance.

Kevin was concerned. “How did I find myself in this situation?” he said in the DR. David had a similar lament: “I hope he doesn’t target me this week… it sucks not to win.” Enzo had hope for the week yet, having his fingers crossed that Cody would go after “Dani, maybe, uh, Christmas…” which just reminded us once again that Enzo’s not actually part of the Committee.

Dani and Enzo cornered Cody in the HOH bedroom and started suggesting something radical: Christmas as a potential target. According to the two of them, Christmas was irate when she saw that Cody had won. Secretly, Dani had personal concerns that Christmas would come after her later and saw this as a golden opportunity. “If I don’t have to take the shot,” she said in the DR, “why won’t Cody?”

Cody was open to the idea, sharing some concerns that Christmas might come after him or Dani in the near future. “I’m so ready,” Cody said of starting to play Big Brother around week… I don’t even know what week it is anymore, honestly. Eight?

Enzo confided in Cody about the overlapping Wise Guys alliances, hoping that Cody would realize that “Memphis and Christmas are full’a doo-doo, so we hafta go after them at some point… stop goin’ after the Kevins and Davids! Let’s make some moves, yo!” In the moment, Cody seemed to agree, saying, “Yo, yo, we’ll need to probably clip Christmas ASAP,” before displaying his lack of understanding for the term “ASAP” by continuing, “Kevin first, Christmas next, Dani after that.”

While it is exciting that the big alliance might finally fracture, it’s just much too little, much too late. The two fellas reaffirmed their friendship, and Enzo left Cody to ponder who was best to nominate, clearly leaning towards Christmas as a potentially dangerous target.

In a conversation with Nicole, Cody showed that this was more than just hot air. “Kevin. One million percent”, the new HOH said to Nicole about his target. “If Kevin comes down… Christmas.” “THAT’S SO STUPID,” Nicole replied, worried that Cody was just doing Dani’s dirty work, before suggesting that Dani was more dangerous to her than Christmas.

Kevin went to Cody and didn’t mince words. “Cody, what can I do not to be nominated? Please don’t nominate me again”, the five-time nominee said. “There are bigger threats that are in the house, obviously.” Cody was having none of it. Kevin doubled down, threatening to withhold his jury vote from Cody if he sent him home. “Poor you. You gotta be the HOH and put me up and target me. Like, are you kidding me?”

In the DR, Cody was beside himself. “I don’t even know what he’s doing in this game. I’m blown away that he’s still here”, he said about his pointless target. “If that means you won’t vote for me, no problem at all, you won’t vote for me in the jury, there’s plenty of other people I can try to get their votes,” because final votes in the Big Brother house never come down to a one-vote margin.

We could really just copy-paste our Nomination Ceremony paragraph from any number of previous weeks. Kevin and David were nominated, with Cody’s intended target being Kevin. What a shocker. We would say, “maybe the triple eviction will be interesting,” but we know better than to be optimistic this season.