First, we need to apologize for suggesting that this past week might be interesting. We had hope, and clearly, that was our bad. Sorry about that.

With the first of the former winners out the door, the next HOH competition was underway. Stakes were, as always, high. Would the comp be won by a Committee member, or would this week be an interesting one? “The Committee came through,” Tyler rejoiced, ignoring Dani’s having nominated him, “and I lived to fight another day!” For the few remaining players who are not part of the Committee, the HOH comp transpired under a veil of confusion. “I don’t know what just happened,” David said, echoing a common refrain of his throughout the season. “I wanted to create a 4-4 tie, but votes came out 5 to 3.”

The episode then flashed back to David and Ian working on a plan to force a tie. Ian confided in Da’Vonne that David had made a promise. “I got him to agree, and shake on it, to vote me to stay,” the BB14 champion cautiously stated. Unfortunately, Ian’s plan hinged on the belief that Nicole was on his side, something that, despite what the edit and her crocodile tears might imply, is unabashedly untrue.

Allow us a tangent here to mention—in case you haven’t been following the live feeds—that Nicole’s tears during her vote for Ian were completely ingenuine. She had multiple conversations with other members of The Committee about how she’d need to figure out what to say and how to act to convince people she was sad, because… she wasn’t sad at all. Nicole was faking sadness purely to protect her image, likely in light of production’s having informed her in the Diary Room about the massive controversy surrounding her, Dani, and Memphis making fun of Ian’s autism. The fact that CBS allowed her to dictate this narrative is disappointing and enabling at best, and actively harmful at worst.

Back to the flashback, Da’Vonne didn’t believe Ian for a second, fully thinking (for some reason) that David was lying, and she confronted him about it. “Dani breaks the tie,” she said to him, waiting to hear his response. “Boom. I’d rather put it on Dani,” he confirmed back to her. She stared into his soul for about five minutes before going to discuss the plan with Nicole. Da’Vonne, Kevin, and Nicole all had their doubts about David, mostly because he didn’t confide in them that he used his power on himself (because that matters so much), but none of them doubted for a second that Nicole was genuine. Unfortunately for them, as mentioned above, Nicole… was not being honest.

Nicole’s ostensible concerns about forcing a tie were that she didn’t want to put Dani in a bad spot. And that, even though she totally, seriously, really badly wanted to keep Ian, she knew that there wasn’t a fifth vote to keep him… and that Dani wouldn’t have broken a tie in his favor, anyway. While it is likely that Dani would have sent Ian packing nonetheless, and that it might have been bad for Nicole’s game, Nicole’s primary intention in her vote for Ian likely was to keep the Committee together.

Kevin went right to Dani (WHY?!) and informed her that it was likely to be a tie and that David wanted her to have blood on her hands. “I can’t stand that guy. He’s so fake,” Dani whined, outraged at the idea that somebody else would try to play Big Brother, before confirming to Kevin that she’d definitely be voting Tyler out. In the Diary Room, she continued: “I’m gonna flip this around and make David public enemy number one.” She and Nicole made a plan whereby Nicole would vote for Ian, and be blamed for the flip vote, thereby according swift justice to the horrible monster who would have the barefaced audacity and sheer unmitigated gall to punish the HOH who nominated him and, like, all of his allies.

With the 11-minute flashback over, we were back at the HOH competition. Dani, in addressing why she didn’t use her Replay power, which would have allowed her to take part in the comp, thought about how little she wanted to be noticed—because heaven knows that week SEVEN is, again, way too early to be doing things in the game of Big Brother.

David had an early lead, much to the absolute horror of Dani. Kevin hoped to win and nominate people who hadn’t ever been nominated before. Cody wanted to win to continue the unbelievably dull steamroll. Nicole, clearly still emotionally devastated at the loss of her bestest-friend-foreverest, couldn’t figure the puzzle out at all. Tyler was very concerned about having received votes from the people who weren’t in his alliance and was looking for payback.

Ultimately, as Reddit and Twitter had been ironically predicting in the two hours that feeds were down, Memphis won HOH. His biggest plan for how to shake things up? “Evict someone that’s been on my radar for a while now.” How exciting. 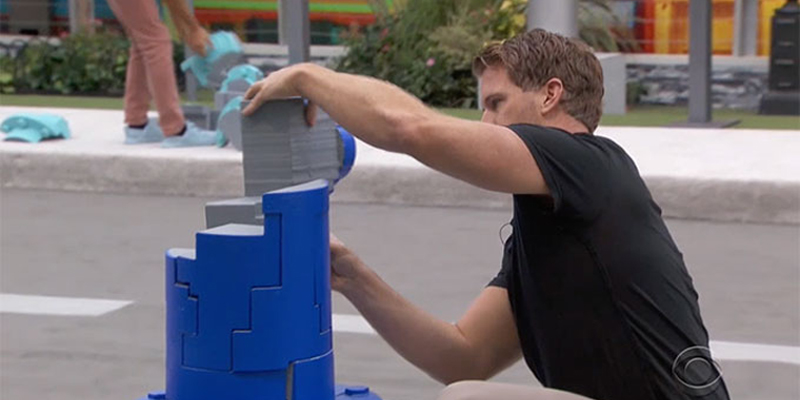 Back in the house, Da’Vonne wandered into the bedroom staring daggers at Nicole… but the daggers weren’t for her. “I’m gonna kill him,” she said. “I’m gonna ****ing kill him.” Nicole wasted no time in jumping on the Dump On David train, before wandering into the storage room with Dani and dancing in celebration of a plan gone great, or something. “I don’t know how to act,” she said, to which Dani replied, “upset!” “Oh my God, Dani, that was a crazy move,” Nicole continued, speaking about… just lying about her vote. The two expanded their plan to dump all of the shame on David, because, again, how DARE he try to make a game move.

There was a very uncomfortable conversation in the kitchen where David repeatedly professed his innocence to Da’Vonne, and she agreed with him time and time again. Kevin came in and told him not to bring it up, clearly also not believing him. Faced with nothing but stonewalling, David exploded, storming out of the kitchen, screaming, “THAT’S why I try to play this game the right way,” following a string of profanity that made his preceding sentence difficult to understand.

Dani, in the Diary Room, reveled in David’s discomfort. “My plan is working better than I thought it would.” David’s anger continued unabated in the bathroom, where he cursed further and lamented the fact that everyone thinks he lied when he didn’t. As he entered the showmance room to cool off, “Da’vonne does not trust me… us being visibly upset really just shows the cards. When things don’t work out, it just comes back to me in a negative way. It’s not fair. It’s not fair.” Meanwhile, Da’Vonne continued crying in the DR about how “all of that was for nothing” and confided in Kevin that “[David’s] going crazy. He’s spiraling.”

In the bedroom, David and Kevin spoke about David’s anger, which David clearly regretted. “I blew up. I don’t blow up like that… I voted the way we said… all of a sudden the votes don’t go that way, who’s it come back to? Me. I don’t like to explode like that because now I look like a dumbass.” David’s read on the move was impeccable—Nicole flipped and blamed it on Kevin, Da’Vonne, and David. Kevin gave this “like a 5% chance”, in the DR. Why? I don’t know. Whatever.

In the most bizarre mood reversal ever, we cut to Cody making tacos for everyone and waiting to have any until everyone else had eaten. He was cut short by Memphis calling everyone to the living room for the Have-Not ceremony. The houseguests wolfed down their tacos in anticipation of being named a Have-Not. First up was Da’Vonne, who picked Christmas. David picked Cody, who was beyond irate at not getting to eat a taco. Similarly, Christmas was incensed with Da’Vonne for not picking Kevin because she had overheard a conversation where Da’Vonne joked about nominating Kevin. “I AM FURIOUS,” Christmas said. “So now I’m suddenly a Have-Not because I put you on the block?” she ranted, apparently not understanding that turnabout is fair play.

Christmas, Dani, and Nicole spoke in the bathtub about how they wanted a woman to win All-Stars. Nicole fell out of the tub. It was hilarious, apparently, because they showed it three times.

Dani and Kevin discussed who they thought Memphis might nominate. Kevin expected “Me, David, Nicole or Dani,” clearly having no perception of the large alliance in the house. David came in and asked Da’Vonne if she wanted to talk about what had happened. She gave him the cold shoulder, then walked out. At this point, David gave up and applauded Nicole and Dani for outplaying him and shattering Da’Vonne’s trust in him.

Memphis and David sat down in the HOH bedroom. In the DR, Memphis mentioned his dastardly plan—backdooring David. He offered David a deal: refuse to play Veto this week, then I keep you off the block. Inside, Memphis was cackling, foreseeing a future where David wins Veto, doesn’t use it, and is put up. Let us remind you that David has only won the Disruptor power, so the likelihood that he would win Veto was almost nonexistent. David opted to go with the plan, seeking some alliance over no alliance and walked out. “AND THAT’S A WRAP!” Memphis proclaimed, apparently implying that this was some kind of cinematic master plan… or maybe just that he was acting.

At the nomination ceremony, Memphis made a huge, game-changing move, nominating Cody and Nico — Nah, just kidding. He put up Kevin and Da’Vonne because Da’Vonne played the Veto on Kevin, and Memphis reiterated in the DR that his aim is to backdoor David. *Snore*