Last Wednesday, Inside Survivor contributor Josh Forward attended the official launch party in Sydney for the new Australian Survivor. You can read his report below.

It’s been a long wait for Australian Survivor fans for the first se—well the 2002 season was so bad it doesn’t count. The first season apart from the one in 200—okay, well the Celebrity Survivor season in 2006 CERTAINLY doesn’t count. The first real, fully backed, season of Survivor done in Australia with Australian contestants, produced in Australia. On Friday 13 May, the 24 contestants flew off to Samoa to begin the game.

Much mystery surrounds what the format will be but at the official launch on Wednesday night by Channel 10, some smoke was cleared. Aussie host Jonathan Lapaglia, who in certain photos looks like Jeff Probst stepped through a cloning machine, greeted the audience and treated us to a sneak peak of the season to come. Sound bites from the ambitious 24 contestants played to the 200+ audience of celebrities, journalists, and television executives. A former soldier, a criminal prosecutor, and a teacher who professes to be a student of the game were just some of the hints. Lapaglia revealed that it was a mix of superfans, and some who had never even seen an episode. He seemed to like the idea of a rookie outplaying a superfan, but in all likelihood, he’ll be snuffing the torch of an eliminated rookie by an immunity idol they didn’t know existed. 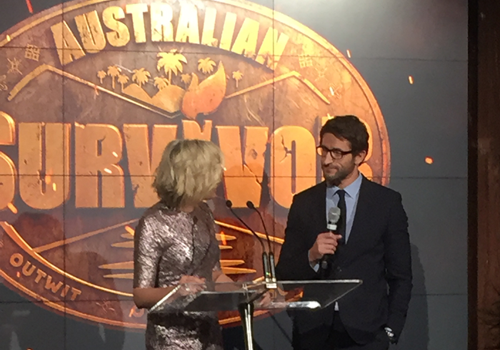 One of the biggest reveals of the night that perhaps slipped out by mistake by Lapaglia was his casual reference to the contestants living on the island for 55 days. If this is true, this will be one of the longest games of any Survivor iteration globally, but might explain the large 24 person cast. That’s a lot of tribal councils. This news has yet to be confirmed through any official channels, but the contestants should prepare themselves for a hard slog.

One thing is for certain and strongly emphasized, Channel 10 are taking this opportunity very seriously and are committed to doing it right. They want it to become a ratings staple like it is on CBS in America. It was repeatedly mentioned at the launch that the American format would be followed closely, with equally high production values. Here’s hoping that they nail it, paving the way for many many seasons to come.

Filming for Australian Survivor will start later this month. An official airdate has yet to be announced.

Josh is a writer and Survivor fanatic from Sydney, Australia.