As the first week of All-Stars comes to a close, there’s plenty to reflect on. Australian Survivor’s choice to create an all returnee season for its fifth run seemed to be somewhat of a stretch to pull off. Even the US series, which was in its heyday and a ratings crushing monster, waited until season 8 to field an all returnee cast. An All-Stars season brings with it a certain amount of expectations, and I think viewers expect this cast to burst off the screen immediately. But despite three feature-length episodes giving ample opportunity for each castaway to get a moment in the sun, there are still many hiding in the shadows. It’s not that these opening episodes have been bad; they just haven’t been electric. This week has been about seeing if the juice (the season) has been worth the squeeze (casting from a pool of only four seasons).

On the positive side, the first two castaways voted off have underlined this cast’s commitment to play. The elimination of Jericho and Shane saw two highly likeable castaways dispatched one after another primarily because they were previous winners. And the loss of Shane, in particular, really seemed to bring the lust for revenge out of certain castaways. Lydia, the blindsided victim of Shane’s strategy in 2018, and Harry had no reservations in gunning for the highly-decorated former Olympian. Retribution and settling past ills have been recurring themes across these three episodes. For the most part, these All-Star castaways seem to crave one or two things: redemption and revenge.

It seems that every castaway who ever misplayed an idol (including those who didn’t play it at all) is on this season, and they all want to find another idol to play correctly. For some, this is causing itchy feet: a sense of pressure to play the idol, whether it’s correctly or not. Others want to accomplish more than they did before. Take Sharn, who wants desperately to win the game after losing by one vote in Champions vs. Contenders I. Then there’s Shonee, who wants to show off the best social game ever. Zach wants just one female in Australia not to hate him (hey, that’d be brogress). Channel 10 wants the biggest Tribal Council ever! And some castaways just want to get a confessional this season!

Then there are a handful of castaways who care less about redemption are merely out for the sweet taste of revenge. This mainly involves battling to take down another castaway on the show, just as we saw this week with Lydia seeking vengeance on Shane, and how David prepared to risk his own game to take out his old foe Daisy. This season is already setting itself up to be a series of showdowns. The tribes have been formed to make sure adversaries are being forced together in these early days, and previous alliances are reincarnated. But which will be the path to victory—will it be a desire to evolve within the limits of the game or a want to outplay someone who has wronged you before?

The Previously on Survivor segment called Makuta, the “greatest social players of the game paired with elite athletes.” And given that Makuta has won three Reward and two Immunity challenges now, it’s hard to disagree. By all accounts, this tribe seems to be cruising through this early part of the game. 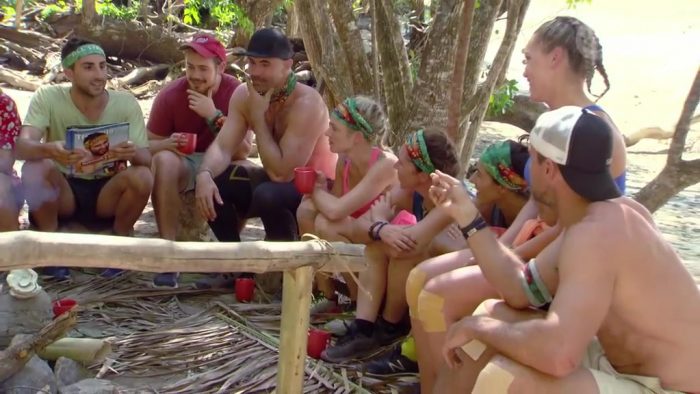 Meanwhile, Vacama is divided into the “beautiful” and the “real beautiful” with David leading a majority of AK, Locky, Brooke, Flick, Phoebe, and Daisy against Mat’s crew of Moana, Jacqui, and Tarzan. While Locky is playing The Bachelor with the single ladies on his tribe, Mat is determined to keep all of his four for another round. In Mat’s original season, he earned the nickname “The Godfather,” and I must admit it mystified me a bit. Mat was clearly the head of his alliance and had the air of a man who was listened to; that said, he never seemed to flex his strategic muscles beyond keeping his alliance in line. However, this episode was the advent of Mat the Strategist.

Some people are going to call this David’s move, but I think it’s just as much Mat’s. From the very beginning of the episode, the former rugby star is gathering the means to protect his alliance of four. His plan consists of two main parts: getting the Tribal idol from Henry and forming a partnership with David. The first part of the plan is tricky, seeing as it involves communicating with a member of the opposite tribe. During the Reward challenge, Mat grabs Henry’s ear to ask for the idol if Vacama loses Immunity. He asks for it twice on screen and who knows how many times off-screen. Henry seems reluctant to give it up, but once he knows it’s useless to him, he not-so-subtly hands it over to Mat in the post-Immunity challenge revelry. 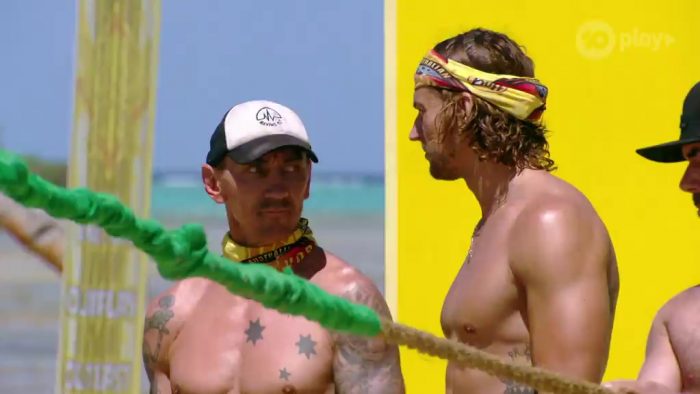 The second part of Mat’s plan comes when David approaches him for a partnership of mutual benefit. The alliance, which is reminiscent of the short-lived Exile Island alliance in Survivor: Tocantins, will see two opposing alliance leaders play their groups off one another while keeping one another safe. Mat can appreciate that David is as trustworthy as the Devil, but he can’t deny it’s a good argument. David plays to Mat’s role as a leader and protector to try and buy his agreement. And while Mat is hesitant to work with David, he ultimately takes the partnership to a whole new level when he decides to leverage his new partner in crime with his idol. Mat just wants his four to stay, and David makes the deal once he realises he can take out Daisy and keep his hands clean.

A lot of these castaways were brought back for their willingness to throw caution to the wind and pull big moves. David was certainly one of these, with his past actions including making a fake idol to pass off to an enemy. That David is willing to take out a member of his own alliance in the name of revenge, at such an early stage of the game, is hardly surprising. Nick said it best in episode one—nobody who came out the gate swinging has won Australian Survivor. The previous winners have always laid low in the beginning and waited for the right moment to strike. While this bold play was done covertly, it is still a big risk that could easily blow up in David’s face sooner or later.

For now, though, David carries out his part of the plan to perfection. The Magnificent Seven, as Mat dubbed them, know that Mat has an idol (thanks to Henry’s clumsy handoff and AK’s watchful gaze) and prioritise giving out a fake target to the leader of the minority foursome. Knowing that Mat has an idol, the seven want him to waste it while they take out their desired target. They choose Moana, Mat’s tightest ally, but after three different people approach Mat to “leak” this fake target, he starts to get his suspicions that all is not as it seems. His concerns are confirmed when David whispers the real target (Jacqui) to him across the campfire, dangerously close to the rest of his tribemates. 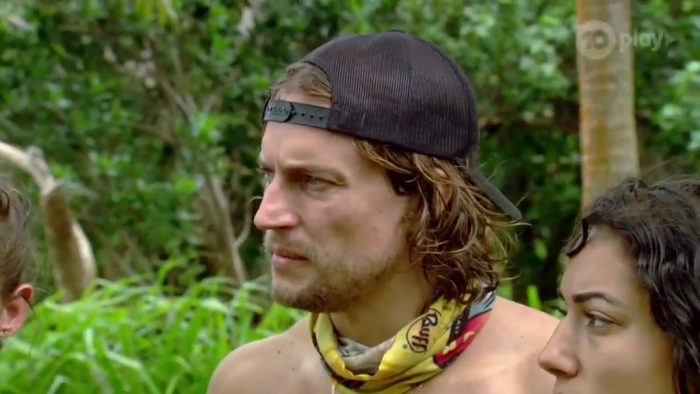 The only fly in the ointment is the next phase of the great Vacama idol hunt. Brooke and Locky spot Tarzan looking searching through trees and decide they had better start looking too. In the magic of television, it appears that Brooke and Locky wander up to the correct place to uncover the idol only a few moments later. Feeling ecstatic and confident, Brooke shares the news of her idol with the Magnificent Seven. David is simultaneously terrified that it could ruin his plan, terrified that someone who other than him has control of an idol, and excited to be a member of a majority that has an idol. In the last moments of pre-Tribal strategy, David worries that his allies could go rogue and play an idol for Daisy, so he pleads for Mat to convince everyone that he is the target.

Who knew that Mat Rodgers had acting chops? I thought that the pressure of a blindside could turn Mat a bit wooden, but he puts on a great show at Tribal. He makes comments about David being deceptive and leading without caring for others. He leans over and pleads with Locky to vote David off. He even gets into a back and forth with David about the game. The votes are cast, and Mat teases playing the idol for himself, only to turn around and announce he is using it on Jacqui, telling his tribe that he doesn’t believe they’re really targeting Moana. There’s panic as the majority realize Mat played his idol correctly, and they need to cover their own butts. After some confusion and encouragement from David and AK, Brooke plays her newly found idol for the Golden God. 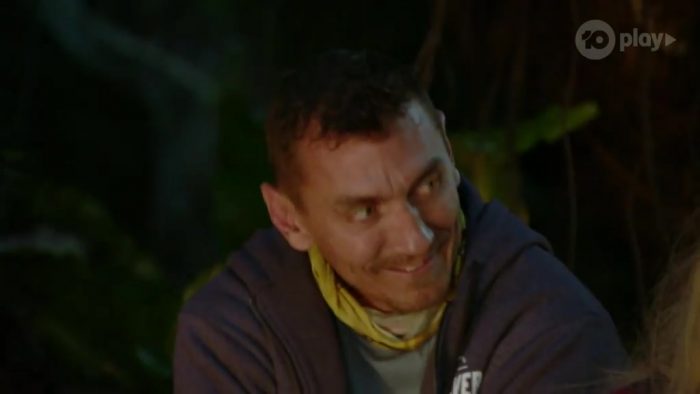 The votes come in. 5 votes for Jacqui—do not count. 2 votes for Moana—I have no idea what the purpose of these two votes were, but they were cast, and maybe it will make more sense later. 4 votes for Daisy. Done and dusted. The group of seven seem flabbergasted… including David, who puts on the most over-the-top “shocked” face. I can only imagine what the scene back at camp will be when they realise someone has betrayed them. Who will they suspect? Could this break up their alliance now that a ripple of mistrust has formed? Has David already got himself into a sticky situation on only Day 8?

This might’ve been some of the more complex gameplay so far this season, but it isn’t exactly the most complex gameplay imaginable. Sure, this past Tribal with the fake leaked target and the real leaked target and the coming together of two unlikely allies is entertaining. However, it doesn’t get close to the real “biggest Tribal Council ever” (I still think it goes to Mat’s blindside where Benji convinced Sharn not to save Mat on the fly). And there are many more convoluted and complex moves Mat could’ve made to take advantage of David in this situation (such as voting off someone who isn’t Daisy), but he didn’t, and their plan went off without a hitch.

David is a cocky player, and I’d have loved to see him tripped up so early in the season, but I also think that Mat earning and keeping his trust at this point is probably in his best interest. Mat is still in the minority following the vote and he will need some help to claw forward in the game. Still, Australian Survivor does love its hyperbole, and I’m sure we’ll get another “biggest Tribal Council/betrayal/blindside ever” before the season is through. 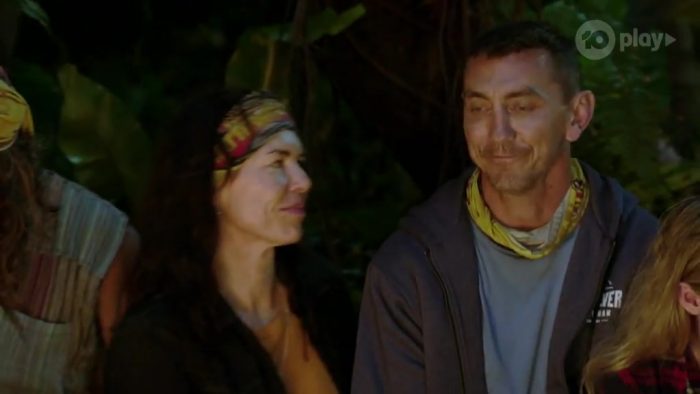 The expectations for Australian Survivor’s first returnee season were always going to be high, all the more so titling it All-Stars. Australian Survivor is known for having strong characters, story arcs that stretch across 55 days and celebrating the underdog winner (who often scraps from the bottom of the totem pole to glory through many confessionals and challenges). While the challenges have more than exceeded my expectations, the gameplay so far has been middling. I haven’t given up on the season yet. As more castaways leave the game, I think others will find their strategic groove. These early alliances will lead to the rise and fall of champions because, as every one of the remaining castaways knows, there is only one Sole Survivor, and if they want it to be them, then they need to be prepared to fight for it.