Within Survivor, there are patterns. The show has been airing for two decades, so it’s hardly surprising. Some of the patterns are simple: reward, immunity, Tribal, repeat. Some are a little more complicated: the first person voted out at merge is usually a big threat. That being said, due to the show’s longevity and the natural patterns that have arisen over time, there are now certain expectations etched into the game about how its structure and strategy are used throughout different phases of the season.

As castaways anticipate a change in the game—such as a swap, or in the case of this episode, the merge—the atmosphere becomes palpably tense. For the remaining castaways, the merge is looms large. The merge is a landmark in the game and the most significant shift structure-wise: the players are no longer balancing the responsibilities of a tribe but become individuals fighting only for themselves. When a castaway is voted off, they no longer disappear away from the island never to be seen again (until the reunion): they may sit on the jury and ultimately vote for or against you. Voting off the wrong person could mean they turn a whole jury against you. Anyone who is going to cause you major problems in the large group or who would be apt to lead a crusade against you needs to go before it’s too late. As David put it—time to tie up loose ends. 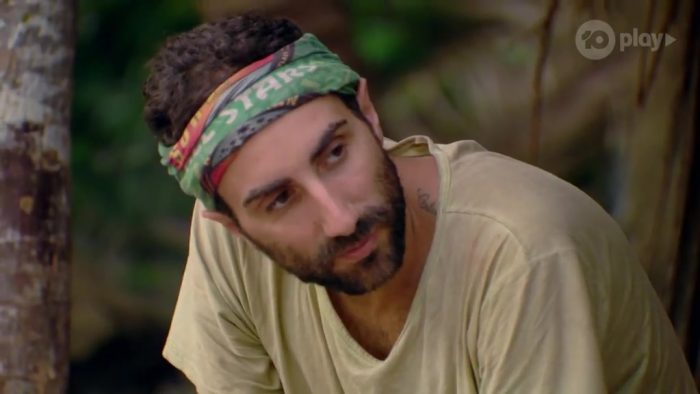 And what a way to put a bow on the pre-merge. Nick was a personal favourite of mine, both on and off-screen. Although I was somewhat flummoxed with his gameplay during his first season, Nick’s passion for Survivor as a game and a TV show was evident to all who watched him. As a frequent narrator throughout both his seasons, he was able to perceive the game around him and turn it into a story told with comedy and charm. After his first appearance, Nick went on to podcast about Australian Survivor for RHAP, stopping only when he started a family. Nick entered this All-Stars season with a new, restrained approach to the game but the same gleeful persona. He was my winner pick for the season, and I’m disappointed to see him go, especially so close to the merge.

The game shifts in more ways than just how the castaways are grouped when the merge hits. The way a “threat” is defined also changes once the game becomes individual. Physically strong castaways who were previously an asset to their tribe in challenges become instant threats that need to be voted out when the chance arises lest they go on a run of immunity wins. Social players who were scraping by to prove themselves worthwhile to their alliances are suddenly in their element, forming bonds that can help them advance. Dominant players who helped knit alliances together are players who need to be cut off at the knees. Island “marriages” become dangerous duos who need to be split up to lessen the power a pair of votes can represent. The game is flipped entirely on its head, and even the best-laid plans can be shaken up in the scramble to get to Final Tribal Council. 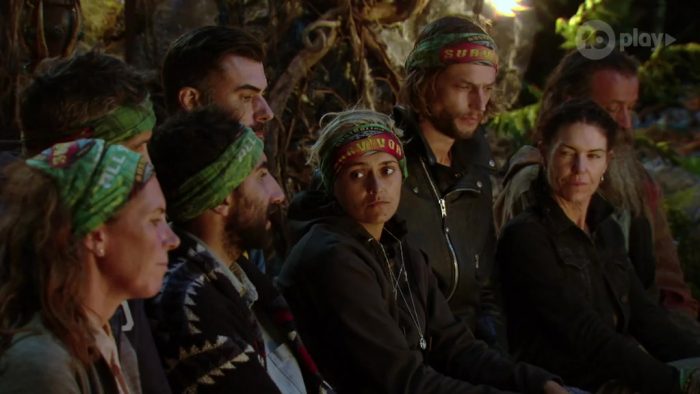 Going into the merge, the tribes are 5 versus 7. Multiple Mokuta members voiced their opinion that whichever 7 moved through the vote would be a solid group in the 12, and indeed, the reasoning behind Nick’s boot was to solidify trust within the remaining group. David, the charismatic leader who seems to amass a following no matter where he wanders, was using the vote as a chance to test Sharn’s loyalty. Sharn has been playing both sides (and getting away with it), but with the impending shakeup, it became vital for her to have both feet planted in a solid group.

Meanwhile, Dirty Harry had the chance to effectively save Nick with his Tribal Shutdown power, but he decided to withhold it. Harry has spoken more than once about the importance of getting to the merge with his original Little Rascals alliance, but he let his ally slip through his fingers when he refused to give up the advantage to save him. Initially, Harry seemed intent on keeping the exact contents of his advantage secret in order to wield the power of fear, but a moment of indecision led him to sharing the advantage to the entire tribe post-challenge, and he was dissuaded from passing it over to Nick. Now, Harry, who seemed to rely on the prospect of the Little Rascals reuniting at the merge, has an extra obstacle to overcome.

We’ve already seen the rollercoaster of Survivor begin to take hold: the castaways vacillate between elation and paranoia with every vote, and things only become more intense with the merge’s arrival. Will the Mokuta 7 stick together? In a group of 7, someone has to be the bottom of the ladder (and I’m guessing it’s Tarzan), but will loyalty be more important than trying to find a leg up a bit higher in the game? Will the five Vacama tribe members find a way to stay in the game, or are they fated to be picked off one by one? There are still lots of power players left, and most of them are hungry for a big move. With people like Locky talking about chaos, and under the radar leaders like Mo no longer able to hide from the spotlight, anything can happen in this game.

News23 Jun 2022
Previous
« The Dice Have Spoken – The Dungeons & Dragons Classes of Australian Survivor: All Stars
Next
Episode 3 – The Edit Bay »