Australian Survivor sure loves its flashy advertising; last week, it was “the best season ever,” and tonight it was the “shock elimination.” We’re still in the pre-merge, and this show is delivering punch after punch. These past few episodes have wrung every drop of tension out of the Janine and Harry rivalry–even more than I thought possible. And the series is still getting mileage from the Champions versus Contenders theme, even though the tribes have been swapped for several episodes now.

For every fierce rivalry in this game, there is also pure love. The bromance between Luke and David and the trust between the Champion women have nothing on the true, true love between John and a Mexican parma. Every opportunity he has had to name a desired reward before a challenge, the mulleted one has requested a parma. The reunion between John and his most loved food is the highpoint of the episode, which otherwise focuses on Harry and his fight to last another day.

John wins his parma in one of the more terrifying Reward Challenges I’ve ever seen. Using the Tower of Terrors once more, each castaway dons a blindfold and shuffles out to the end of a plank. There, they retrieve a ring hanging from a rope and then launch themselves into the ocean. Once in the water, they can remove their blindfold and swim to a floating ledge to try and throw their ring onto a hook. The Champions tribe is dominant and win handily.

The Champions are given a chance to take one of the Contenders with them on the reward. Shaun nominates Harry, hoping he will tell them all the secrets from his tribe. Harry is more than happy to share, and Andy starts thinking it might be in the Contenders best interests to throw the upcoming Immunity Challenge and vote one of David or Luke out of the game, thereby giving the former Contenders the numbers advantage.

There are specific well-established alliances in this game. The three Champion women (Abbey, Janine & Pia) have a sisterhood which positions them well. David and Luke formed a fast friendship in the early days of the game. There is also a group of Contenders who seem prepared to stick together through thick and thin–Shaun, Daisy, and John have joined with Andy and Baden before. The current Contenders tribe has the dominant ex-Champions alliance in a group of five, with Matt and Harry on the outside 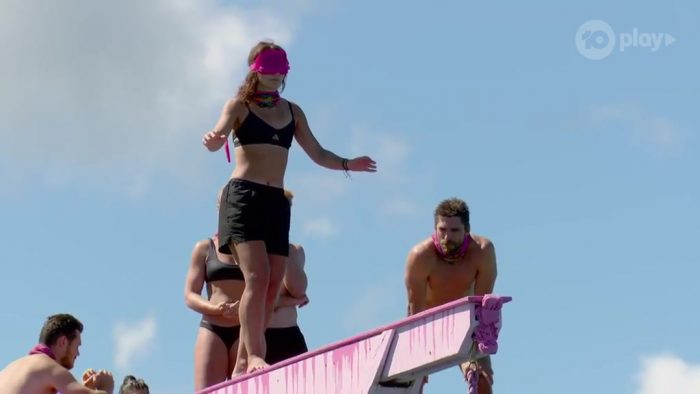 Harry, after exposing his lies and trying on a jerk persona, is in a bad place, and he knows it. His saving grace at the previous Tribal Council was an idol. It saved his life but cost him an ally. With only one ally remaining (challenge enthusiast Matt), Harry begins the episode with an idol hunt. Ross tails him through the scrub trying to impede his search. It turns out Simon ‘could’ve nabbed a clue hidden by the water hole, but Harry shakes Ross and snipes the clue. The idol is hidden in plain sight at camp, nestled in the ‘shelter’s roof. This is the sixth idol in the game (seventh if you include Shaun’s fake idol) and we’re only halfway through the season. At this rate, everybody will get an idol! Everybody loves an underdog using an idol at the perfect moment, but it gets a bit tired when they seem to instantly replace themselves in the game.

The Immunity Challenge sees Andy attempting to throw it along with slippery slides and the castaways hammering through targets. The challenge ends in a showdown of puzzles. Even with Andy trying to hinder any progress Baden makes on the puzzle, they manage to beat the Contenders, sending them back to their second Tribal Council in a row.

There have been a few episodes now where certain castaways use their status as a fan of the game (or even an “ultra-fan”) to justify making certain moves. Andy reminds the cameras once again that he is aiming to play the most strategically dominant game of all time. His current move is to throw the challenge (which he did unsuccessfully and tipped off Luke and David in the process) as part of this strategy. Andy has been strategically driven, but it is yet to be fruitful. The last time the Champions went to Tribal, he intended to orchestrate Daisy’s demise but ended up losing one of his own allies when it backfired. 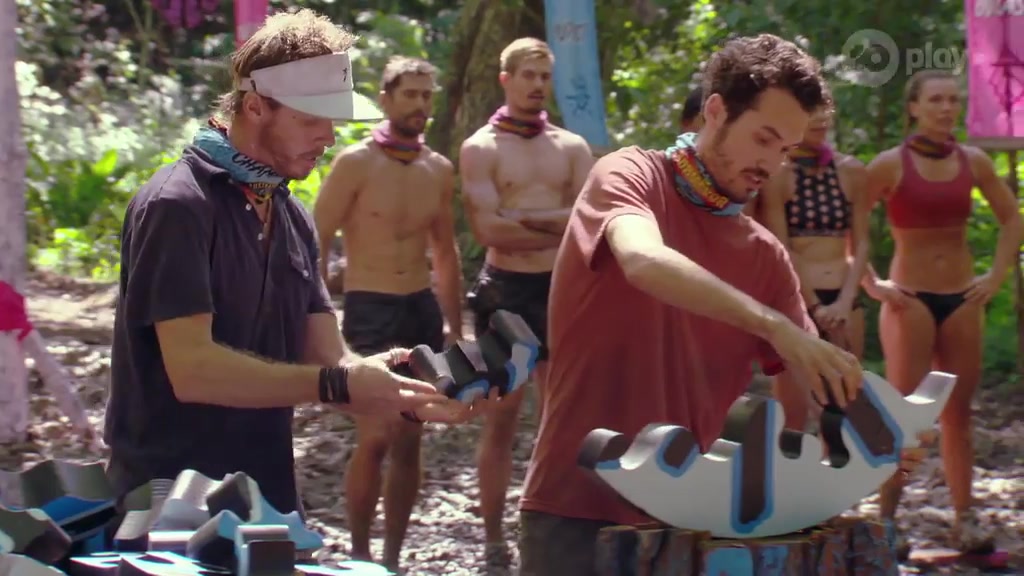 Likewise, Harry appears to lean on his status as a fan as he muddles his way through the game. In some ways, Survivor can be played using Occam’s Razor. The simplest plan is often the best. In this case, the ex-Champs believe Harry doesn’t have an idol, and they want to put all their votes on him. It’s not a particularly revolutionary plan, so Harry could probably predict it’s what might happen. Instead of keeping quiet, planting his and Matt’s vote on their castaway of choice and getting them out via an idol play, Harry starts scheming. He thinks Janine has an idol and so he wants to take out one of her “family” – Pia. Harry wants to flip the ex-Champ boys to vote with him. He approaches Simon and Ross, explaining the strategic benefit of aligning themselves together. To seal the deal, Harry tries to draw Ross in with some crocodile tears and a sob story. Ross does feel bad for Harry, but it isn’t clear if he’s going to flip sides for the vote.

Tribal Council comes, and Jonathan starts his questioning. Harry discusses the strengths of his fellow castaways, in particular, Janine, who refuses to take credit for being a good player. Matt expresses his frustration that he doesn’t have control of his own fate–he is at the mercy of the ex-Champions. Harry continues trying to sway Simon and Ross to his side. He offers both boys a better place in his alliance, an idol once he finds it and, perhaps most importantly to Ross, his socks. I’ve seen a lot on Survivor, but I’ve never seen someone use socks as part of a strategic deal. 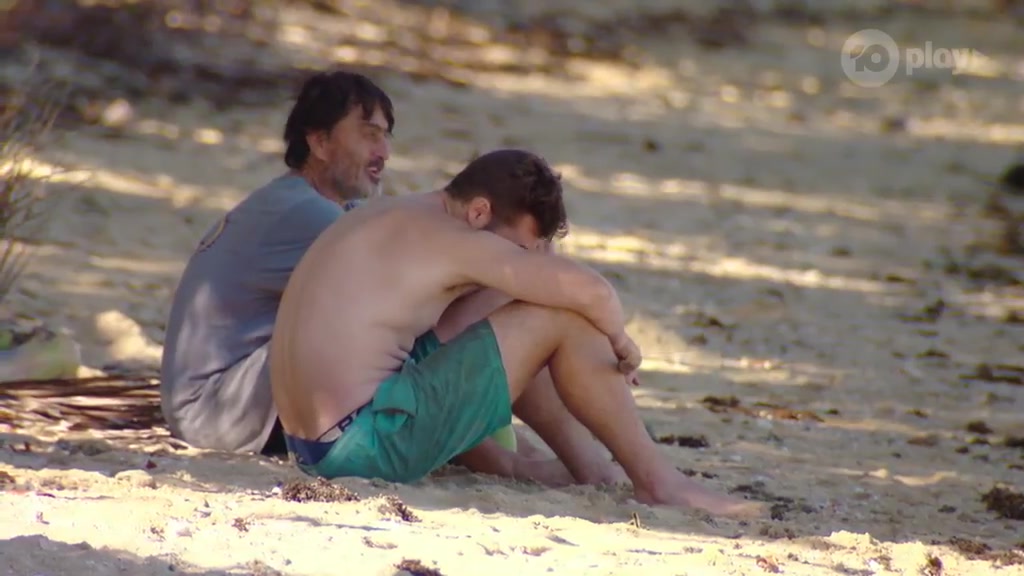 Ross and Simon look like they’re listening to what he has to say. Jonathan asks for the votes. Once all have been cast, he asks for idols. Harry produces his. In response, Janine plays hers. Everyone at home pulls a face wishing that she’d played it for Pia. But it doesn’t end up being an issue–there are 3 votes Harry, 2 votes Matt and 2 votes Pia. Turns out the Champs split their own votes to ensure one of the boys went home. With Harry’s votes negated by the idol, a revote between Matt and Pia occurs. Once one vote comes back for Pia, Matt is the 11th castaway sent home.

Matt hasn’t been much of a game player this season but rather someone passionate about winning challenges. He was always ready to coach his tribe through each challenge (very loudly) and took each loss personally. I alternately loved and hated him, was fascinated by his eyebrows and wondered how I would feel if I was ever in his history class. With only 13 castaways remaining, the merge must be drawing near, and the battle between Champs and Contenders will reignite.

Alice lives in Melbourne, Australia. She's a nurse and midwife by day and a Survivor (and competition reality-tv show) geek by night. Her other interests include enjoying her city's coffee culture, planning trips she may or may not go on, and hanging out with her friends and family.