Throughout its thirty seasons, Survivor has taken place in some of the most beautiful environments in the world. Though the past six seasons have been solely split between beach-island locales in Nicaragua and the Philippines, Survivor has been no stranger to a diverse collection of brutal settings in the past, many of which assisted in the elimination of various players due to illness or injury.

With information out in the open about the number of contestants evacuated from Cambodia during the filming of Survivor: Kaôh Rōng – Brawn vs. Brains vs. Beauty 2, the season being aired following Second Chance, I cannot help but consider how impactful an evacuation is on the outcome of the game.

Of course, not every evacuation has an immediate and devastating impact on the results of a season. Samoa’s Mike Borassi, evacuated after his blood pressure fell extremely low, was only the second person eliminated from his season. Kourtney Moon, from One World, injured her wrist badly in the first challenge of the season, resulting in the earliest evacuation in the game to date. There are no real indications of how these players may have impacted their seasons, simply due to a lack of longevity.

Just to have them fresh in our minds, here is the list of official medical evacuations from the game: 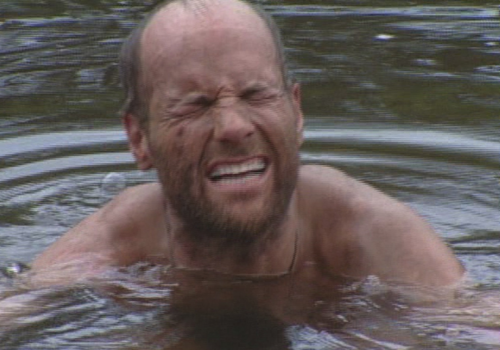 Survivor: The Australian Outback – On Day 17, Michael Skupin inhales smoke while tending the campfire, causing him to pass out and collapse into it, resulting in badly burnt hands and an airlift out of the game.

Survivor: Panama – Exile Island – On Day 25, Bruce Kanegai called for medical attention when his stomach pains became too severe. It turned out that Bruce’s urinary bladder and tract had been blocked. After an evacuation and treatment, he was well enough to participate as a member of the jury.

Survivor: Micronesia – Fans vs. Favorites – On Day 15, Jonathan Penner’s punctured knee became badly infected enough to put him at risk of losing his leg without treatment. On Day 31, a cut on James Clement’s finger began concerning the medical team. Warning him of it growing severely infected and putting him at risk for serious damage to his joints, James was removed from the game.

Survivor: Tocantins – On Day 20, Joe Dowdle’s leg had become notably infected leading to a medical team examination. With concerns of the infection leading to a possible loss of the leg or worse, death, Joe was evacuated from the game. 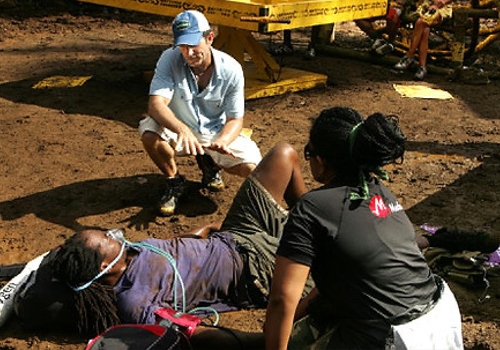 Survivor: Samoa – On Day 5, after taking multiple hard hits in the controversial challenge known as “Schmergen Brawl,” Mike Borassi was checked out by the medical team. Due to extremely low blood pressure and his inability to catch his breath or stand easily, Mike was evacuated. On Day 15 during an immunity challenge, Russell Swan’s dehydration caught up with him as he collapsed due to plummeting blood pressure. He was immediately evacuated from the game.

Survivor: One World – On Day 3, Kourtney Moon improperly jumped onto a net during the first immunity challenge resulting in a broken wrist and evacuation from the game for further analysis and treatment. On Day 16, Colton Cumbie was found curled up in a ball where the medical team would diagnose him with acute appendicitis. During his short return to Survivor in Blood vs. Water, Jeff Probst accused Colton of faking his appendicitis as an excuse to leave the show. We would later learn Colton was actually suffering from a bacterial infection.

Survivor: Caramoan – On Day 10, a grain of sand in Shamar Thomas’ eye put him at risk for a corneal abrasion, which could lead to loss of sight. He was evacuated. On Day 36, just moments after tribal council, Erik Reichenbach told his tribe about him feeling dizzy. Suffering from dehydration and malnutrition, the medical team decides Erik’s health is at too much of a risk for him to continue, despite only being 3 days from the end. 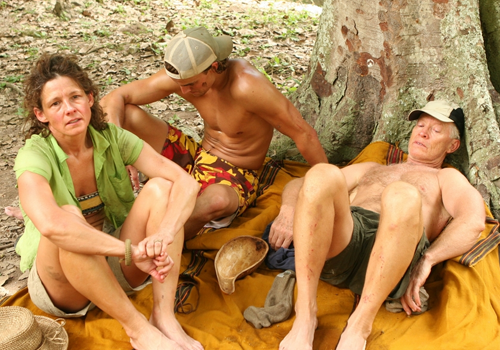 An observation worth making here is how only seven out of thirty seasons have ever contained a legitimate medical evacuation. And even more so, how some seasons considered to be the most testing and dangerous don’t have any evacuations at all. Survivor: Guatemala, a season considered by many to feature one of the most difficult living environments due to the crocodile-latent water, intense heat, and relentless bugs, never once had a contestant evacuated. Survivor: Africa, where tribes had to live in thorn-surrounded enclosures to prevent wild animals from attacking them, avoided evacuations. Survivor: Marquesas is remembered for the painful bug bites that the contestants were constantly coping with, but no one ever left the game due to injury or infection. My point is; it really says something about the careful steps taken to keep contestants from dropping like flies.

To the primary question of all this: let’s say these evacuations don’t happen. Would this affect the outcome of a season?

We learned in Survivor: Philippines that Michael Skupin was not much of a strategist. He managed to make it to the final three, but more by way of Denise Stapley wanting him there than by his own merit. Back in season two, his social game suffered as his tribe saw him as a failing leader, a position he originally intended to avoid. Let’s say he doesn’t fall into the fire and his tribe, Kucha, wins the next immunity challenge before the merge. It would have made Kucha the majority of the Barramundi tribe. For all we know, this could have led to the back-to-back eliminations of Jerri, Amber, Tina and Colby. Maybe Jeff Varner would not have had to be eliminated by a tie-vote rule! All of this is speculation of course, but that small shift right before the merge may have very drastically changed the outcome of this season.

I think it is safe to say that any evacuation that took place later in the game may have directly impacted the pecking order. This goes for James who was evacuated on Day 31 of Micronesia, and Bruce who was evacuated on Day 25 of Panama (probably more the latter than the former. James’ lack of interest in being out there has been talked about like in this Reddit thread with Erik). I don’t believe Bruce was seen as much of a threat in the scheme of the game, compared to the final La Mina member Terry Deitz, and the eventual winner, Aras. Had he stayed in, maybe Shane or Cirie would have worked with him to take out Aras. Maybe Terry would have played his hidden immunity idol! Maybe the final two would have been Cirie and Terry. It’s all “what-ifs” but once again, any evacuation that took place around or after Day 25 when numbers are so much smaller, most likely caused every player to start re-thinking their next actions, which in turn most likely changed end-gameplay.

The last example I want to address is that of Survivor: Caramoan when Erik’s body started giving out on him in the final days of the game. Brenda had just joined the jury leaving just him, Cochran, Sherri, Dawn and Eddie. I cannot speak for everyone else, but I was heartbroken to see Erik go down like that and end up where he finished in his first season. But since this was so close to the end, it begs the question: could Erik have won the game? Neither Erik nor the winner of the season seems to think so. In fact, the tribe was apparently more worried about Eddie winning. Erik’s departure seemingly gave more solidity to Cochran and Dawn’s end game above all else, which is still relatively impactful when considering everyone’s belief that Eddie could take the title. 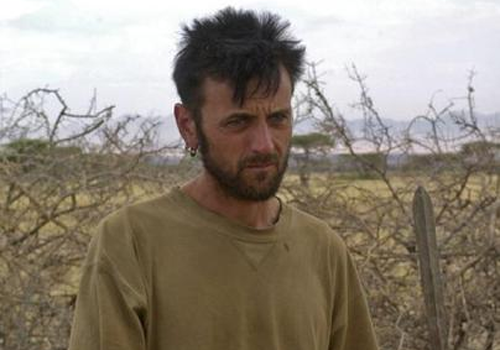 While I was writing this, Lex van den Berghe from Survivor: Africa did an AMA on Reddit where he talked a bit about the conditions of their camp. Here is one of his stories about the early set up of camp:

Africa’s conditions were surely like no other season’s. And Lex’s health in those brutal conditions ended up being his downfall. On Day 38, right at the finish line, Lex woke up sick with stomach pains which would eventually force him to forfeit the final Immunity challenge, which would, in turn, get him voted out by Kim Johnson. Not an evacuation, but it certainly begs the question of who Lex would have taken to the Final Tribal Council had he been able to stick it out through the final Immunity challenge… which he answered in the AMA!

There are not many examples of scenarios where a medical evacuation directly impacted the outcome of a season, but even considering some of these crazy alternative worlds is interesting. What if Lex had won Africa? Would Ethan have come back as less of a threat in All-Stars? What if Erik had stayed in the game in Caramoan? Would Cochran still have obliterated the competition? How would Bruce or James or, hell, even Joe from Tocantins have further impacted their seasons had their bodies not caved in? The injury is one attribute even the most hardcore of Survivor fans cannot factor in to their predictions of gameplay. It’s random. Your pick to win can go down in the last moments due to low blood pressure.

At the end of the day, most of the medical evacuations in Survivor probably don’t drastically impact the outcome of each game – but some just might have, and it’s interesting to speculate about what Survivor history would look like had some of these medical emergencies never happened. With the knowledge of at least one player being evacuated in the game for season 32, fans will undoubtedly be attempting to figure out who the unfortunate victim is. But the truth is, even a superhero like James Clement can be taken out by an infection on his finger. It’s a random variable. The island takes down whomever it wants to.

6 responses to “The Island Strikes Back: Survivor Injuries”