Hello world, this is a section of the internet where I give my plebeian predictions for the next episode of Survivor based on the trailers and whatever sneak previews we get for the week. Fair warning: since Season 40, Winners at War, is an all returnees season, I will definitely be making some references to past seasons of the show.

Let’s jump right in and talk about the aftermath of the votes. We had two Tribal Councils in the premiere episode—one on Day 2 where Season 29 winner Natalie Anderson was voted out, and the second on Day 3, which sent Amber Mariano, winner of Survivor: All-Stars, to the Edge of Extinction.

Post-Tribal Sele saw Jeremy and Michele left out of the vote; however, the latter seemed to be alright wiggling back into the majority. I’m guessing that alliance lines are not drawn that clearly yet this early in the game, to the benefit of Michele. On the other hand, it doesn’t seem that easy for Jeremy—the vote was targeted at him and designed to split him and Natalie up. I feel like he will continue being a target on Sele in the episodes to come, seeing how his existing connection with Natalie can still be brought up as a reason to eliminate him since players on Extinction can impact the game.

At Dakal’s Tribal, we witnessed a pretty dissonant situation for Kim, one of the most dominant winners of Survivor, scrambling on her tribe. Tyson, as well, wasn’t in an ideal situation but managed to initiate himself into the majority. In Episode 2, it looks like the aftermath of Dakal’s vote definitely surfaces on Sele.

In the preview trailer, Boston Rob unrolls a parchment, very probably a fire token given to him by his wife, Amber. And in the Next Time On Survivor trailer, Rob and Parvati discuss how “it could’ve been Sandra,” very likely in reference to Amber’s elimination. My first thoughts predict that this scene sets up a Rob and Parvati versus Sandra rivalry for the season, spearheaded by Parvati. However short-lived it might be, I’m guessing that this dynamic between the two women will play out in the episodes to come. 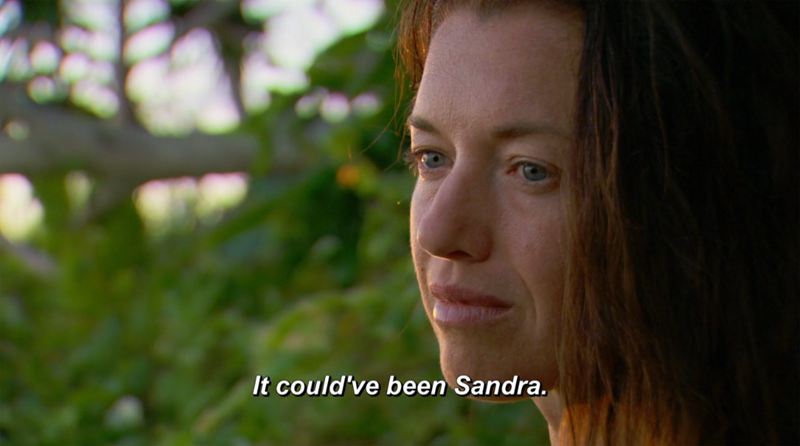 The next segment of the NTOS trailer depicts Denise and Adam, a pair that was highlighted in the premiere episode. Denise whispers, “Ben knows,” followed by Adam muttering an expletive and then a confessional exclaiming his disbelief. At this point, we know that the two have formed an early alliance, but we aren’t privy to any plans or direction that might be headed. I’m guessing that this is the incident described in the episode description: “Also, another castaway must dig themselves out after letting information slip.” The pair accidentally revealed something to Ben, causing his hasty and sneaky behaviour displayed in the preview trailer. My wild guess is that there’s a mass idol or fire token hunt, and Ben caught Adam/Denise finding it, confirming the rumour of them working together.

And of course, it isn’t a season with Tony on the cast without some crazy antics from the cop. After a premiere episode of being on probation, the NTOS trailer ends with him climbing up a 20-feet (aka 6-metres)-tall tree with a makeshift bamboo ladder. I’m still eagerly waiting for a spy treehouse, as I wrote when I picked Tony for my pre-filming Inside Survivor fantasy draft team. 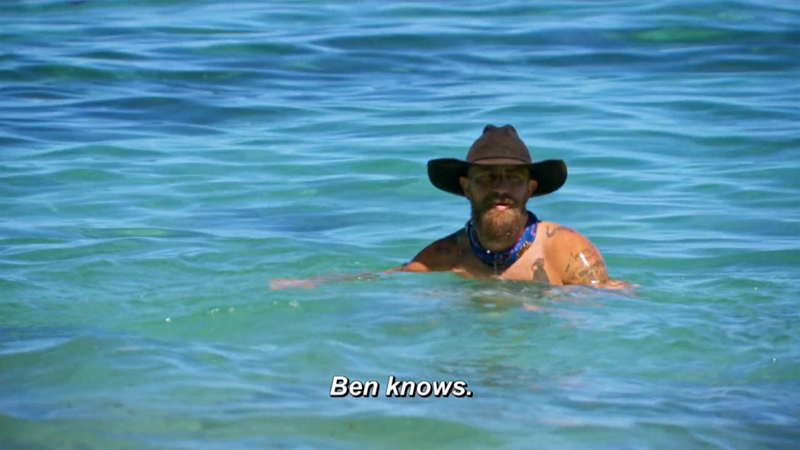 To round up my predictions, I think that we’ll see Sele back at Tribal Council the next episode, where either Ben or Jeremy will be voted to the Edge of Extinction. Ben, because he wasn’t portrayed as a reliable alliance member to trust with information in the premiere, and also because of the NTOS scene with Denise and Adam makes me suspicious that he’ll be a target. Jeremy, as mentioned, because people may still see his connection with Natalie as a threatening link across the islands.

2 responses to “Next Time On Survivor – Episode 2”