FIRE TOKENS REPRESENT YOUR LIFE — More fire token action in the latest episode both at the Edge of Extinction and in the main game. The inhabitants of the Edge went on a token scavenger hunt, which saw both Rob and Tyson snatch up some of the currency. While in the game, the Sele tribe was once again bargaining with the chips. We had a flashback of Michele giving a token to Wendell, and later, Yul tried to come up with a plan to gain Wendell’s tokens. Again, there was talk from the likes of Yul of the fire tokens becoming more important post-merge.

LIONS VS. HYENAS — This “big threats vs. non-threats” narrative remains a vital part of the season, particularly on the Dakal tribe. It’s a story mainly seen through Tony’s eyes. He talked about how Denise’s flashy move made her a big target and, therefore, a good shield to put in front of him going forward—and he needs shields.

The worry is that others still see Tony as the biggest threat on the board. For example, even though Jeremy said he likes Tony, he still views him as a big threat and a big name, no matter how much he tries to push Denise ahead of himself. That could suggest Tony will be a target come the merge.

However, we never specifically heard Jeremy, or Kim for that matter, say they wanted to target Tony. So now that all four of this Dakal tribe have made the merge, it’s certainly possible that this foursome sticks together as big threat shields. Though it’s just as likely the trio of Denise, Jeremy, and Kim throw Tony to the hyenas to protect themselves. The first merge episode should be very telling for which direction this narrative will take.

BAD ROMANCE — There was still tension between Michele and Wendell in the latest episode. It’s a weird one because, in confessional, Michele talked about her distrust of Wendell and how he burned her in the past. But we also saw a flashback of her giving him a token, and she voted with him at Tribal Council. It’s a sort of love-hate relationship. And given its focus in the edit, I expect it to remain a key part of the episodes moving forward.

ADAM’S ALL ALONE — The Yara tribe once again had the least amount of screen-time, but what we did see continued the story of Adam on the outs. The edit really piled on Adam here as he falsely accused Ben and then Sarah of having the idol. All the while, the audience knew Sophie was the one with the idol in her pocket.

Where is this storyline heading? I’m not quite sure. Adam has been undermined so much that there is no way he’s winning. Does he have Final Tribal goat upside? I guess. But there is also plenty of set-up for a post-merge blindside, maybe at the hands of Sophie’s idol, just for added irony. 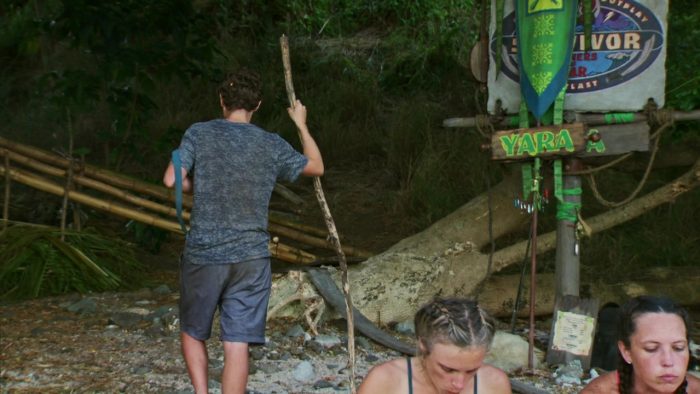 OLD SCHOOL VS. NEW SCHOOL — We saw the culmination of this storyline in the last episode as Yul became the final old-schooler sent to the Edge of Extinction. “New schoolers got the old schoolers,” Tyson said as Yul arrived on the Edge. Of course, with the Edge populated by old-schoolers, there is a high chance one of them returns and gets some redemption against the new schoolers. So this story might not be entirely closed off just yet.

“I’M WITH YOU” — This statement Nick made back before the swap finally came back around when he blindsided Yul. It always felt like there was some ironic foreshadowing there, given how much focus the edit put on the Dakals all promising loyalty come a swap. And even here, at the Sele Tribal, Nick again promised to stick with this four (Nick, Michele, Wendell, Yul) should he or one of them return from the Edge. Is that more irony? I would think so given a week earlier he said there will be betrayals in this game. Based on what we’ve seen so far, I don’t expect Michele/Nick/Wendell to remain a tight trio for long.

MICHELE, NICK, & WENDELL — This trio worked together at the last vote, but as I said above, I can’t see the three of them sticking together for long. There is tension between Michele and Wendell. Wendell has talked about his willingness to backstab this season. And Nick, too, has mentioned how he expects betrayals in Winners At War.

DENISE, JEREMY, & KIM — Another trio was set up in the last episode on the Dakal tribe. Denise and Kim specifically talked about working together, both at camp and in confessional. It certainly seemed like both were on the same page. It’s a little harder to tell with Jeremy as he didn’t directly talk about this alliance in confessional, so we don’t know his true thoughts. Kim spoke about having a great bond with Jeremy, but I don’t feel like that has been represented well in the edit. 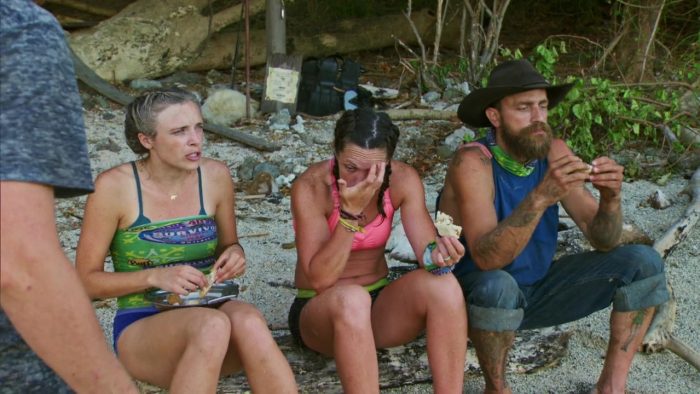 BEN, SARAH, & SOPHIE — We still don’t have anything officially cementing this trio as a long-term alliance, but they are clearly shown as being together on Yara. Adam is obviously on the outs, and we’ve heard previously about how Ben feels close with Sarah and Sophie.

These are the pre-swap alliances that survived the pre-merge and will reunite at the merge.

COPS R US — Sarah and Tony have both made the merge, and given the amount of focus this duo had pre-swap, I expect them to regain focus in the coming episodes.

MICHELE & JEREMY — While they never cemented or talked about their alliance in confessional, Michele and Jeremy were obviously working together on the original Sele tribe. It’s certainly possible they will reform next week. 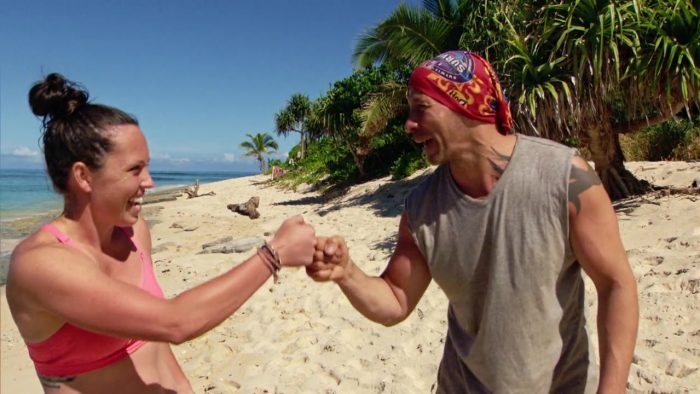 NICK, SOPHIE, & WENDELL — These three were part of the free agents alliance, but that group was mostly credited to Yul. I don’t think we ever heard these three talk about each other pre-swap. If anything, I expect Sophie to be annoyed with the boys for getting rid of Yul, who was also tightly aligned with Sophie.

Next week will see the first battle back challenge of the season. Who will return? Well, let’s have a look at the contenders.

NATALIE — The first three or four episodes were huge for Natalie, as she went on a token spree at the Edge. She received a ton of positivity in the edit and from her fellow players. However, she’s sunken into the background in the past couple of weeks. Does that suggest her early content was merely circumstantial? It’s possible. Still, she has four tokens, which means she can buy challenge advantages. And even with a quieter edit in recent weeks, I would still put her chances of returning high.

AMBER — I feel like Amber is one of the least likely to win her way back in. She’s had a little bit of content on the Edge, but it doesn’t have that drive or story-hook of a player coming back into the game. 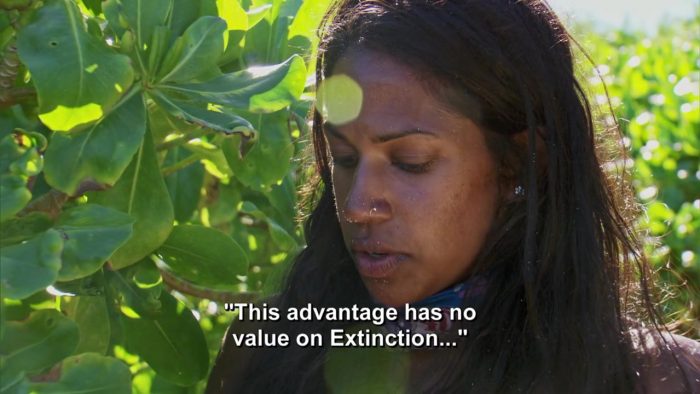 DANNI — Danni’s had the least amount of content of all the Edge inhabitants, and that makes it hard to see her as a returnee. That said, maybe her “slow and steady wins the race” line was foreshadowing. It certainly wouldn’t be the first time a quiet Edge edit resulted in a return to the game, given what we saw with Chris in Season 38. But you would like to think in an all-winners season, the Edge player would receive a bit more focus.

ETHAN — Ethan’s had a decent amount of air-time on the Edge, but I tend to think his story is more about surviving. It’s about him fighting through the pain and showing his body can handle the elements. Perhaps that fighting spirit will result in him winning the battle back, but he’s not in my top contenders list.

TYSON — Tyson has to be a favorite to return, given his edit and the way others have spoken about him. Not only is there the whole “lose the battle but win the war” narrative, but we’ve seen the likes of Nick talking about maybe getting a chance to work with Tyson, and, of course, that odd focus on his bond with Sarah. He’s also had a strong edit on the Edge itself, which has shown him working hard for tokens.

ROB — Rob had a big edit in the game, and last week, he was shown outsmarting his fellow Edge inhabitants. Not only is Rob a strong challenge performer, but he now has tokens to use on advantages. So when combined with his significant edit, there is certainly a chance Rob could win his way back into the game. 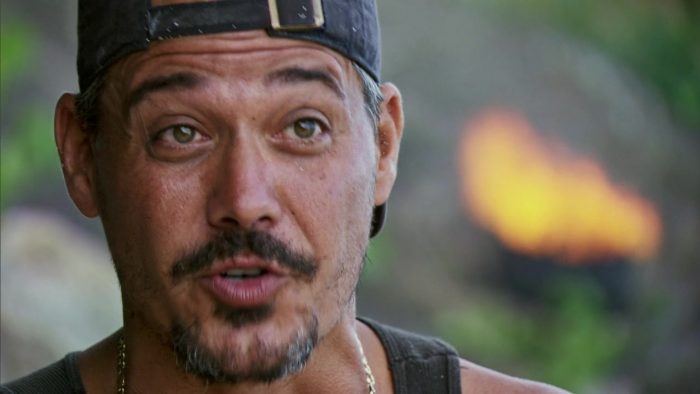 PARVATI — Parvati’s main focus in the latest episode was as a friend to Ethan. There wasn’t any real talk about her own game or foreshadowing of her return. Also, unlike, say, Tyson, there aren’t any lingering stories for her to pick up on in the game—other than maybe realigning with Michele. Again, it’s hard to predict an Edge returnee edit, but Parvati is low on my list.

YUL — As the latest arrival to the Edge, we don’t have anything to go on in terms of an Edge edit. However, there are hanging threads within the game that Yul could pick back up should he return. Not only is there a potential revenge arc with Nick and Wendell, but there is a lingering alliance with Sophie. So I would say there is a solid chance for Yul.

So, with that said, I would put the top four Edge contenders to return as Tyson, Yul, Natalie, and Rob, in that order.

As I’ve said before, I’m pretty low on anyone who originally started on original Sele winning, but I like to at least keep one or two in the conversation for the sake of balance.