FIRE TOKENS REPRESENT YOUR LIFE — While we didn’t get an Edge of Extinction segment in this episode, there was still some fire token talk at the tribe camps. Nick had a confessional about receiving a token from Tyson, which perhaps included some foreshadowing. “I think in another situation, I would have really have liked to work with Tyson, and maybe that situation will come up,” he said. Is that a hint that Tyson could return to the game and align with Nick? This also ties back to Nick’s first confessional of the season, where he talked about the importance of fire tokens, and so, I suspect his story will revolve around the currency.

There was one other brief mention of tokens, other than when Rob willed his to Parvati at the end, and that was Michele telling Parvati she’d give her token and any future tokens for an idol right now. That could also be foreshadowing, especially with Parvati now having four tokens to her name.

TONY ON PROBATION — It feels like Tony’s story is moving onto its second stage now, which I’ll talk about in the next section, as his lowering people’s guards strategy moves into the big threat shields strategy. But Tony continues to be a presence in each episode, he always shares his thoughts and explains his moves, and we still haven’t seen him become a target. 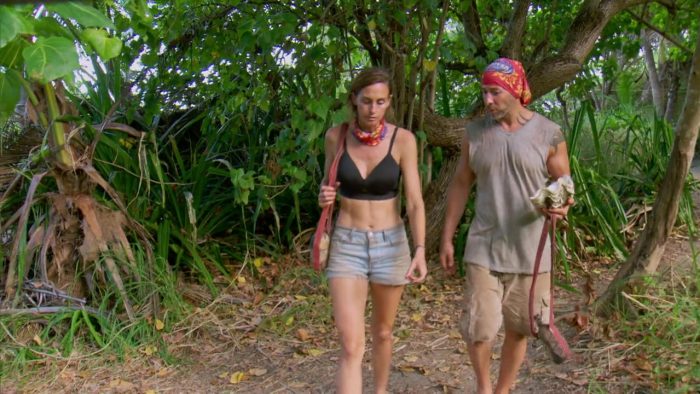 LIONS VS. HYENAS — This is basically the continuation of the “free agents vs. the connections” narrative, except Tony put a new name to it. He talked to Sandra about how the lions (i.e., the big threats) need to surround themselves with other lions; otherwise, the hyenas (i.e., the lower profile threats) will gang up and eat them. We saw this in the previous episode regarding the Tyson vote, and it remained a focal storyline in the latest episode.

Looking back, this narrative has been a big part of Tony’s arc right from the premiere, as sort of a secondary story to his “on probation” stuff. In that first episode, Tony mentioned wanting to keep Amber around so that “husband and wife” would stay in the game as a big shield. Last week, he talked about keeping Tyson around as a shield, and this week, it was Kim. The problem is, so far, Tony has failed to get his way. He’s let these shields get away, even if the blame was put in the hands of others.

The question here is, will the lions continue to be eaten by the hyenas, and if so, will Tony also fall victim? Or is it going to be that Tony is the only voice of reason, but the others don’t listen to him, and he ends up as the last lion standing? Whichever way it goes, I expect this lions vs. hyenas story to play out a while longer.

BAD ROMANCE — The tribe swap gave birth to some new stories, the most prominent of which was probably on the new Sele tribe. Michele and Wendell’s outside-the-game relationship, and subsequent break-up, became a hot topic, one filled was awkwardness and tension. I’m not sure if this will be a long-term narrative, but I expect it to at least play out for the rest of the pre-merge. 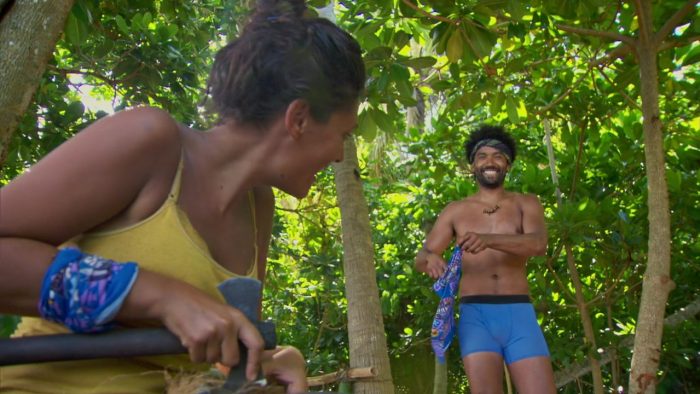 KIM IN THE MIDDLE — This one is tied to the lions vs. hyenas story, and it sees Kim caught smack dab in the middle of the new Dakal tribe. While Kim hasn’t had a ton of air-time so far this season, there is a slight underdog vibe to her edit, and this could be the start of a comeback. She now has options as a swing vote between Denise & Jeremy and Sandra & Tony, and with the amount of set-up it received last week, I expect to see a follow-up in the near future.

MICHELE HAS SOMETHING TO PROVE — No real follow-up on this particular arc, but Michele still received significant focus in the episode, and I don’t doubt we’ve seen the end of this storyline.

“I’M WITH YOU” — There was no direct follow-up on this statement made by Nick back in episode four when he made it clear he wouldn’t flip on the red tribe at a potential swap. But he did reiterate how good he felt to land on a tribe with the numbers and his closest allies Wendell and Yul. There is just something ominous-sounding about this that makes me think someone in this alliance will flip. Early in the episode, there was an off-handed (but subtitled) comment from Sarah telling Nick and Yul “not to get cocky,” and the whole “Nick has a crush on Parvati” thing could perhaps be hinting at Nick flipping to Michele and Parvati. 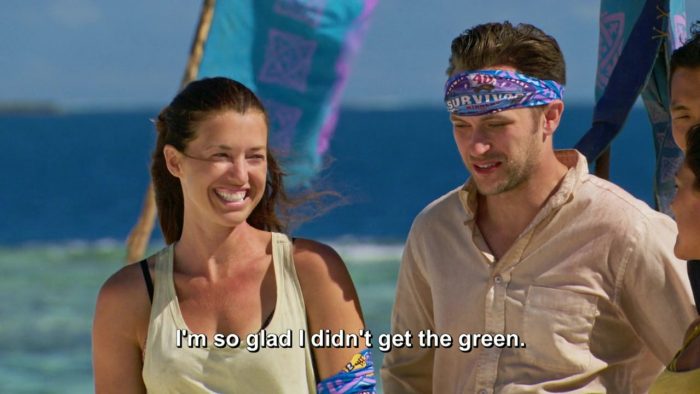 ADAM THE RAT — This story sort of took a backseat in this episode as the Yara tribe was more about the implosion of the former Sele boys and Boston Rob’s downfall. That said, Adam’s story of being an untrustworthy double agent did essentially lead to this moment, where the trust was broken so badly between Adam, Ben, and Rob that it doomed them from ever working together again.

SARAH & SOPHIE — The swap birthed some new alliances while it put others on hold, and one of those new partnerships came on Yara, between Sarah and Sophie. Being down on numbers 3-to-2, this duo was basically thrust together, but cemented by an idol find. As for who this alliance favors the most, that’s a tricky question.

“I’ve never been able to read Sarah,” Sophie said in confessional. “But I really felt after giving her this half of the idol, she felt like ‘this is a girl I can work with til the end.'” While it’s good that Sophie got to comment on the alliance, it’s a little worrying that we never heard Sarah’s thoughts. Sarah never confirmed if Sophie’s read was right. Plus, Sarah is already in a duo with Tony, an alliance where both members gave it positive reinforcement. So it will be interesting to see how much legs this Sarah & Sophie partnership has in the long-run.

MICHELE & PARVATI — Another duo forced together by being on the outs, Michele and Parvati bonded over their predicament. I can’t see this being anything other than a temporary alliance, however. There was no real talk of their alliance in confessional, as Michele’s story revolved around her past relationship with Wendell, and Parvati’s story was about trying to find an in with the old Dakal members. 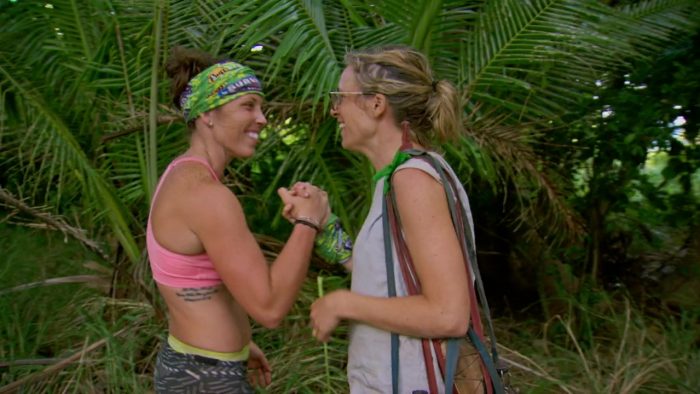 NICK, WENDELL, & YUL — Three of the free agents group ended up together on the new Sele tribe, and, as previously mentioned, Nick mentioned the alliance directly in confessional. There was no talk from Wendell or Yul, though, in regards to this trio, but b-roll footage did show them to be together.

SANDRA & TONY — The former Game Changers are still together and still look to be aligned. But we only heard specifically from Tony in this episode. Sandra didn’t receive a confessional at all. It was all about Tony wanting to protect the lions and trying to get through to Sandra.

MICHELE & WENDELL — It’s not an alliance, but these two are now linked via a past relationship, which is clearly significant to the narrative to a certain degree.

PARVATI & YUL — There was a short scene in the latest episode where Parvati and Yul reunited. Yul told Parv that she’s his wife’s favorite player, and Parvati talked about playing on Cook Islands with Yul in the past. As with the above, it’s not really an alliance, and Yul didn’t comment on it at all, but it’s a potential connection moving forward.

ADAM & BEN — These two have had such an odd relationship throughout the first five episodes. They were both linked to Denise early on. Adam made it clear he didn’t trust Ben. Adam was left out of the Ethan vote by Ben and was left groveling to him in the next episode. And yet here they were stuck together and voting with one another. Whether allies or enemies, I expect this relationship to continue to be highlighted in the coming weeks.

DENISE & KIM — Another short scene, but potentially the start of a future alliance. Kim approached Denise and talked about moving forward together. Denise spoke of it confessional about how Kim might be willing to pull her in or even jump over to her and Jeremy. I definitely expect to see this relationship develop more in the future.

As I’ve said before, I’m pretty low on anyone who originally started on Sele winning, but I like to at least keep one or two in the conversation for the sake of balance.