Hello all, welcome to the Edit Bay, a swanky island resort located just south of the Edge of Extinction. As you may know, I’ve decided not to write Edgic this season due to a mix of fatigue and not having the time or desire to do a deep dive edit analysis on a season with the EOE in play.

However, because readers have been asking for some form of edit-based content, and because I enjoyed the Winners At War premiere so much it brought back some of my enthusiasm for Survivor, I’ve decided to create the Edit Bay as a happy compromise. I won’t be assigning ratings or breaking down every character, instead, I will offer some short “hot takes,” if you will, on the narrative arcs and top winner contenders. So let’s see how this goes.

FIRE TOKENS REPRESENT YOUR LIFE — The latest twist from Jeff Probst’s never-ending bag of tricks looks like it will play an important role in the season. The fire tokens are not only going to affect the gameplay, but they’re going to be crucial to a player’s success. One of the first confessionals of the episode, when the Dakal tribe arrived at camp, was Nick speaking about the tokens and their potential impact.

“In my opinion, these tokens are going to end up being a huge part of the game,” Nick said. “And I think the winner of this season will be the person who is able to use the currency correctly.” That’s a big statement and one that felt intentional. If we take it at face value, then the champion of this season will be someone involved with fire tokens to some degree. So anyone that makes a successful move with the tokens will be someone to keep an eye on as a top contender.

FAMILY MATTERS — There was a lot of talk of family, particularly children, in the season premiere. On Dakal, we saw Amber, Sarah, and Tyson discussing their kids, with Tyson opening up in confessional about his pride in being a stay-at-home dad. Over on Sele, Jeremy, Parvati, and Rob all bonded over their children, with new mom Parvati talking in confessional about her change as a person and a player. “Being a mom is an absolute new life change that can help me relate to people in a totally different way,” she said. “So I’m totally using the mom card. Are you kidding me?”

While I’m unsure if this narrative will tie into the winner’s game, I do believe the family talk will be a recurring theme throughout the season. For those that read the pre-game press, you will know that this season, the players will have their children visit as part of the loved one’s challenge. Bringing the castaways’ kids out to the island is sure to be a huge, emotional moment that the show will no doubt milk for all it’s worth. And so, for that reason, I suspect the family/kid talk will continue to receive focus in the weeks to come. 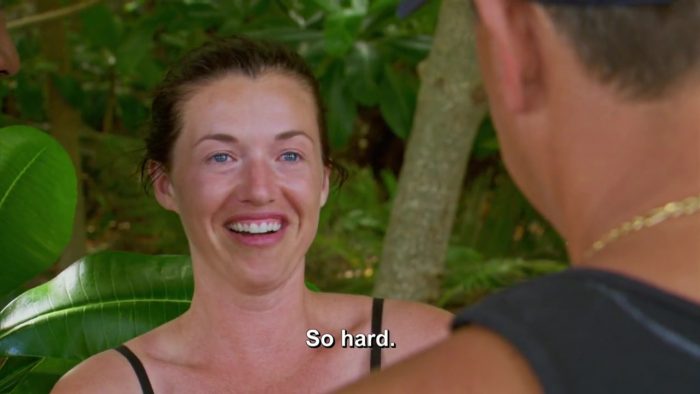 OLD SCHOOL VS. NEW SCHOOL – Similarly to the early episodes of Second Chance, there was a spotlight on old school versus new school. This was seen primarily on the Sele tribe, where Danni, Ethan, Parvati, and Rob formed an old school alliance. Rob talked about not wanting the new schoolers to dictate the game while criticizing their rapid-fire style of gameplay. “This is what they don’t do, the new school people, they don’t have conversations and get to know anybody,” Rob said.

The differences in old school and new school gameplay was also highlighted by the likes of Amber, Ethan, and Yul. Amber talked of the game moving fast at Tribal Council. Yul referenced how long ago it was that he played. And Ethan was playing catch up over on Sele. “The pace of the game is warp speed. I’m so unaccustomed to this; I have no clue what is going on,” he said. “The game has evolved, it’s now at a lightning pace, and you either get in line or get out,” Rob added.

But who will come out on top? Old school or new school? It was the old school alliance that got their way in the first vote at Sele, but an old-schooler in Amber was voted out at Dakal’s first Tribal. Also, if we trust what Nick said about the fire tokens playing an important role in the eventual winner’s game, then perhaps what he said about the new school is vital too. “I am from the new seasons where we’re used to twists, we understand there’s unpredictable facets of the game, so I think my chances to win the game got much higher,” he said.

Much like with Second Chance, I think this old school versus new school battle will be a pivotal story early in the season, even if it doesn’t carry through until right until the end.

THE COMPLEX TRIBE – I know not everybody subscribes to the complex tribe theory, but it’s something that has served me well in recent years. In my mind, there is no doubt that Dakal (red) was the most complex tribe of the premiere. Not only did we follow the Dakal tribe after the first Immunity challenge (despite Sele losing), but the dynamics were far more fleshed out and intricate on the red team.

You had the whole poker alliance story, the free agents formation, the Tony/Sandra/Sarah trio, the underdog Kim story, Tyson the dad, Wendell the builder, Nick and the fire tokens, Tony on probation, Sandra feeling betrayed, Amber on the outs, etc. If you just compare the pre-Tribal scrambling from each tribe, you can see the difference. Sele had some interesting stuff too, no doubt, but a lot of it boiled down to old school vs. new school, and outside of that delineation, we didn’t get a true sense of all the alliances and relationships, outside of Adam and Denise.

SANDRA FEELS BETRAYED – Amber’s elimination can be credited in part to Sandra, who felt slighted by Boston Rob. In confessional, Sandra revealed that Rob never told her he was coming back to play, despite spending 36 days together on Island of the Idols. Sandra took this personally, as she admitted, and getting rid of Amber was somewhat a revenge move. It will be interesting to see Rob’s reaction to his wife’s elimination and if this feud with Sandra continues.

UNDERDOG KIM – It was so unusual to see the dominant Kim Spradlin on the outs, but it did provide the One World champ with an intriguing narrative. While Kim was certainly playing on the backfoot, she recognized her position, and the edit gave her the time to talk through her thought process. She could have quite easily being buried here. Instead, Kim’s edit now has the potential for a rags to riches story.

TONY ON PROBATION – The crazy Cagayan winner got a story early on about maintaining a low profile. He recognized his mistakes from Game Changers and was focused on rectifying those errors. Whether he can keep this up is a story to watch going forward. 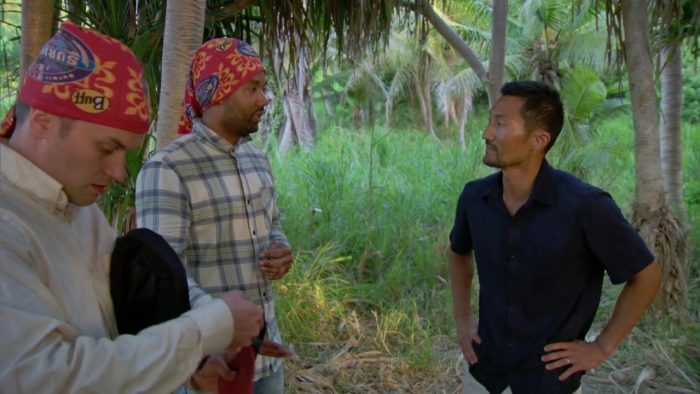 THE FREE AGENTS – On Dakal, we saw the formation of a “free agents” alliance between Nick, Sophie, Wendell, and Yul. Both Sophie and Yul talked about being disconnected, especially compared to many other players who have played together previously. The term “free agent” was used a bunch of times, and the edit shined a spotlight on this alliance, so again, it’s one we should keep a close watch on.

ADAM & DENISE – This partnership received a fair amount of air-time, but it’s hard to say right now whether it’s a long-term storyline or not. Adam and Denise did become targets after they got lost in the woods together, and so, it could have been a necessity to highlight them. That said, we did hear their strategy talks. Adam mentioned being Denise’s new Malcolm. And they survived the vote—not only that, but Adam was the one to put the target on Natalie and Jeremy.

BLABBERMOUTH BEN – It seemed like Ben was all over the place in the premiere. Firstly, he spilled his guts to Rob about Danni throwing his name out, and later, he clued Adam in on the fact he was a target. Now, Ben admitted that he was starstruck by Rob, hence blabbing all the info. And he did explain his reasons for talking to Adam. But the edit sort of painted Ben as an untrustworthy, chaotic player. 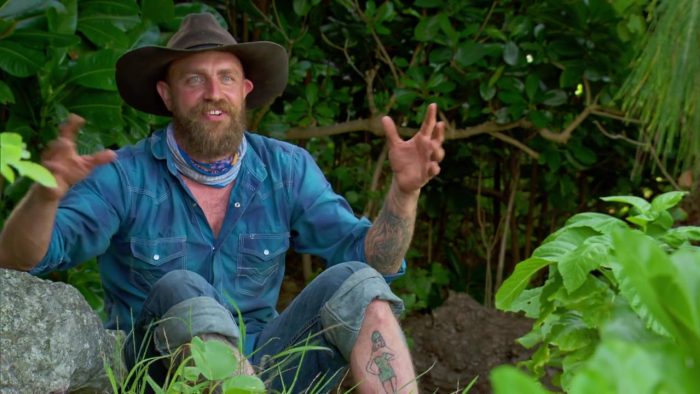 MICHELE HAS SOMETHING TO PROVE – This was a smaller story of the premiere but one that could become more relevant as the season moves on. Michele was pretty much absent from the first hour, but in a way, that could have been editorial protection, seeing as she was left out of the Natalie vote. In the second hour, Michele acknowledged her bad position while talking about her past season and the surprise over her win (we even got flashbacks). “I went into this feeling so much pressure because I feel like I have something to prove,” she stated. This could set-up a sort of redemption arc for the Kaoh Rong winner.

THE POKER ALLIANCE – The infamous poker alliance was a central focus of the Dakal vote, but I’m not sure whether it will remain a key narrative of the season. The topic was already broached at Tribal Council, and with Amber’s elimination, plus Tyson and Kim jumping ship, that could be the end of it.

The below list is just the edits that stood out the most to me after the premiere. It doesn’t mean that all those not mentioned are out of contention.