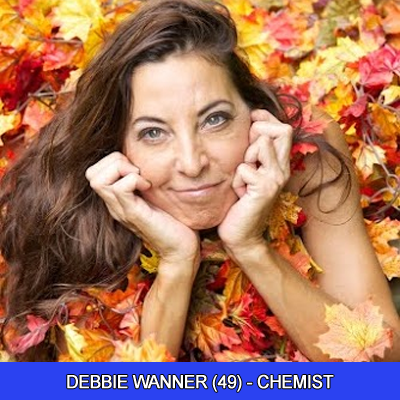 Debbie Wanner is a 49-year-old degreed and experienced analytical chemist who is currently working as a Laser Technician for Judson A Smith. Wanner, currently residing in Reading, Pennsylvania, graduated from Kutztown University of Pennsylvania in 1995 with a degree in Chemistry, she went on to complete five MBA classes at Alvernia College until she had to drop out due to finances. Previously, Wanner has worked as a Manufacturing Supervisor for Lucent Technologies where she supervised over 40 union staff in the production of lithium niobate wafer fabrication. She was the Quality Control Manager at Blue Marsh Laboratories where she performed wet chemistry analysis. She then went on to become an Electronic Counterfeit Detection Analyst for Silicon Cert Laboratories where she did the forensic analysis of integrated circuits.

But that isn’t all. Wanner is also a Hawk Mountain 1st Class Ranger trained in winter and summer survival. She is also a Squadron 811 Captain and Communication Officer for the Civil Air Patrol and a 1st Lieutenant in the United States Air Force Auxiliary. Wait, there’s more. She is also a fitness trainer and former aerobics instructor trained in conventional gym equipment (i.e., Nautilus, Bowflex, etc.) and a part time model under the unintentionally inappropriate screen-name “bostonterror”. She believes in a holistic approach to health including meditation, yoga, walking and light weights for beginners. Wanner is also a member of the Northeast Boston Terrier Rescue organization and has her own Boston Terrier named Spanky who she often goes running with. She has two daughters and is a big aficionado of motorcycles, German cars, airplanes, and boats.

Wanner has also been applying for Survivor since at least 2010, and with an impressive background that puts both Coach Wade and Phillip Sheppard to shame, it is obvious why Wanner will be a part of the Brains tribe on Survivor Kaôh Rōng – Brawn vs Brains vs Beauty 2.