Brawn tribe member Jennifer Lanzetti has become the second castaway to be voted out of Survivor: Kaôh Rōng – Brains vs. Beauty vs. Brawn.

The 38-year-old contractor from Salt Lake City, Utah was eliminated after the Brawn tribe lost their second immunity challenge in a row. Jennifer was originally in a solid alliance with Cydney, Jason, and Scot but after growing frustrated with Jason’s attitude she considered flipping and forming an all-girls alliance with Alecia and Cydney. However, her back-tracking and wishy-washy approach to the plan ultimately caused her downfall when her plans were exposed at an insanely intense tribal council.

Jennifer received three votes from Alecia, Cydney, and Jason. Jennifer and Scot voted for Alecia. In her post-tribal council, confessional Jennifer said she was surprised that her tribe didn’t keep her around for strength in challenges but that she doesn’t regret anything. 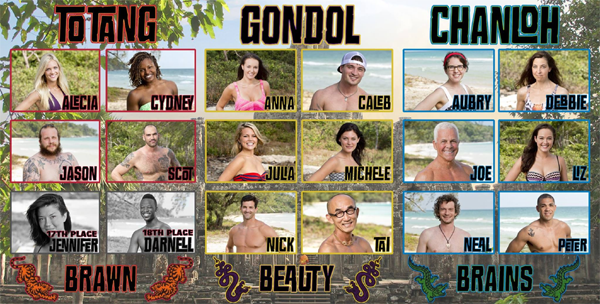