The coming episode, titled “Just Go For It,” is the penultimate episode of the season. Although some segments were exceedingly slow and painful to sit through, I would say that taking everything to account, three months did pass rather quickly as we near the end of Survivor: Island of the Idols.

Episode 12’s post-episode trailer has been one of my favourite NTOS trailers in a while. It begins with a shot of Noura committedly spinning on the beach, with a comment from Elaine about her craziness. This comes right after an entertaining Noura-ful Tribal Council, where her plans to get rid of Tommy were blown up largely by Dean, but also arguably primarily by herself. The spinning here really cements Noura’s refreshing character and way of playing Survivor.

We then cut to the challenge, where the players are also spinning, to unwind some rope from a spool. Visual technique aside, I’m wondering if Noura’s spinning on the beach suggests her practicing for the challenge. This would imply that she perhaps received a clue as part of an Island of the Idols test, similar to the caller challenge during the pre-merge. Another possibility would be that someone else received this information and revealed it to the tribe. And yet another option would be that it could really just be Noura being Noura, and spinning could just be part of her warm-up exercise or meditation routine. At this point, I wouldn’t be surprised.

The next bulk of the trailer focuses on Tommy and Lauren, a pair that we’ve seen working together for almost the whole game now. Sitting alone by the beach, Tommy is comforting Lauren, saying, “No one’s coming for you, and they can’t.” I’m pretty certain that the two are going to stay together until the end of the game, which is why I think Tommy’s confessional that immediately follows (“I need her out of this game, ’cause she’s gonna win”) is a misdirection to us viewers. 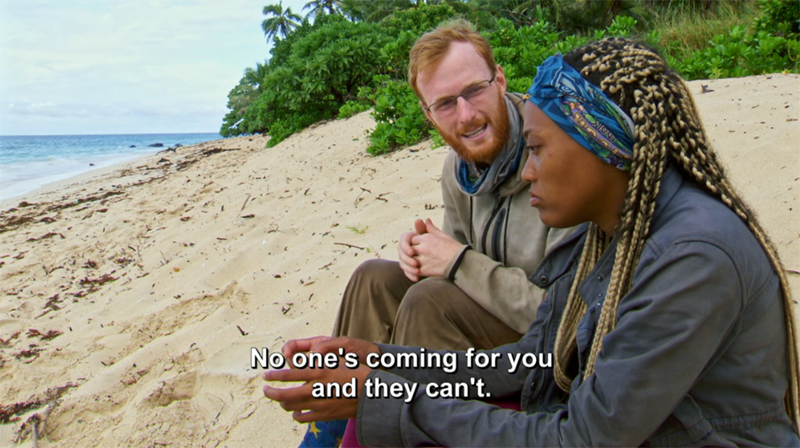 With seven people left, I think it’s too risky for Tommy to gather numbers that are not as loyal to him, to vote Lauren out. They both clearly trust each other, so I feel like they’re much safer working together in this endgame than at the hands of Janet, Dan, Elaine, and Dean, who can easily assume the majority and vote them out as singles. As such, I speculate that Tommy is actually referring to Elaine or Janet in said confessional.

For Janet’s case, the fact that she’s loved by everyone has recurred a couple of times throughout the season. A caring older woman that has connected socially with everyone, and has also proven herself in challenges, is definitely a threat to win the game, and I’m sure not only the viewers acknowledge it. As for Elaine, I feel that her being a threat to win hasn’t been as prominent, especially with slight comments undermining her lack of strategy. However, there was the very striking first impression we got of her way back in the premiere that framed her as a sociable and likable personality, easy to talk to, and fun to be with.

Personally, I’m predicting that Elaine will be the target for the next vote. I’m not certain about her alliances—she seems close to Tommy, but so does Dean, and they’re both definitely below Lauren in Tommy’s pecking order. I feel like her cemented charisma attracting both players and the jury will be enough to send her home before the finale.

All in all, I think the Tommy-Lauren pair will stick together this episode. I’m also predicting that Tommy wins the Immunity Challenge this week. I feel like there’ll be some debate between taking Noura out for being the erratic and unpredictable loose cannon she is, but ultimately the players would want to keep her and get rid of more obvious threats like Elaine first.

Stephanie is an English literature and film graduate from Singapore who spends too much time analyzing her favorite TV shows. Besides patiently waiting for an Asian version of Survivor she can take part in, Stephanie enjoys dabbling with music, sound production, and writing, and would travel across the country for good ayam buah keluak.

2 responses to “Next Time On Survivor – Episode 13”