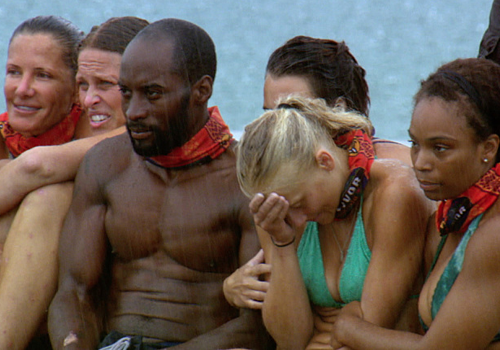 First off, let’s see how I did last week.

Verdict: A+! Give me all your points! The “second vote” ended up being more powerful as it allows him to steal someone else’s vote, but I’m going to give myself full credit here.

2. The hidden immunity idol is the well decal, and Stephen will figure this out.

Verdict: Not so much here. A little bit of fan fiction never hurt. F.

3. Abi, Kelley, and Ciera will be in the middle of a play to take out either Tasha or Jeremy. If it is the latter, he will probably use his idol.

Verdict: I don’t think anyone had any reason to suspect that Kelly would be the target of last week’s vote. That said; it was inevitable that the “coven” would team up with other players to create a voting bloc. I’ll give myself a C- for correctly predicting the safety of our witches.

Part 2: WILL SOMEBODY GET THESE PEOPLE SOME PONCHOS? 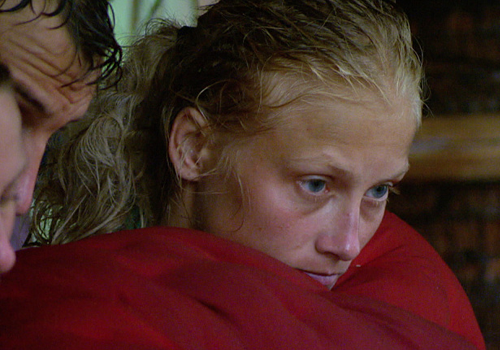 Seriously. Except for a scene from the beginning of a challenge, all the preview material shows are players getting drenched. Poor Stephen has a breakdown and Keith needs to cover himself with a tarp to do a confessional!

I am fairly certain that no one is quitting a season like this, even in these conditions. Despite all the blindsides and trash talk, this is a cast that appears to have a decent amount of respect for each other; at least enough to keep each other warm and not push someone to quit as a strategic ploy.

Honestly, these previews are irritating me a little bit. We have a two-hour episode coming up, and all we know is that people are sad and wet and have an opportunity to sit out of an immunity challenge. 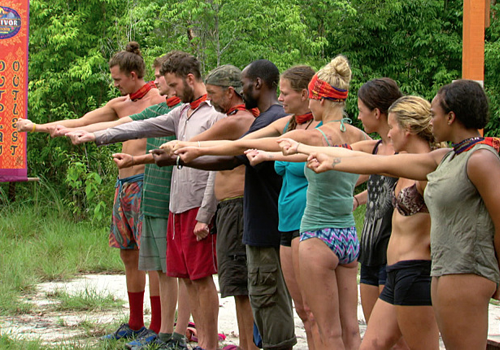 Traditionally, when Probst hands out black and white rocks to players at an immunity challenge, it means he is giving them the opportunity to either participate in the challenge or sit out and enjoy gorging themselves on burgers or pizza. That said, my memory is not good enough to remember if this type of challenge was ever framed as a game-changer in a preview.

As we are shown multiple shots of contestants at the challenge, Probst’s narration infers that the terrible conditions are going to force “…a decision that could change the game.”

I was on Twitter while watching the episode and I think Jessica Liese, who co-hosts The Amazing Race after show on Rob Has a Podcast, said it best:

Did Jeff just try to sell the idea that the old compete-or-eat challenge is a big game-changing deal? #Survivor

The only way I can think of this type of situation becoming a big deal is if something bizarre happens regarding who decides to play: everybody plays, everybody eats, Joe sits out even though it will cost him – things like that.

That said, looking at the clip, I don’t see a picnic table or trays piled high with junk food. I see an odd endurance challenge set-up, and the loser bench along with black and white rocks divvied out between the players. This could simply be reading too much into nothing, but I don’t think it’s the typical “compete-or-eat” challenge we are used to.

This has been a season of firsts, and I have no doubt that this format is going to be altered in some way. The issue is, I really don’t know how it’s going to change. Part of me thinks that each vote to sit out will be an additional piece of support at their camp and shelter. If three people sit out, you get new tarps, if five people sit out you will return to a hardwood roof over your heads… but that kind of sounds ridiculous to be honest.

If the set-up for a “decision that could change the game” comes down to whether you want to participate in a challenge, it better be something interesting. Otherwise, the one piece of intrigue in all of the preview material is straight-up lying to me. 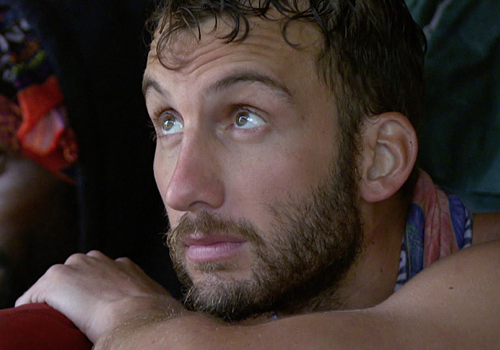 Not a whole lot to talk about despite the upcoming two-hour episode. Don’t really know how to comment on the water wrestling reward challenge we got some shots of, so I’m not going to dwell on it too much. Keeping it limited to what I feel I can actually predict!

2. The “eat-or-compete” challenge isn’t going to feature food, but some other alternative. Stephen will sit out, Joe and Spencer will not. Kelley, Ciera, Jeremy and Abi will participate, Keith, Kimmi, and Tasha will not.

3. One more time: I’m going to predict Joe’s elimination. We have seen other players do decently in balance and endurance challenges, and it appears the upcoming immunity challenge is in the same vein. I think Abi or Kelley could win it.

4. Since it’s a two-hour episode, I’m assuming we will have two eliminations. Perhaps the second will feature the tribe finally going after Jeremy like he has foreshadowed in his confessionals, but he will not go home thanks to his idols. I think one of the “witches” will end up as the casualty, likely Ciera for being so vocal. I believe they are tired of writing Kelley’s name down at this point.

4 responses to “Next Time On… Survivor: Cambodia Episode 10 and 11”