The swap might have been two episodes ago, but it still feels fresh when it comes to Australian Survivor. Even though there has been time to settle into the new camps physically and socially, it seems like original tribe lines are still a factor in how the new tribes operate. Locky and Mat are two who were firmly separated within their original tribe. The past two episodes they’ve played nice, and Mat, in particular, has put aside his own agenda in favour of going with the tribe consensus. That said, the spirit of cooperation is no longer. This is a cast chock full of people who are coming into the game with an ego. Many of these castaways played in dominant and/or leadership positions throughout their first seasons; Mat, Locky, David, and Lee, to name a few. When all these egos come together, it sets up a major clash of the titans, and this was the opening act.

The Godfather can’t stand working under Prom King Locky, and Locky is certain the Godfather is getting ready to make a move. The tension between both men’s egos is palpable and evident to anyone who has seen them in one place the entire season so far. Without the shields previously in place (David forcing an uneasy truce or the obvious targets of physical threats Abbey and Lydia), this rivalry between Locky and Mat has nowhere to hide. For goodness sake, Locky even said he was glad to go to Tribal Council! Even though Locky has a self-confessed lack of strategic prowess, he did have the good sense to choose some strategically savvy allies—AK, in particular, is in the background to direct him towards a safer plan involving split votes.

Meanwhile, Mat is recruiting castaways to his side. First, he tries to win the votes of Harry and Shonee and follows it up by pursuing the vote of Flick (whom he believes is on the bottom rung of her alliance’s ladder). To all, his argument is the same: to form a new majority on Vacama and to escape Locky’s leadership. Harry, Shonee, and Flick all seem to take his proposal seriously. Harry and Shonee considering making the “big move” and making the game more “fun.” While Flick ponders whether she can improve her position by flipping.

When Tribal rolls around, there’s lots of chatter about how the alliance of Locky/Brooke/AK plus Flick operates—they claim democracy while John states it’s whoever the power couple chooses. Then, the idol that has terrorised Locky for so long gets played and saves Mat’s life in the game. But there is nothing that can save his newest ally John—with three votes he’s the newest member of the pre-jury. While you’re out there, John, maybe get someone to have a look at that sore on your bottom? 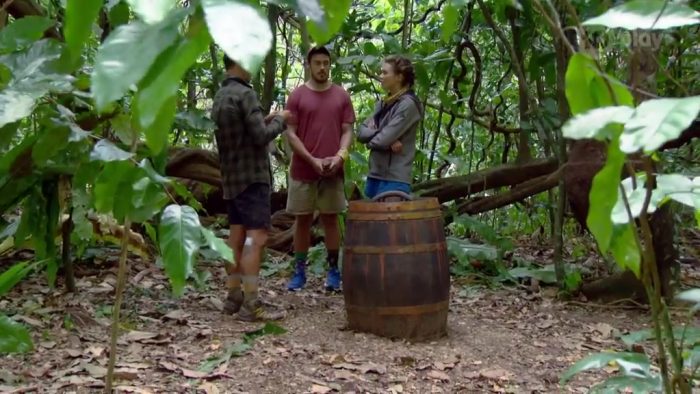 The burden of responsibility for this vote fell firmly on Flick, Harry, and Shonee, all of whom eventually voted on the side of Locky, Brooke, and AK. The better question is whether this was the right thing for them to do. There are a few things at play to consider—firstly, whether Flick’s vote was ever really up for grabs. I thought it was ambitious for Mat to go after her vote, even though his reasoning was steady. So far, Flick has been under the radar (the only castaway left in the game without a confessional) and, as such, the only castaway who hasn’t shed any light on her game plan. Although Flick may be on the bottom of her alliance, at this stage of the game, is it acceptable to be at the bottom of a majority? If Flick defected to Mat’s alliance, she is not only a massive target for the members of her previous alliance, but she is jumping from the bottom of one alliance to the bottom of another. So I think Flick’s decision to maintain the trusting allies that she already has is sound.

The second thing to consider is whether it’s in Shonee and Harry’s best interests to vote as they did. The past two votes have granted Shonee two wishes—to get out two people intent on voting her out of the game. With these initial enemies out of the way, it has become more a game of advancing further and solidifying allies. Harry quibbled over timing, and I think his point is valuable, the aim at this stage of the game is to get to the merge where there’s usually an upheaval in the status quo. While a group might aim to go to the end together, for now, the goal is to simply get further. Without Flick on side, the vote could have ended as a 4-4 tie and a precarious path further through the game. Up until now, John has been against Shonee (and even voted her out just last week), so it is a tough call for her to join him in an alliance. Mat did his best to organise an attack on Locky, but it probably was never likely to go through when safety in a majority was on offer for the three votes he badly needed. 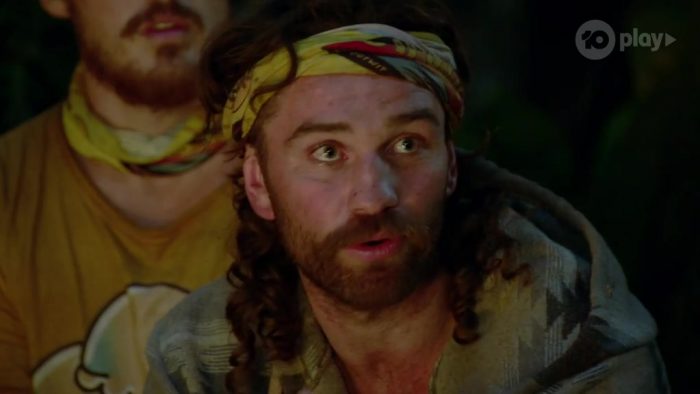 NOT EASY BEING GREEN

Meanwhile, on the green team, Phoebe has returned in a blaze of glory—and not everyone is happy about it. Phoebe staying in the game has cracked open the multitude of plans from the previous Tribal. Phoebe surviving ruined the blindside planned by Moana, who happened to be the target of Nick, who himself was the target of David. To bring it all full circle, David counted on Phoebe to be his best ally and, even though Phoebe physically stayed, his best ally is gone now that she’s revealed her loyalty to Nick. Phoebe would like to try and win David back, but the Golden God is being a real grumpypants about the whole betrayal. His options were previously Nick, Phoebe, and Moana. In one fell swoop, he’s managed to alienate Nick and lose any trust he had in the ladies.

Where Phoebe has failed, Moana has prospered. Mo has been really impressive this week—her goal remained very clear throughout: to remove a threat in the game (Phoebe) while bringing another threat into her allegiance. In Moana’s words, she’d prefer to be working with David than against him, and she’s woven a few lies to bring him closer. 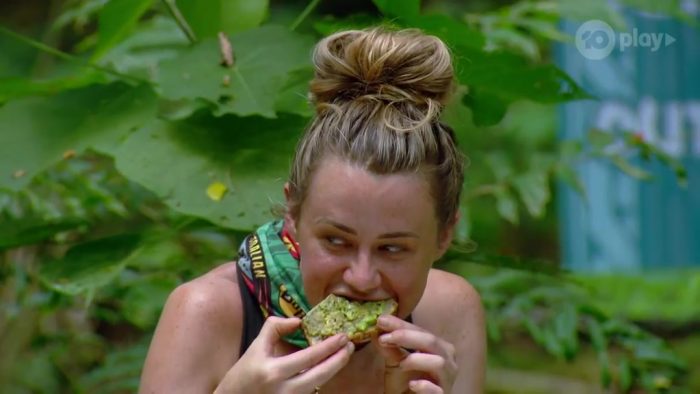 However, while Mo talks of her future plans, David goes fossicking in the jungle and finds some buried treasure. Or maybe it was in a tree, I was a little distracted at the time, but he has an idol now, and it’s given him back his mojo. David’s demeanour changed totally once he had the idol in his hands—he went from hunched and gloomy to open shouldered with fire in his eyes. Despite being essentially alone within his tribe, David is ready to take on the game with renewed vigour.

THERE’S A TWISTER COMING THROUGH

Come with me for a little wander down memory lane. A few years ago, the Australian Survivor series rebooted with a multi-night format and a cast almost double the size. Along with the reboot came some producers with itchy fingers, and with the itchy fingers came twists. So many twists. Castaways were voted onto the other tribe. A castaway was stolen out of Tribal to join the other tribe. One tribe got to divide all castaways into two new tribes (which ended up being the same two tribes as before, except for one or two differences). Moral dilemmas. Every episode the tribe spoke and it seemed like every episode there was another twist. At the time, I appreciated the producers’ willingness to throw everything at the wall in the name of Survivor, but by the end of the season, I was a little sick of how many times the game had been turned on its head. 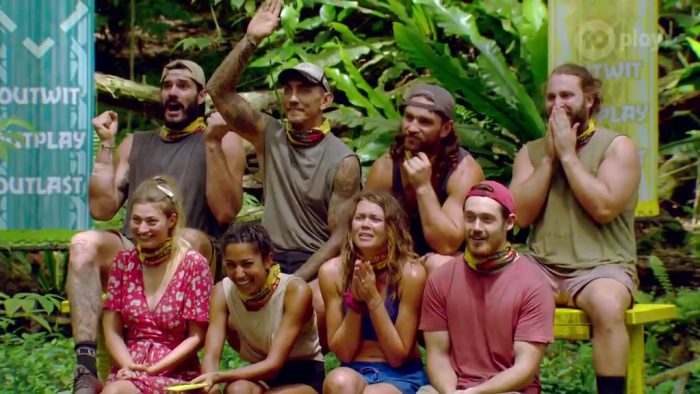 This week has seen several twists: Exile Island, the return of two castaways voted out, a tribe swap, Pandora’s Box, both tribes together at Tribal Council, and then a fire-making challenge to determine who went home. It’s a little tiring trying to keep up with who is positioned where in the game. I appreciate the show when personalities shine and human conflicts are at the forefront. This cast has no shortage of either—many castaways have history with another, but there hasn’t been much chance to see how these stories are playing out when episodes are too cluttered with twists. Hopefully, the twists will take a break now, and the game’s course can return to being more organic. The last thing I want is for a twister to rip-up an All-Stars season.

WHO IS IN THE SPOTLIGHT?

The past few episodes have seen a few fresh faces in the spotlight. Moana has had a solid two episodes going from Mat’s sidekick to mastermind. Her game instincts have been strong in planning a blindside, recruiting others to her plan, and then smoothing over the fallout. Even though she’s the most against David, he perceives her as an option moving forward, which is more than can be said for any others. Mat continues to play a pivotal role and not just because he has a constant rival (until he votes them out/they get swapped to another tribe and he finds a new one). John had a fun episode discussing all things Mexican parmas, beers, pizzas, allies. Phoebe is sliding into the role of villain despite winning fire-making—even though David is the rogue unit intent on chaos—and her choices at the auction have only pushed her further into this role.

In the shadows, there are some worthy players that I think deserve a little more credit than they’re receiving. AK is a key member of the “beautiful people” Vacama alliance and is known as the “brains” of that group, even though his reputation coming into the game was being a snake. His social game seems to have been really strong to ingratiate himself, including being chosen by Phoebe to join her reward at the auction. Sharn, a triple threat from the year before last, has been under the radar. Her name has been brought up as a target several times but nobody has made headway in getting others on board to vote her out. I’d also like to give Brooke a shout out—the smallest woman on Vacama has been the last woman standing in the past two Immunity challenges. Brooke, I doubt you are reading this, but if you are ever looking for more personal training clients, I would love to have you train me. You can contact me through this article or Twitter. I’ll try not to geek out, I promise. 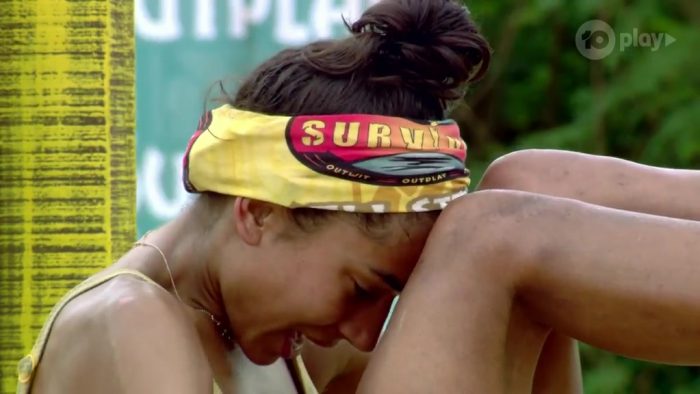 There are seventeen castaways left in the game, and every one of them is there to play. Nobody is content to take it easy—everyone has their eye on someone who needs to leave, and most have some ideas about how they might get their way. We’ve seen lots of stellar challenges, including the Survivor Auction, which has disappeared from the US series. There was a twist in the auction (of course) designed to drive wedges into each tribe, which I wasn’t a fan of, but to see it happening was a small joy that reminded me of the early Survivor days. I also expected some kind of immunity idol clue or challenge advantage to come out in the auction which would’ve set a real cat among the pigeons back at camp, but all the auction items were food, beverages, and comfort.

Three weeks in and it still feels like we have barely begun the season. I can’t wait to see what will happen next.